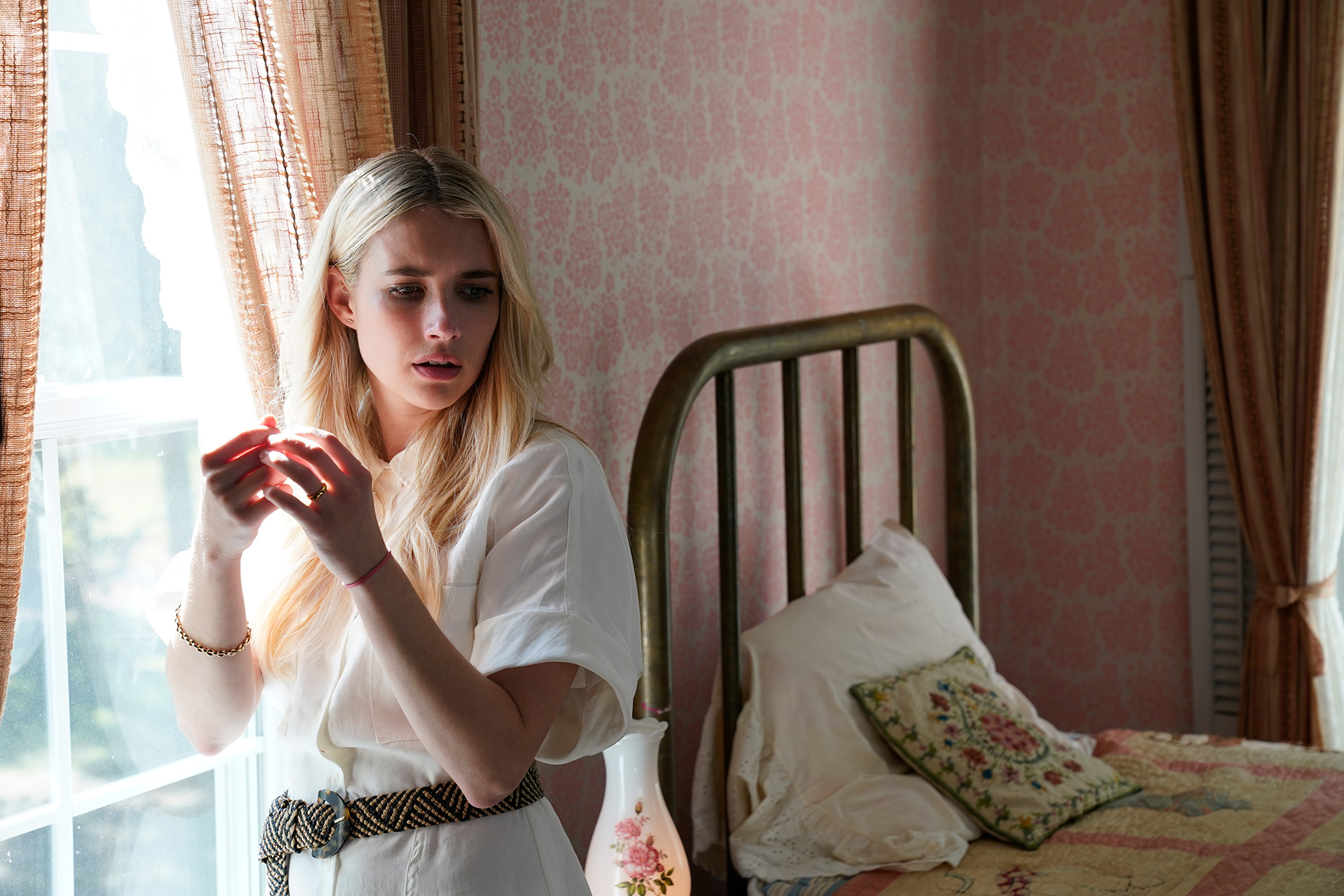 A former preschool teacher from “the city,” Sara Davis (Emma Roberts) had been told by so many parents of the euphoric sense of love they cultivated the moment their child was born. She hoped it would wash over her upon giving birth to her and husband Alex’s (John Gallagher Jr.) son Liam. But it simply never presented itself. It eluded her to the point of seeing a psychiatrist about postpartum depression and he agreed there was a problem. She subsequently rejected the idea of medication due to breast feeding being the only time a connection seemed possible. So the Davises decide moving to the country might jog her out of her “funk” instead. Perhaps purchasing the site of a murder-suicide wasn’t the best throw-in value, though.

Abandoned director Spencer Squire and writers Erik Patterson & Jessica Scott do, wielding the parallels between supernatural hauntings and those brought on by psychological distress to push their lead into a corner she might not be able to escape. They focus on the notion of psychosis bleeding between Sara’s amplified anxiety and frustrations concerning motherhood and the tortured ghosts of a dark past. Is she hearing things because the spirits of Robert Solomon, his daughter Anna, and their incestuous baby remain restless 40 years after the violent double-homicide and suicide that severed them from their bodies? Or is her mind manipulating her to believe ghosts are responsible for her own misdeeds? Possessions are misplaced. Liam is left in precariously dangerous situations. And Sara feels utterly alone.

It’s an intriguing conceit. Blurring that line provides Sara an excuse so far-fetched that Alex has no other choice but to worry she’s about to do something unforgiveable. Rather than use the haunting as a metaphor, however, the filmmakers overtly label Sara’s condition and make it crystal clear that she’s been avoiding its severity. This doesn’t seem like a big difference, but it proves catastrophic at times due to the conscious comparison points that result. It’s one thing to deliver a haunted house film that serves as the manifestation of a mother’s pain. It’s another to put a troubled mother inside a haunted house and draw lines between them. The former creates genre brilliance like The Babadook. The latter forces us to treat the mother like a monster.

I’m not saying Squire and company did this intentionally, but there are two separate threads making it a reality, nonetheless. The first comes via Alex and a subplot that inevitably provides him “innocent” status. One of his new clients is having problems with a litter of piglets and he provides two options of figuring out what’s wrong: blame the mother and eliminate the litter or blame the father and eliminate only him. The latter is more cost effective, so that’s what he does. Alex slaughters the pig, tests it in his lab, and discovers it was fine. The mother is therefore the issue and now he must kill her and the babies to ensure no problems occur in the future. He dreads his role in doing so.

The second thread concerns deceased former owners of this house. Unlike Alex, Robert had no qualms with violence. He was a despicable human who caused unspeakable harm to his daughter, and she eventually killed him for it. In so doing, however, she became the “culprit.” She’s the murderer, tragic reasoning or not. She took her baby’s life. Not only that, but we’ll soon discover more secrets about the Solomon family that ultimately jam Sara into the shoes of both Anna and Robert. While it might be Sara’s own mind making this comparison, it doesn’t excuse the film from letting her be painted as the “problem” despite having no control. Add an abruptly bow-tied ending and Abandoned pretty much says control was always hers to take.

Rather than read the supernatural elements as postpartum, we have no choice but to equate postpartum with the heinous crimes inspiring those elements. It’s a false equivalence that’s manipulated for a moment of epiphany wherein Sara can finally forgive herself and break free from the psychosis that’s taken hold—a means to an end that unfortunately cannot shake the damage of those means. Not that the film is necessarily memorable outside those constraints. This is a very slow-moving work that leans heavily on auditory scares rather than visual ones, the whole akin to sleep-deprivation torture. Those moments when Robert “appears” do possess some welcome animosity, but it never feels “real.” It’s always a distraction from what Sara might (or might not) be doing to Liam.

That is, once again, a product of her psychosis existing alongside that of the house. By creating that dialogue they are always detached. Roberts does a nice job regardless since her performance is on-edge whether she’s dealing with one or the other. She’s forced into a repetitive cycle for the most part, but her emotional escalation gives us a reason to stick with it anyway. Husband-wife duo Michael Shannon and Kate Arrington (sticking together during COVID with this and Night’s End) become effective foils to her deteriorating mind, but both they and Gallagher Jr. are mostly at the whim of the script’s machinations than three-dimensional characters able to come to life. That distinction is left to Sara. Can she reductively flip her postpartum switch?

Abandoned opens in limited release on June 17 before hitting VOD/Digital HD on June 24.