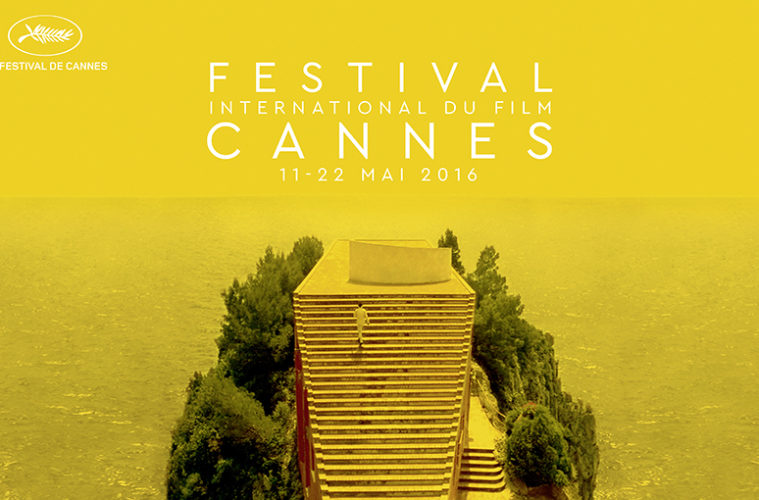 In just about three weeks we’ll be getting the line-up for the 2016 Cannes Film Festival, but first, the official poster has landed. For the 69th Festival de Cannes, featuring a jury presided over by Mad Max: Fury Road director George Miller, the yellow-tinted poster honors the Jean-Luc Godard classic Contempt. Check out the description below, along with a full version of the poster.

It’s all there. The steps, the sea, the horizon: a man’s ascent towards his dream, in a warm Mediterranean light that turns to gold. As an image it is reminiscent of a timeless quote by Michel Mourlet used at the beginning of Contempt: “Cinema replaces our gaze with a world in harmony with our desires”.

And so it is Michel Piccoli who in 2016, from the roof of the famous villa designed by the writer Curzio Malaparte, will open the red carpet for the 69th Festival de Cannes. It’s a symbolic choice, since this film about the making of a film – regarded by many as one of the finest ever made in CinemaScope (the Piccoli/Bardot pairing along with Fritz Lang, Raoul Coutard’s cinematography, Georges Delerue’s music, and so on and so forth) – had such a considerable impact on the history of film and cinephilia.

On the eve of its 70th anniversary, by choosing to represent itself under the symbol of this simultaneously palimpsest and unambiguous film, the Festival is reiterating its founding commitment: to pay tribute to the history of film, and to welcome new ways of creating and seeing. The steps represent a kind of ascension towards the infinite horizon of a cinema screen.

This 69th Festival de Cannes poster has been designed by Hervé Chigioni and his graphic designer Gilles Frappier. The 2016 visual identity has been created by Philippe Savoir (Filifox).