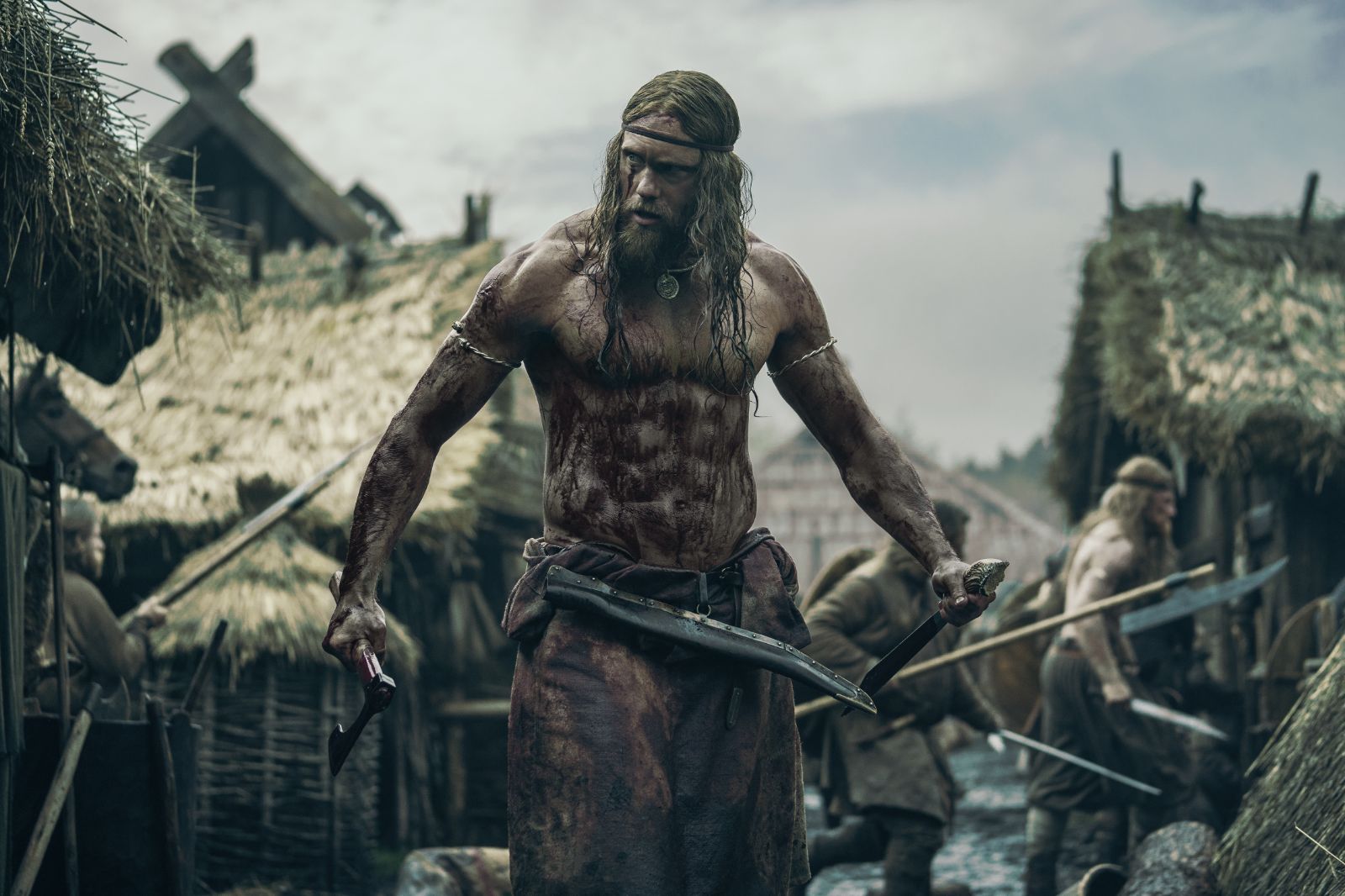 Whether the dread-inducing rituals of witches or a turpentine-fueled descent into hysteria, Robert Eggers’ cinema is of unflinching immersion. Trapped in the center of symmetrical frames and surrounded by immaculate production design, the only escape for his characters’ fury seems to be bounding off the screen onto the audience themselves. The effect oscillates between entrancing and grating, wearing one down until there’s no choice but to succumb to the mania and plunge into the madness. A considerable step up in scope, his third feature The Northman gratefully bears scant touches of a compromised vision, delivering a bloody, visceral Viking epic that utilizes a simple revenge template as the canvas to examine the contradictions of a hero’s journey.

“I will avenge you, Father. I will save you, Mother. I will kill you, Fjölnir.” These already-memed few sentences are all the synopsis one needs, setting up the story developed by star Alexander Skarsgård and producer Lars Knudsen and scripted by Eggers and Sjón, based on the Scandinavian legend of Amleth. Eggers gives no consideration to steady acclimation, immediately dropping us into a fully realized Viking world circa A.D. 859, complete with ceremonies involving burping and farting to prove one’s humanness and a barbaric life haunted by death that could arrive at any corner. It’s a startling, perhaps rushed beginning that takes a beat to find its footing, but once this prologue concludes––featuring a young Prince Amleth (Oscar Novak) witnessing the murder of his father (Ethan Hawke) by his uncle and vowing a life of revenge––we jump years later to a hulking, deeply committed Skarsgard portraying the Prince. With a masterfully executed single tracking shot peering from the woods, then gliding across the water to introduce our hero on a Viking long boat, its rhythm clicks into gear and rarely lets up from there. Now a Viking berserker pillaging villages, Amleth has become a hollow shell of a human; Eggers accordingly gives the horrors in all their unflinching depravity.

From munching into flesh for a death knell to the remaining villagers corralled into a locked cabin and hearing their screams as it is set on fire, a bleak tone is set quite early. But unlike the aimlessness of a similarly dire revenge tale, Alejandro González Iñárritu’s The Revenant, and all its faux-Malickian philosophical overreach, The Northman stays studiously focused on the journey at hand and, in effect, has far more to say about the dark side of vengeance. As Amleth contends with what life means when rage has warped you into a beast fueled solely by revenge, the film sets itself apart from Viking epics that have come before it, many of which had little concern for the interiority of their characters. Eggers also, thankfully, has a bit of fun. Nicole Kidman more or less registers as a background character until she emerges with the best scene, turning the entire narrative on its head with a cheekily entertaining, scenery-chewing monologue. The film’s chapters, written in the runic alphabet of Elder Futhark, exhibit such titles as the grin-inducing, violence-portending “The Night Blade Feeds,” while Knattleikr, a Viking ball game of crushing savagery, offers a satisfying, bone-crunching mid-film diversion.

Working on a far larger scale, cinematographer Jarin Blaschke captures the lush Nordic landscape in all its viridescent glory. There’s a strong use of negative space, whether it is Amleth teetering on the top of a barn in the corner of the frame or when he’s a speck in the vast wilderness. The charcoal-grey nighttime look gives a feeling of tones etched into mythic history. Dancing rituals around a nighttime campfire and forest orgies feature glimmers of lights in the far distance, giving mysterious depth to this world. While not approaching Hard to Be a God-levels of suffocating muck, battle scenes are engrossing in their one-take prowess. Never over-extended to the point of extraneous flaunting, they help guide this singularly-focused journey while providing both Skarsgard and Claes Bang (Fjölnir) an ample showcase for action-choreography chops.

Fissures do present themselves—not least of all a recurring CG-heavy vision of a family tree that plays like unnecessary connect-the-dots material to appease a wider audience. While Björk and Willem Dafoe make an impression in their brief scenes, one wishes they were given more to play with. Anya Taylor-Joy––portraying Olga, a fellow slave with Amleth and a love interest along his winding journey––has more screentime than expected, but her character is rendered as little more than a spiritual sounding board for our lead. Yet it feels like a small phenomenon that Eggers was able to convey such a precise, graphic vision on this scale. With a strong sense of authenticity and purpose, The Northman is designed to unnerve and repel. In a wide release landscape of easy-to-please, vaporous entertainment, such feats should be celebrated.

The Northman opens in theaters on April 22.