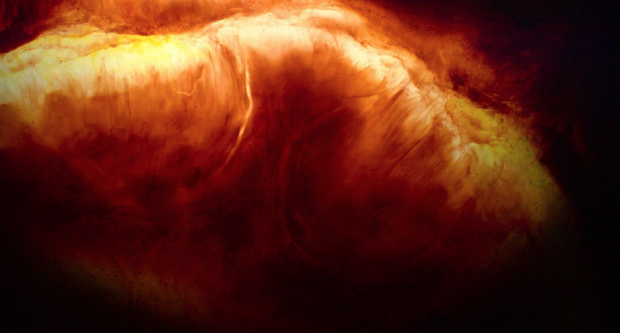 The Making of Terrence Malick’s Ambitious Documentary ‘Voyage of Time’

After working on Voyage of Time for the last few decades — a minuscule amount of time compared to the nearly 14 billion years the film depicts — Terrence Malick will finally debut his long-gestating documentary at the Venice International Film Festival, followed by a just-announced screening at TIFF before it arrives on IMAX screens on October 7.

The two separate versions will offer rather different experiences: the 90-minute cut, titled Voyage of Time: Life’s Journey, is narrated Cate Blanchett, featuring voice-over that is “more searching and poignant, an urgent inquiry from a child of earth to the mother of all.” The other is the 40-minute Voyage of Time: The IMAX Experience, featuring “more awestruck and explanatory” narration by Brad Pitt, but both are said to “evoke a kaleidoscope of impressions and emotions.”

Ahead of the premiere, we’ve received new details on the film. First, here’s the latest, extended synopsis:

The unfolding of the universe takes place before your eyes, in this experience for the senses, mind and soul.

A labor of passion by director Terrence Malick (Days of Heaven, The Thin Red Line, The Tree of Life), Voyage of Time: Life’s Journey is an exploration into our planetary past and a search for humanity’s place in the future. Humming with the energy of nature itself, the film melds innovative special effects with awe-inspiring footage from around the globe, in search of what lasts, what endures through time’s changing scenes.

What does it mean, after all those eons, to be us, here, now?

The action traces the scientific chronology of earth, from the birth of the stars to the explosion of new life, to the planet-altering debut of humankind. Malick invites audiences to probe past, present and future in intimate ways. Working with a team of scientific advisors and visual effects artists led by Dan Glass (The Tree of Life, Batman Begins, The Matrix Reloaded) the film shows an array of never-witnessed natural phenomena – celestial and terrestrial, macroscopic and microscopic – in a variety of new ways.

The fierce geology of the early planet. The first cells, growing, dividing, exploring every niche open to them. The coming of fish, forests, dinosaurs and our own species with its need to reckon with everything – all this transforms into a hymn to nature, life and the universe. No two people will have the same experience.

As is usually the case with his work, early on in the process, there was no script. Rather, in order to reflect his intended tone , Malick sent the following two quotes from a pair of history’s brightest minds to producers Sarah Green and Nick Gonda:

Is no one inspired by our present picture of the universe? Our poets do not write about it; our artists do not try to portray this remarkable thing. The value of science remains unsung by singers: you are reduced to hearing not a song or poem, but an evening lecture about it. This is not yet a scientific age.

The most beautiful thing we can experience is the mysterious. It is the source of all true art and science. He to whom the emotion is a stranger, who can no longer pause to wonder and stand wrapped in awe, is as good as dead — his eyes are closed.

While Malick teamed with a number of top scientific doctors and professors, including those from MIT, UC Berkeley, Cambridge, and Caltech, in the development process, his lead scientific adviser was Dr. Andrew Knoll, the Fisher Professor of Natural History at Harvard University, a NASA consultant, and author. “I once joked with Terry that if I were to make this film myself it would not even resemble his,” Knoll says. “It would probably look something like what you’d see on a PBS Nova episode — covering the typical bases of what we know, how we know it and when it happened — but that’s not Terry’s mission. His film asks something else entirely: how do we, as the products of this long evolutionary process, think about that process? And he explores that question through the most wonderfully evocative images I’ve ever seen, and probably ever will see. It is easily the most different and distinctive telling of the story of life’s story that exists.”

“My job was simply to make sure that Terry got the science right,” Knoll adds. “What you see on the screen is all Terry’s creative genius, but he would send me treatments and I’d comment on them very specifically, and we talked over a lot of ideas. There are things we don’t know about the early earth and there are many things we know very well. I’m not aware of anything in the final movies that are out-of-sequence or stray far from the moorings of what scientists understand at this point. There are some uncertainties of timing that are debated – did the first cells evolve 4 billion years ago or 3.5 billion years ago? But in the context of the film those questions don’t really matter because the film takes you into the process of life evolving.”

As for his thoughts on the final film, he concludes, “In some ways, I think Terry has been building to this film his whole career – and now it seems he has reached that place to which he has always been heading. I’ve seen most of his films, but without question I like Voyage of Time best of all. This is a film you will be thinking about a long time after the lights come up.”

Giving another opinion on Voyage of Time is theoretical physicist Lee Smolin of the Perimeter Institute, who also consulted on the picture. He says, “As a scientist, I saw nothing that seemed wrong; the simulations of the early universe and of star and planet formations are consistent with my understandings. It is beautiful and inspiring … The interweaving of contemporary scenes with the history of the universe seems very appropriate. It raises the question of what we value, and how we decide what we value, against the history of life and our universe.”

For the visual effects in this ambitious documentary, Malick teamed with Dan Glass, who has previously worked on visual effects for Mission: Impossible films, the Matrix sequels, and previously with the director on The Tree of Life. They were presented with four main visual challenges:

Creating the astrophysical imagery before the solar system we know existed, and then conceiving and visualizing the futurescape of our universe referencing the latest theories about our cosmic destiny.

Representing the protoplanetary disk that formed and condensed to become our solar system and the planets it contains.

Imaging the first unicellular forms of life in all their majesty and motion, which would learn to replicate and form increasingly complex organisms.

Reconceiving animals that no longer roam the earth, convincingly blending them with analog equivalents where they exist today.

To help with this process, Glass and Malick they created what they called “Skunkworks” for photographic experimentation. “These were literally chemical experiments we were doing, to see how various liquids, dyes, gasses and fluids might behave as we filmed them at high-speed. We used everything from gels and glass to smoke machines and fluid tanks to create a whole range of effects,” Glass notes.

One of their main inspirations was the rich work of 19th-century painter Albert Bierstadt, so much so that Malick referred to their work as “Bierstadting.” “We wanted that richness Bierstadt had, so we would layer and layer and layer in subtleties – be it tiny debris in the cosmos or floating particulates at the microbial level,” Glass says. “From the earliest days, I remember Terry saying that he wanted the feeling that every shot in the film was drawn by a different artist’s hand. That idea was very exciting. So we set out early on to actually bring in a lot of hand-picked artists and artisans to contribute a lot of different, original ideas.”

See a gallery of Beirstadt’s paintings below:

Lastly, although it was reported that Ennio Morricone would be re-teaming with Malick to score the project, his name isn’t found in any credits at this stage. Instead, it looks as if the director worked with sound designer Joel Dougherty to “weave natural and speculative sounds into the film’s universe” and music supervisor Lauren Mikus to “choose a variety of instrumental pieces that evoke the swirling, swelling, creative energy of life at both ends of the magnitude scale.” While the full track list is not yet available, listen to some of the mentioned selections below:

Bach’s Mass in B Minor

The music of Arvo Part:

The music of Keith Jarrett:

Following Venice and TIFF, Voyage of Time opens on October 7th. See the IMAX Experience trailer above, the Life’s Journey one here, and check back for our review.