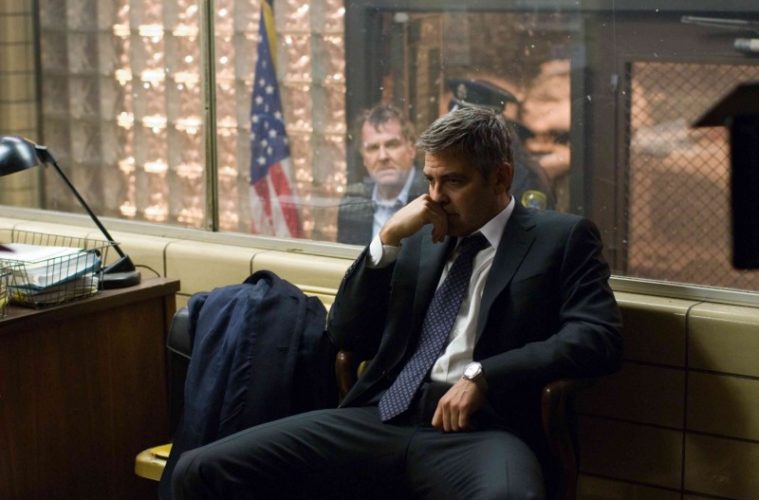 The Enduring Exhaustion of ‘Michael Clayton’

One of the most powerful states explored in cinema is the state of exhaustion. Being tired. Tired of work. Tired of bad choices. Tired of life. In every sigh, glance and line read does George Clooney convey this in Michael Clayton. Early on, the corporate fixer takes calls from clients and institutes shadowy moves without a second thought, bored by the process. That the film is bookended by his slip back into gambling is no surprise. There’s a clear circular nature to this man. A spinning of wheels slowly sputtering to a stop. Whatever good he may do should’ve been done years before. The matter-of-factness within this world of corruption recalls masterworks like Sidney Lumet’s The Verdict, in which good and evil exists only in the margins. Whether it be a hitman or a cop, stooge or bookie, everyone in Michael Clayton is very much doing their job. There’s no drama in the motivations, but rather in the results.

An absolute peak for Clooney and an impossibly confident directorial debut from Tony Gilroy (not to mention the source of Tilda Swinton’s Oscar win), this film stands as a perfect fusion of social engagement and Hollywood entertainment. Seeped in cynicism but crackling with immediacy, the subject matter recalls both post-war noirs and 90s thrillers. The titular character would be a fairly standard antihero were he not George Clooney. And while the actor has done his best to fight against traditional movie star roles for the majority of his career, here we find him doing what he’s always appeared genetically designed to do: anchor an old-fashioned studio yarn. Only this yarn has been elevated by intricate scenes of dialogue and patient cinematography. The entire picture is lit in muted tones, conveying a slick brutality so often associated with the business world. Cinematographer Robert Elswit frames his subjects in hard close-ups, leaving them nowhere to hide.

This is movie about America, the people who run America and the people who help the people who run America. A decade after its release, wrapped in this current moment as centuries-old patriarchal systems begin to falter a bit under the weight of sexual abuse, the context of the film feels more immediate, the decisions throughout a bit more pointed. In the real world, questions abound with each news story, many revolving around who knew and why did they do nothing? Michael Clayton knew everything, and did plenty to help the bad guys. Swinton’s Karen Crowder lays out his path for the viewer: his progressive beginnings as a young lawyer at the District Attorney’s office quickly upended by the money and opportunity available in the private sector.

Following the “mental break” of his friend and colleague Arthur Edens (a remarkable Tom Wilkinson), Clayton faces a crisis of conscience. There’s no question of the deep-seated badness of his situation, but a question of escape. Can this man find his way back? Make it right? Gilroy is not interested in answering these questions as much as wading in the search for answers. Clayton is too deep for too long in too dark a business, making his search all the more dire and fascinating. Consider a scene about halfway through the picture, when Clayton turns to his son Henry in the car after a run-in with his addict brother, Henry’s uncle. “You’re not going to be one of these people who wonders why shit keeps falling out of the sky around them,” he tells Henry. It’s less of an observation than a hope. A prayer from a father to his son.

As the narrative pushes forward, we watch one character fight against the current of old sins while another dives headfirst into some new, horrifying ones. Swinton’s turn as a rising star at a deadly chemical company is the stuff of legend. The ying to Clooney’s yang, her Karen Crowder is a version of Clayton years before: smart, ambitious, brutal. And as she burrows down the rabbit hole in trying to stem a potential scandal, that state of exhaustion rears its ugly head.

Gilroy’s placed very few “good people” in this movie, but goddamn if they’re not easy to understand and sympathize with. Despite the macro themes at play in this film, nearly every moment is focused on the micro. Specific people with specific problems, regrets and victories. Being alive is a long, tired slog. That Michael Clayton makes it entertaining is a miracle.