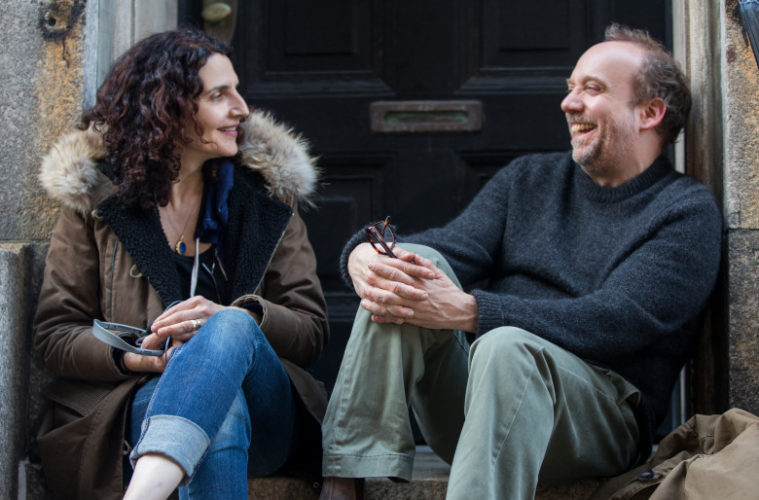 Tamara Jenkins’ Private Life opened an unusually strong Sundance, one that produced the top-grossing documentaries of the year and award-season contenders. Kathryn Hahn and Paul Giamatti play Rachel and Richard, a middle-aged, New York-bohemian couple being pushed out of the city by their own changing interests and crushing fertility crisis. Things go from bad to traumatic when their loving niece Sadie, played by Kayli Carter, promises to be a surrogate for the child.

We spoke with Jenkins about Sadie’s plan to save her aunt and uncle’s dream to be parents and its unexpected consequences. Jenkins jokes about being an “Old Testament God” kind of storyteller, who inflicts reality on her characters, coating the brutal outcomes of their expectations with humor and grace. And Jenkins talks about age winnowing one’s tolerance for a chosen, lower-class, artist’s life in New York City.

The Film Stage: I want to talk about Kayli Carter’s character, Sadie. She’s the truth-teller in the family and she doesn’t really know when she’s telling it.

Tamara Jenkins: I think one of the things that’s sort of interesting about her function within the story, is that she appears in these people’s lives and the people, she appeared in the life of Richard and Rachel, who are kind of in the middle of some form of mid-life crisis. It’s like a mutual mid-life crisis and it happens to be informed by their fertility crisis. I think they have so many doubts about where they are in their lives. And then this person shows up and the way she sees them is so the exact opposite. She completely romanticizes,  everything’s exciting for her. She’s in New York, which is sort of pounding these people down, but she finds the idea that they’re living outside the mainstream as an artist couple in a very positive light. It’s kind of an interesting impact she has on them, she almost refreshes them. Obviously, she’s young so she injects this kind of energy into their lives.

Casting Sadie was interesting because an actor fell out of the movie very close to production and we were in a crisis where we didn’t have an actor. Our casting director went on a search for an actress and it was very hard. Obviously, there were great actors but no one was really clicking and Kayli Carter was almost the last person we saw. The story is Kayli was doing a play in London, she was acting with Mark Rylance. She had just got back to New York, like very close to that end of line for us. She went in and she read her and when I saw the audition tape I got really excited. We saw her a bunch of times because she didn’t have a body of work that I could refer to.

I was so excited but also nervous because she was a new kid. I really liked her and it was very clear she was our favorite person. And then we had to tell Netflix she was our favorite person and I think we were worried they would want somebody who was more well known or known, period. Because that’s what normally what happens. It ended up they thought she was great and she had a part in a Netflix series called Godless which was in post-production. So it hadn’t come out yet and I hadn’t seen it. The word at Netflix was she did a good job on that show in a smaller part and so we got to go with her.

Why is that you think Sadie, with her openness and willingness to help her family, has such a devastating experience?

Well, I don’t know. I mean, I think that she’s hurt, there’s a lot of things going on. But that’s an interesting question. You’re saying from an author point of view, “why did you not let her have a happy ending?” I think she has a happy ending, ironically, but I do think the process, the whole chain of emotional stuff that’s going on in terms of her realizing how much it means to them to have this thing work out, her discovering that it’s not happening.

She flies in and thinks she has to be this great savior and it’s going to be this beautiful thing, but life is very complicated and it doesn’t work out that way necessarily. Her eggs weren’t developing on schedule, so it’s not so easy to swoop in and I think that’s honest. She tries to overcompensate by almost endangering herself for sure. She really puts herself in a bad situation and she really is a young kid. It’s a complicated arrangement with this older couple and what they’re doing. I don’t think it’s like oh, she’s being punished, I think it’s reality. It’s not like I’m a mean God [Laughs] playing this puppeteer.

Yeah, exactly. “This hopeful creature will be bashed down!” In the end she’s pursuing her art and she kinda gets this great gift at the end, going to this artist colony and getting this beautiful room and being taken seriously, which is really what she wanted all along, no one was taking her seriously as an artist. I mean her mother for instance. The only people that did take her seriously were Richard and Rachel.

I think it’s interesting that you’re also talking about the end of the movie. It’s like a Rorschach test because people respond to the movie in very different ways. You feel like it’s “Oh, my God, it’s just this cycle of the same thing over and over again.” But I actually don’t think it is.

I think that the end of the movie is actually a very different place. First of all, I think their lives are definitely hijacked by this experience, which is very typical of people that go through assisted reproductive technology. I think that it lures you deeper and deeper and you might draw a line in the sand and think, “okay, I’m not going to the next step” but then they do because there’s a chance, just like the doctor said, all you need is one good egg. It’s like compulsive gambling. Maybe if you try this one time it’ll work. I think that’s really honest and true.

At one point the doctor said, “We can try a donor egg,” and then they walk down the street and she says there’s no way in hell I’m going to do that. He says we might want to just think about it and she’s like what are you talking about?. We said we would never do it. He said, no, you said you would never do it. I kept my mouth shut because I didn’t want to make you do something you didn’t want to do. But it seems like statistically it’s kind of a good idea. He’s being realistic and saying let’s put our odds on the better odds, we should do this, let’s put our money on the debt and we should do them so that. About him saying I don’t want it. Then there’s a later scene where he says I’m glad the egg didn’t work.

And then at the end of the film when they get a phone call from a birth mother who wants to meet them, that they’re having some kind of relationship with. I always feel like the scene at the diner when Paul gets up and crosses from the other side of the booth and he lives down with Rachel, to me that’s the happy ending of the movie. It’s a muted happy ending, but it’s a happy ending, that this thing that really feels like it’s fracturing this couple and destroying their marriage didn’t do it.

Baby or not baby to me is almost irrelevant because the movie is about a marriage and it’s about the survival of a marriage. When we were shooting the movie Paul Giamatti said this isn’t even about the baby, this is Waiting for Godot. They’re journeying through the world of infertility and it pushes all of these buttons and it’s a very intense kind of trial and it puts their marriage in an extreme state.

Were you watching the movie alone, streaming it?

It’s a bad way of seeing the movie because it’s really funny and you probably didn’t feel any of that.

Oh, no, I laughed so much. More than at any movie this year, to be honest.

Oh, my God, that’s so crazy! I was thinking, oh, my God, something hit him and he was going down a dark hole of pain. I’m glad it made you laugh.

Richard and Rachel are a pretty open, progressive couple, right? But they have this desire for a baby at all costs, which seemed very traditional.

I have a question for you: How old are you?

I think that something happens to people… it’s true, I wouldn’t be like that at thirty-one either. When you have this sense that your entire life is in front of you and you’ll have a baby one day… these are people are in a very specific socio-economic kind of reality and they’re very much like all the people in my world, who had very unconventional lives, and have freelance lives, probably not unlike yourself, journalists, writers, artists that don’t have a kind of secure, regular way of making a living. Their lives are very insecure. They don’t have health insurance, they’re living by the skin of their teeth, and the only reason they’re staying in the city is because they have a rent-stabilized apartment and their life has always been about their work.

Then suddenly they wake up and they’re having some sense, which you will probably have — I’m not saying everyone has this — almost like they’re outgrowing their original placement in New York. Like way they got there when he says, “Oh my God, I don’t want to walk the dog at night, it’s all party people. All the bars are opening and I don’t want to find myself fifty at some block association meeting trying to prevent the opening of a new bar.” Rachel says we’re not going to turn fifty in this apartment and he says “I’m forty-seven!” Like what is going to change in three years? Nothing. It’s almost like they’re being pushed out of the life they set up themselves, kind of like what you were saying, this unconventional life, they’re kind of pushing up against the edges of it and being uncomfortable, like they’re outgrowing it on a certain level.

Sometimes there’s an irrational thing that happens to people that it’s completely… it’s irrational that anybody would want to have a child, they just want to. There’s nothing rational about wanting to have a kid and normal people have sex and have a kid, they don’t have to talk about it, they just do it. But when it becomes something that has to be brought to consciousness and you have to parse out every detail of it, it becomes very different and very strange, and you’re witnessing that. Normal people just fuck! And then it’s like, oh we’re having a kid like it’s this accident. But if you’re not getting it that way it just becomes a much more tortured, weird, self-conscious process, and I think that’s a little bit of what you’re talking about.

Private Life is now in limited release and on Netflix.