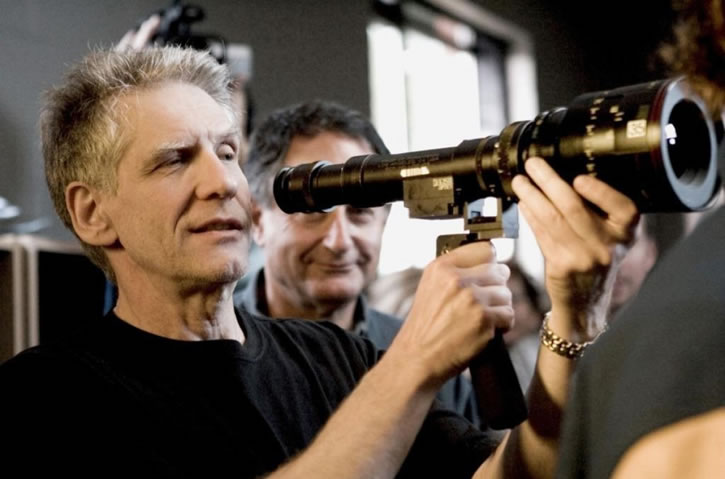 David Cronenberg has begun shooting a new film, and today is officially a good day for cinema. You’ll recall that his social satire / ghost picture, Maps to the Stars, was in casting stages for a few months prior, our most recent report adding the talents of Mia Wasikowska and Olivia Williams to an already stacked lineup — Robert Pattinson (the director’s Cosmopolis star), Sarah Gadon (also of the 2012 picture), John Cusack, and Julianne Moore all being tapped to lead. Everything’s been coming up Milhouse.

With cameras officially rolling — and this endeavor, at some point, seeing Cronenberg make a directing debut in the United States — some fresh, worthwhile information has begun to file in. Of an appreciably spoiler-free manner is the following plot synopsis, which, in widely expanding the scope on Bruce Wagner‘s screenplay, alters a few personal expectations (via TheWrap):

A contemporary tale exploring the demons of our celebrity-obsessed society, story follows the Weiss family, which is led by Stafford (Cusack), a psychotherapist and life coach who made his fortune with self-help books. His wife (Williams) is the overbearing mother-manager of their 13-year-old son (Evan Bird), a TV star recently out of drug rehab. Their estranged daughter (Wasikowska) has just been released from a psychiatric hospital and befriended a limo driver (Pattinson) who is also an aspiring actor.

One of Stafford’s celebrity clients is Havana (Moore), an actress with an unusual new assistant. Havana’s dream of reprising her dead mother’s (Gadon) starring role from the 1960s slowly crumbles while ghosts, death and all manner of vices collide.

Here’s hoping Maps to the Stars is only part two of a Cronenberg–Pattinson “limo trilogy.” Prospero Pictures and SBS Productions have backed the title, for which eOne — yet another Cosmopolis holdover — are to provide domestic distribution. Expect the cast and crew to show off their work in 2014, most likely premiering the title at Cannes.

Update: Check out the first still of Cusack, Williams and Cronenberg on set below thanks to Screen Daily, as well as the first promotional photo of Cusack from Variety. Do you have any first impressions of this plot summary? What are your hopes for the next Cronenberg film?