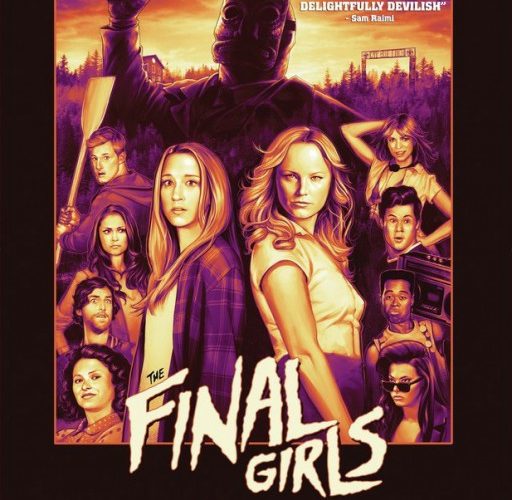 Horror comedy has long been one of the most difficult genres mixes to pull off successfully. For The Final Girls, a high-concept meta riff on the slasher horror films of the 80’s, it mostly makes an intelligent use of a cast that is peppered with familiar faces, all who are driven to actually make this tone work.

Amanda (Malin Akerman) is an aging actress that is most known for her role as a camp counselor in a horror film franchise but she has been typecast and is constantly trying to lose that image. Her daughter, Max (Taissa Farmiga), is the one thing in her life she feels she hasn’t screwed up. When her mom unexpectedly dies in a car wreck, some of Max’s friends a few years later get her to attend a horror film marathon of the slasher franchise that Amanda was so well-known for. But when something goes terribly wrong in the theater the friends end up in the horror film reality itself. That means Max, her best friend Gertie (Alia Shawkat), the high school crush Chris (Alexander Ludwig), film nerd Duncan (Thomas Middleditch), and popular girl Vicki (Nina Dobrev) will all have to band together.

Stuck in the serene campgrounds with the height of the late 70’s and early 80’s style surrounding them, the film takes gleeful stabs at the ridiculous trends and ideas of that era. We learn that the goal of the group is to survive the horror film as things continually reset if they stray too far away from the actual plot of the film. Their goal is to kill Billy, the walking boulder of a slasher in the film’s reality. Again and again, director Todd Strauss-Schulson (A Very Harold & Kumar 3D Christmas) manages to inject a keen sense of humor throughout the film.

Laughs are ample as some of the characters in the film’s world are stereotypes turned up a few more notches. You have Kurt (Adam DeVine), the dumb jock that wants to bone everything with two legs; Tina (Angela Trimbur), the dumb slutty girl that always wants to dance suggestively; then there is the black nerd Blake (Tory Thompson); and the badass girl Paula (Chloe Bridges). Amanda plays a young virgin girl that is hoping that her time at the camp will change her life. Sex is the focus of Billy, as anytime the characters make moves on each other, he seems to appear.

Needless to say, Billy is constantly a threat and yet he is never all that terrifying. In fact, the film itself never embraces the horror aspect, straining too much on its dopey nature. As the gang is trying to keep the counselors alive while they stay alive as well, the horror film expert of the group, Duncan, is the one that does most of the heavy lifting early on and he is easily the most excited about the weird situation they find themselves in. Speeding through the set-up, Strauss-Schulson mostly sticks to humor and he let the laughs permeate.

That isn’t to say there aren’t various missteps. The horror is desperately lacking and it’s clear the director was given a budget that, while small, allowed him to create a few amateur-level effects, none of which work very well. One is a warping shot that spins around the characters with noticeable artifacting. There’s also a take after a character’s death that feels completely unnecessary as it flips and spins between two reaction shots. But the most damming of the missteps is that the entire film establishes this relationship where Max gets to reconnect with her mother throughout. It’s a great set-up and interesting to see how Strauss-Schulson handles it, but it ultimately fails.

During a key emotional moment in the film, he manages to take you out again and again by hitting the screen with a phony lightning effect that painfully distracts. However, there’s still some fun to be had thanks to the chemistry between all the great comedic characters here. Nearly everyone gets their moment to shine and even Tina, who is used as a comedic punching bag because of her dim-witted nature, gets a memorable sequence where she dances to a hair metal song in order to attract Billy’s attention.

If you’re in the mood for laughing at some wild antics and seeing horror films skewered in a meta concept, The Final Girls will be right up your alley. Missteps aside, with the vivid imagery around the campgrounds and the slick sense of humor, Strauss-Schulson nails certain aspects. It’s just too bad some of the bumps couldn’t be polished out along the way.

The Final Girls premiered at SXSW and opens on October 9th.