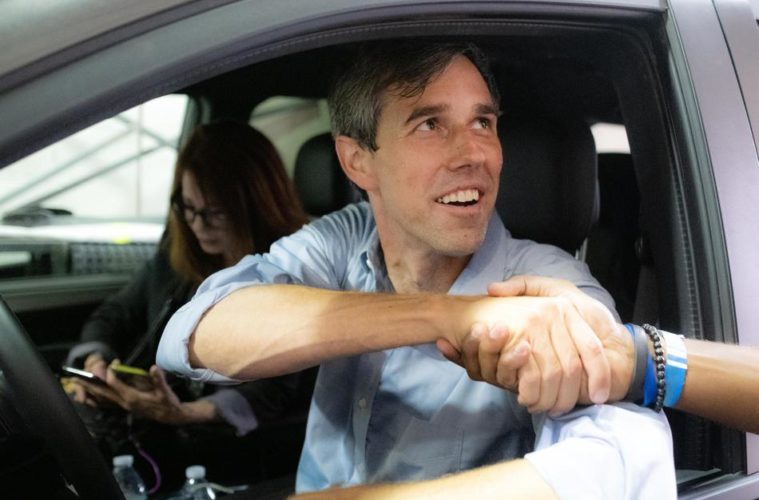 SXSW Review: ‘Running with Beto’ is a Minor Film About a Major Political Star

Showing rather than explaining the greatness of Beto O’Rourke as a retail politician who is both engaging and engaged, Running with Beto might not shine too much new light on the unlikely U.S. Senate candidate from El Paso, Texas if you were paying attention to his 2018 midterm campaign. Beto was an underdog with demographics not quite on his side (yet) who made a go of it by actually campaigning, traveling to all 254 Texas counties in an effort to meet as many eligible voters as he could. He did it the ol’ fashion way, standing his ground even if his stances on universal background checks and the border didn’t play to conservatives.

Running with Beto comes close to but side-steps the cult of personality surrounding the energetic candidate. It’s a minor look at strategy in an era where strategy is actually broadcast as part of the process, usually on Facebook Live, sometimes at odd morning hours. The sausage-making of campaigning is only briefly on display as we spend time with Beto staffers whom, as all bosses under pressure, do get mad at on occasion for dropping the ball.

Beto’s race of course captured national attention–and, yes, some national small donors–as he aimed to unseat Ted Cruz who very few people outside of his immediate family would call likable. Cruz has demographics on this side and Running With Beto chronicles this nearly winning campaign which expanded voter rolls as well as aimed to flip Cruz voters.

Directed by David Modigliani, Running with Beto offers immediate access to a man who is not without scandals, owning his punk rock past including an arrest for DUI. The film grounds itself in the present which is perhaps where the energy needs to be as O’Rourke takes a role in mentoring young activists including those participating in March for Our Lives and other civil actions. The doc also dabbles in Beto’s viral controversy supporting the NFL players taking knee, in which he gave a skillful off-the-cuff four-minute answer.

Modigliani allows Beto and his passionate supporters to speak for themselves, including Shannon Gay, a tough-as-nails Texan who proudly makes her own signs for O’Rourke and partners Amanda and Ester who lead voter drives and walk door-to-door. For Gay, reproductive rights and supporting veterans with action rather than rhetoric is vital and the film captures the passion of those willing to do the hard grass roots work. The film isn’t an examination of other aspects of organizing giant events, town halls, and visits, and perhaps it is a lesser document for it.

Met with applause and some tears amongst supporters of O’Rourke when screened at SXSW, Running with Beto is an authentic portrait even if it is one that could be garnered from other sources including his appearances on Ellen DeGeneres and Steven Colbert’s shows. Like Marshall Curry’s excellent Street Fight–the documentary about Cory Booker’s first failed campaign for mayor of Newark–Running with Beto may one day be an essential documentary but it’s not quite a political origin story. It’s a shame the cameras start rolling when they do as one might wish to see more of Beto’s beginnings, with his stamina, ideas, and a hands-on management style amongst a small staff. Like Reed Lindsay’s superb big money in campaigns documentary Charlie vs. Goliath offered up, Running with Beto could benefit being a little more curious about the larger machine.

Running with Beto premiered at SXSW.