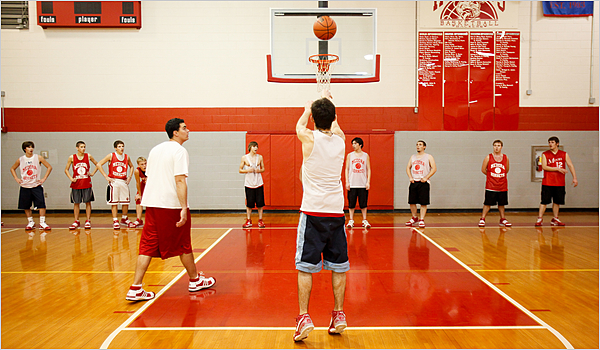 Medora is an especially powerful and perceptive film, telling a story all too familiar and perhaps all too real — this is what the shrinking middle and lower class looks like. Medora, Indiana is a town hit hard by the recession, the kind of place clinging to the basketball team in its local high school. With an enrollment around 75, as a numbers game it lacks the players to compete with the regional, unified high schools it plays.

An intimate and eye-opening documentary, this film is ripe for a larger discussion. This is what an eroding middle and lower class looks like, and there is at least one instance documented here that makes you want to bang your head against a wall (a kid is essentially left homeless because the housing authority won’t let him stay with his buddy’s family). The town is hanging on the hope of the high school, as one resident stays “if the high school leaves, the town will die.” The film transcends the feel-good underdog sports doc, as it’s not a metaphor providing hope and a positive image for the town. Filmmakers Andrew Cohn and Davy Rothbart have crafted an impressive first feature using engaging talking head interviews. It tells a timely and important story with raw immediacy, tracing the losing team, as basketball is a proxy for the greater story. Medora and small towns across America require careful study: they may be a thing of the past, consolidated into suburbs or erased entirely from the map.

The portraits of our subjects are more compelling off the court, especially the basketball players, many coming from broken homes, one boy scared to death of men (as his girlfriend’s dad describes him). The triumph here is a minor one, as Obama promises jobs and the team improves on its losing streak each year, the boys are left with few post-high school options: either the military, church or college.

The film shares the quality of a This American Life episode (not a surprise, considering Rothbart is perhaps known best as a contributor to the series), often tracing ordinary people facing extraordinary situations, told with an emotional authenticity traditional journalism doesn’t achieve. Medora’s story is a snapshot of the here and now, a painful wake-up call wrapped in a sports movie. But like many sports movies about self-discovery and collective identity, the game is a MacGuffin.