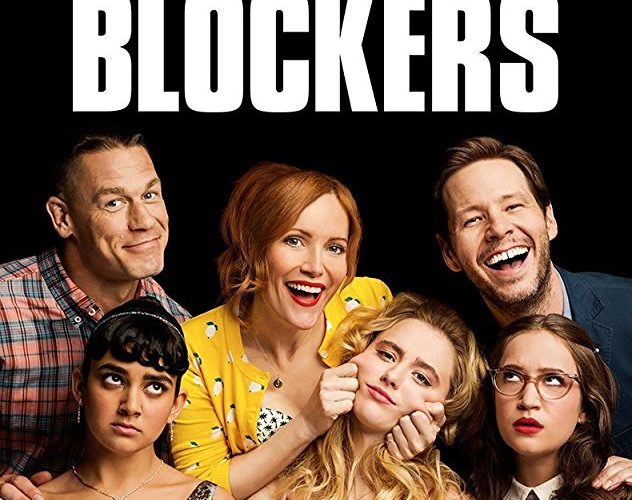 Blockers doesn’t pull off the impossible so much as it turns the tables on a common formula, finding something fresh, empowering, and hilarious in that time-old story of a group of friends making a pact to lose their V-card on prom night. Directed by Kay Cannon, there are a few more real-world complications for our leads, including Lisa (Leslie Mann), a single mother with an unhealthy obsession with her daughter; Mitchell (John Cena), a buff yet sensitive dad in a committed marriage; and Hunter (Ike Barinholtz), a party boy with surprising depth. This studio comedy even finds room for a tender (yet still very funny) coming out story to overbearing parents.

The girls are given their own agency as well. Lisa’s daughter Julie (Kathryn Newton) is dating Austin (Graham Phillips), a good guy with, as we discover in the film’s funniest scenes, an open relationship with his sexually adventurous parents. There’s the rebel Kayla (Geraldine Viswanathan) who dates a local artisan drug dealer, and Sam (Gideon Aldon), Mitchell’s daughter who is thrust into the virginity pact. Sam is slowly on the verge of coming out to her friends, finding herself more attracted to the mystical Angelica (Ramona Young) rather than her pudgy, top-hat adored date Chad (played hilariously by Jimmy Bellinger).

Through the magic of iMessage, Lisa, Mitchell, and Hunter catch on to the sex pact, rushing to put an end to it, first at prom and later in a raunchy scene featured prominently in the trailers. In fact, don’t let those by-the-numbers previews prevent one from seeking out a comedy that has more on its mind than most studio offerings. Directed by veteran screenwriter (30 Rock, Pitch Perfect) and first-time filmmaker Kay Cannon, Blockers is a high-energy sex comedy largely divorced from the male gaze, turning the genre on its head with more insight than usual. What can often feel revolutionary is the attention to details as Julie wants her first time to be perfect and insists on spreading flower petals (as she comments, “like in that romantic comedy American Beauty.”) Blockers, of course, contains all the usual raunch including butt-chugging and drug humor, along with first-rate physical comedy by Cena, Barinholtz, and Mann as they debate parenting styles and motivations. Lisa and Mitchell seem to have a hard time letting go while Hunter is committed to giving his daughter the time of her life, which includes saving her from having sex with Chad. Working from a script by Brian Kehoe and Jim Kehoe, Cannon avoids the usual trappings of a high school comedy that is divorced from reality, granting the high school girls at the center of the comedy their own space for healthy conversation akin to what American Pie achieved nearly two decades ago. The sex pact comedy subgenre has grown up and the future is female.

Blockers premiered at SXSW and opens on April 6.