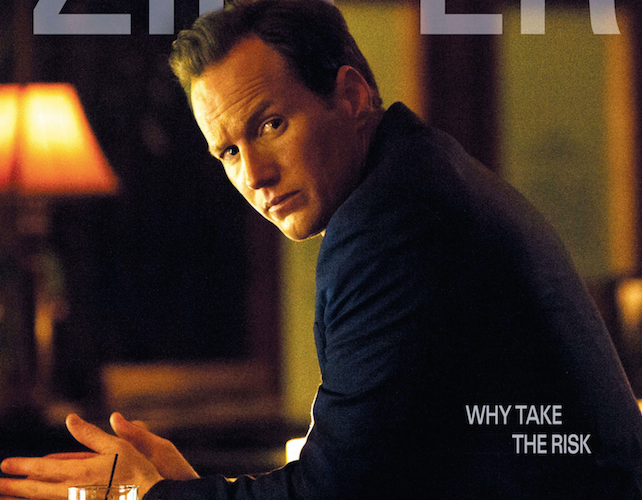 From top to toe, Mora Stephens‘ Zipper plays like one of those sections in certain House of Cards episodes that feel cheap and easy and trashy. For a minute or two it’s fun, before it quickly becomes laborious and grating. This movie is almost two hours long.

Patrick Wilson stars as Sam Ellis, a smart, handsome assistant DA in line for the soon-to-be-vacant Attorney General spot. Early on, he’s presented as a mostly-good guy, whose natural charm has gotten him far and almost gotten him into extra-marital trouble. Following a big win, a young intern flirts with Ellis, going so far as to plant a kiss on him. He lingers for a bit, but ultimately rejects the young woman’s advances. The lawyer goes home and masturbates to some Internet porn, then goes to bed next to his wife, played by Lena Headey. Unfortunately, all of this is the tip of the iceberg.

Tasked with de-briefing an escort involved in a case of identity theft, Ellis is introduced to a provocative service that promises whatever you desire. What starts as naughty Internet searches quickly buckles into scheduled appointments. Finally, in played-out bit of seduction that feels like it lasts several hours, Ellis gives in to his primal desires. For the rest of the film Stephens introduces shadow players, from a corrupt journalist (Ray Winstone) to a corrupt political advisor (Richard Dreyfuss), who amount to little more than nothing at all as a way to tease out a bigger corruption that never surfaces. This is little more than a soft-core fictionalization of Eliot Spitzer’s downfall, and it’s not very interesting. Wilson does his damnedest in a wholly unlikeable role, while Headey stands out as best she can, actually perking up in the final act with a scene or two that elevate her character from “wife” to “manipulative wife with her own agenda.” It’s not much, but it’s something.

As the escort service crumbles under and F.B.I. investigation, Ellis races against the clock to clear his name while the public waits for him to announce his candidacy for Attorney General. While the parallel of these two lives certainly intrigue, so little is done to flesh out this man that we’re left wondering why any of this matters. Ellis is a bad man with bad habits who lacks the intelligence or resolve to say enough is enough. This is a cynical time for American politics, and Zipper feels like the cynical kind of movie we deserve. That doesn’t mean we have to like it.