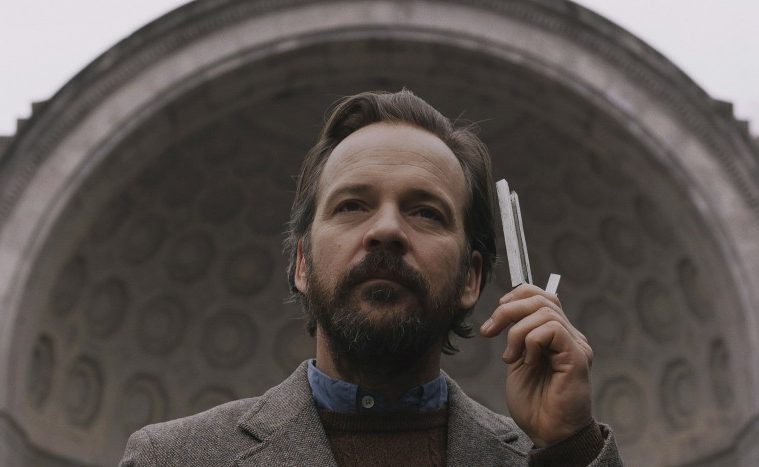 Sundance Review: ‘The Sound of Silence’ Has a Compelling Hook, But Plays a Monotonous Key

What if our happiness wasn’t solely predicated on our fruitful relationships, career success, or spiritual fulfillment, but rather the sounds around us? It’s this idea that drives music theorist and self-proclaimed house tuner Peter (Peter Sarsgaard) to the point of maddening obsession in The Sound of Silence. The directorial debut of Michael Tyburski has a compelling hook as we go on this journey of aural perfection, but the follow-through leaves something to be desired. In terms of its thematic predecessors, The Conversation and Blow Out set an impossibly high bar, but even the narrative propulsion of those classics is lacking here as the story plays out in roughly the same monotone key.

In a role tailor-made for Sarsgaard, he is at his most eccentric and determined, going house to house to see if your B-flat noise in the radiator is clashing with the E major of our toaster and the G noise emanating from your refrigerator. His meticulous process involves making the slightest of adjustments to appease one’s equilibrium. Peter’s philosophy is that one has a relationship with their home as if it was another partner and nearly all of one’s distress can be boiled down to this relationship being in a bad condition. Through going all over Manhattan, Peter has been working towards his bigger project of mapping the shared tone of each neighborhood, which approves his accuracy at solving the problems of his clients.

Living a life of solitary obsession, Peter ever so slightly opens up when he meets his new client Ellen (Rashida Jones), who is constantly in a state of exhaustion and she believes it might have to do with the soundscape of her apartment. As he awkwardly sits on her bed and asks her with a solemn sincerity if she’s a side sleeper, the off-kilter humor of his dedication is on full display. Not since Phantom Thread‘s Reynolds Woock has a film captured a character with such an amusing level of utter fixation on his life’s work. He’s the kind of guy who senses a disturbance in his apartment and so he walks up flights of stairs to his roof to shut a door that was left ajar to fix the problem.

After an intriguing initial act, The Sound of Silence unfortunately never matches the same level of intrigue and humor. Tyburski touches on a number of potentially compelling threads, each of which feels like he is skimming the surface of a more interesting subplot ready to dive into. Peter invented a useful tool many years ago that corporations have utilized for mass consumption, but he’s never been interested in this capitalistic route. He sees himself as an explorer in the field, not a marketer, as one colleague observes. When a company ready to take his methods to the population at large offers him a job, he declines, defiantly sticking to his values. As for his mutual affectation with Ellen, it doesn’t quite go anywhere satisfying, concluding on a moment stripped from another movie about an evolving technological landscape, Spike Jonze’s Her.

Despite lacking in a narrative pull, Tyburski’s works best as a ruminative city symphony and this particular case of loneliness in a metropolis full of noise. Mixed in Dolby Atmos, one should expect a film so concerned with the auditory experience to have top-notch production in this regard, and The Sound of Silence delivers. Whether it is Peter’s use of noise-canceling headphones or the layers of the commotion he’s confronted with on the busy streets, every reverberation is felt. Though being put in his headspace as if he’s contracted an illness any time he encounters an unpleasant noise, the film begs the question: why not move to a quiet cabin in the woods?

The Sound of Silence premiered at the Sundance Film Festival and opens on September 13.