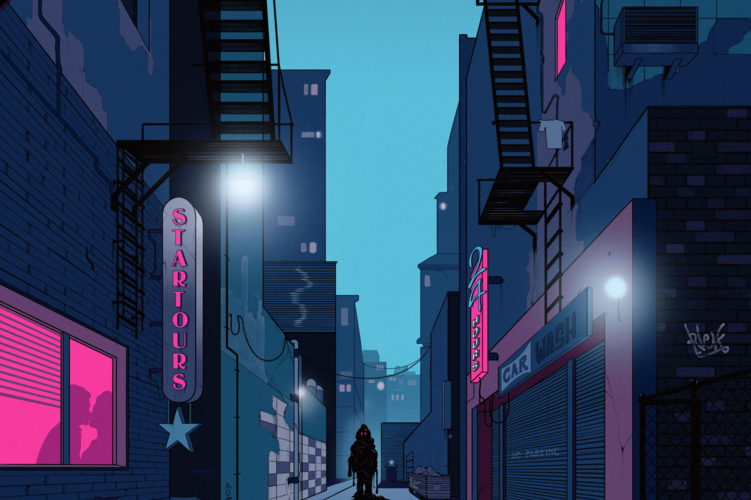 If a tree falls in the forest, does anyone hear it? By the same token, if a midnight movie premieres on VOD or screens at an empty AMC multiplex at 2PM, is it still a midnight movie? Is one required to be drunk, stoned, or half asleep to enjoy The Greasy Strangler? I’d say no, but being with the right audience and in the right state of mind certainly helps.

From its title you sort of know what you’re getting into and director Jim Hosking delivers the goods. Uproariously and often disturbingly funny, the concept, like Yoga Hosers, sounds like it was conceived at random. Hosking admitted the concept of a greasy strangler to be nearly impossible — how would he get a good grip? — yet he commits and continues to reinvent the wheel along the way until the picture stumbles late in its third act. For a midnight movie to go that long without running out of steam and testing the audience’s patience alone is a miracle. With measured performances that are so good they read as bad, the cast and crew along with co-writer Toby Harvard know exactly what they’re doing. Fearless, explicit and over the top, The Greasy Strangler doesn’t short change us in the “WTF” department, occasionally delivering tenderness in its father-son conflict.

Michael St. Michaels plays Big Ronnie, an aging disco enthusiast who leads a cheap, fake disco walking tour with son Brayden (Sky Elobar), pointing out landmarks like the convince store that Cool of Cool in the Gang worked at, in matching pink turtlenecks and short shorts. Along the way Brayden falls for Janet (Elizabeth De Razzo), a buxom women whom he develops some deep emotional feelings for. Big Ronnie is a state of disbelief and continues to call him a “bullshit artist” when he reveals his feelings.

Ronnie is obsessed with greasy foods to the point where he screams at Brayden for not cooking with enough oil and fat, all while insisting that he’s not the greasy strangler, a neighborhood killer covered in chicken fat. After lurking late at night, the strangler runs naked through a neighborhood car wash conveniently managed by a blind man. We learn Ronnie’s wife and Braden’s mother has left the guys for a physical fitness enthusiast named Ricky Prickles (Sal Koussa) who may or not be a monster; it depends upon if you trust Brayden, the only somewhat reliable voice in this whole endeavor. We do genuinely feel for him after Janet falls for Big Ronnie following a date at the disco, even though Brayden begs his father not to be a “smoothie.”

The Greasy Strangler is a risky enterprise and it largely works up until its third act. Then again, by that point, it may not have a choice where it goes. An Oedipal drama about two man-children living in a state of arrested development, the film delivers some big laughs even as its tests the audience’s boundaries, throwing in nudity, sex, and very fake-looking violence into the mix. If you go, enter in the right frame of mind, and be as prepared as you can legally for such an experience.

The Greasy Strangler premiered at the 2016 Sundance Film Festival and opens on October 7.