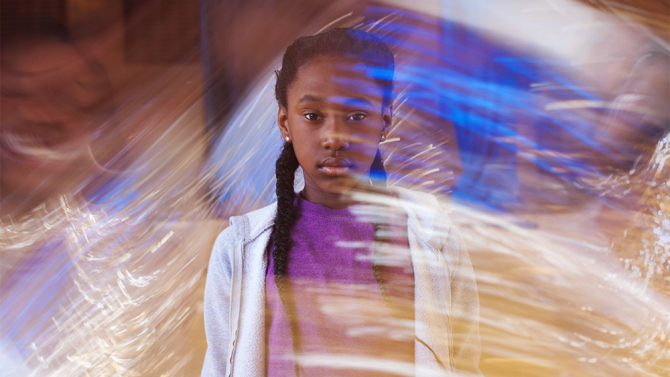 An exploration of movement, motion, liminality, childhood and racial politics, The Fits is a fascinating psychological study of Toni (fearlessly played by Royalty Hightower), an 11-year-old living in Cincinnati’s West End. Set almost entirely within the walls of the neighborhood Lincoln Rec Center, we first find Toni taking up boxing, trained by older brother Jermaine (Da’Sean Minor). Abandoning the rigor of the boxing — requiring sprints across an overpass after hitting the speed-bag — Toni finds herself drawn to the dance troop practicing across the hall, where what she finds is nothing short of her voice.

First-time filmmaker Anna Rose Holmer keeps an intimate distance from her subject, creating a restrained, nuanced portrait of childhood: equal parts social realism, ethnographic narrative and poetic character study. The film veers into body horror briefly when several young women from the troop start to have convulsions, a response its thought by the elders and the media to toxic water in the building. The dance troop comes very close to disbanding once two of the older girls fall ill to “the fits.”

Although conceived and screened well before the current Flint water crisis, the film undoubtably evokes the politics at play in this incident. Yet through restrained framing, keeping home life largely off-camera save for a few scenes, the film becomes a study of the institutions of childhood. These institutions here, largely work. Lensed by Paul Yee, his documentary background undoubtably has an influence as certain moments have the realism of a Frederick Wiseman institutional study. At times the inmates do run the institution, and Holmer watches as the kids of Lincoln run around the hallways creating a little chaos within a controlled environment.

The Fits edges towards certain genres, allowing would-be plot points to fall by the wayside, such as they do during childhood as the focus is squarely upon the perspective of Toni with adults largely kept off screen. The film finds joy in small moments, including new friendships as Toni grows apart from her brother and tomboy tendencies, befriending fellow dance troop member Beezy (Alexis Neblet).

Frequently defying characterization, in doing so, Holmer finds a subtle joy and the film achieves a kind of transcendence in its final moments. Working towards a kind of victory, the film savors the moment by confidently breaking the rules its set for itself. The Fits is a haunting psychological and philosophical portrait of childhood and socialization. Largely succeeding, the picture takes on a subject no less than the discovery of self: both the imagined and the real.

The Fits premiered at the Sundance Film Festival and opens on June 3.