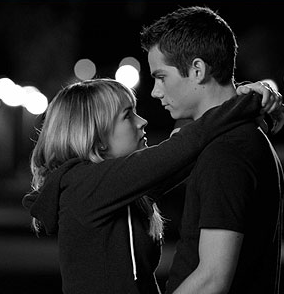 The First Time, written and directed by Jonathan Kasdan (In The Land Of Women),  is determined for its two leads, Aubrey (Britt Robertson) and Dave (Dylan O’Brien), to convince you they’re worth caring about.

Robertson is a young force to be reckoned with, playing the precious and super-duper coolness of her character down enough to appear equal parts mythical and believable. Unfortunately, O’Brien can’t keep up next to her performance. He never becomes much more than a handsome, constantly-concerned face. Employing the Before Sunrise model, Kasdan’s sophomore effort takes place over one L.A. weekend, opening at a Friday night house party. Here we are introduced to Dave as he recites his planned declaration of love to Jane (Victoria Justice). He’s interrupted by Aubrey, who quickly reveals herself to be the local Manic Pixie Dream Girl. The meet-cute that follows is overlong and a bit forced, punctuated by “likes” and “ums” from the two characters. And yet, in between the stilted lines and occasionally awkward filmmaking, we see a longing in Aubrey’s eyes and believe what she’s feeling more than what she’s saying.

This first scene is a microcosm in many ways, to the film as a whole. Underneath the inclusion of unnecessary pop songs, abrasively close close-ups and a lagging pace, The First Time gets to the core of pre-college angst.

Consider a moment in which Dave describes what the normal weekend is like: “We drive around looking for a party, hoping to find ‘ the girl.’ Then we there and don’t know anybody, so we leave and go looking for another party.” This kind of honesty is thankfully applied to the titular subject as well, both Kasdan and his leads going for it. Together, they capture the brutally real, awkward sequence of events that show the loss of virginity as it is, not as i’s dreamed to be.

This alone makes The First Time worth seeing for every teenager taking the proverbial “it” too lightly, or, too seriously.