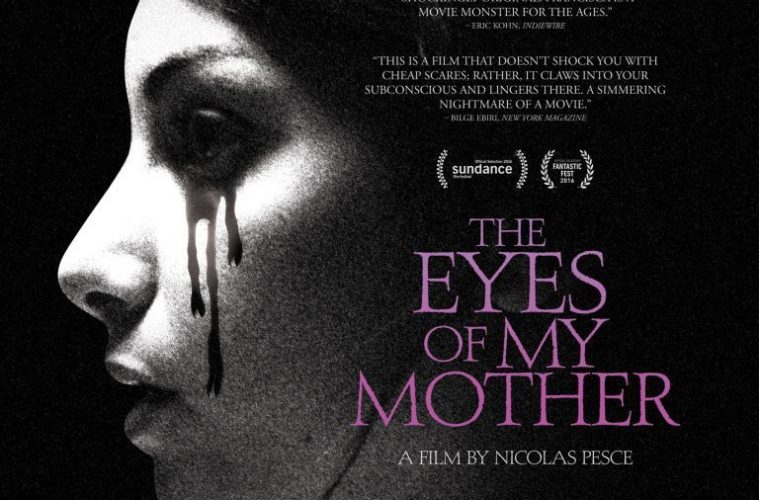 [Sundance Review] The Eyes of My Mother

Here is where I go off-book for my final Sundance review. The film is Nicolas Pesce‘s frightening The Eyes of My Mother, and I am not its target audience. This was not a pleasant experience for me. In fact, it took a lot to stay in the theater for the full 77-minute running time.

The plot concerns young Francisca (Olivia Bond), who watches her mother murdered at the hands of a psychopath and then becomes complicit with her father (Paul Nazak) in enacting a painful, tortuous amount of vengeance on the man responsible. Francisca, years later (Kika Magalhaes), has lost her father but still has the man, chained in the barn, and literally eating from the palm of her hand. Solitude serves as the fuel for Francisca’s own fractured psychosis, the film revealing itself to be an extended nightmare filmed in beautiful, disconcerting black-and-white by Zach Kuperstein. Magalhaes haunts as the driving force of madness here, a kind of rapturous tornado of terror. There’s not much dialogue, and not much need for it.

This film comes from Borderline Films, a production company that’s mastered the art of tortured souls in past Sundance fare like Martha Marcy May Marlene, Simon Killer and James White. The Eyes of My Mother is the bleakest of their films by some distance, and certainly the most unpleasant. In many ways, it plays less as a narrative feature and more like a terrifying thought you do your best to shake out of your head as quickly as possible. While this is clearly Pesce’s intention and the cosmetics are top-notch, the film never works as much more than a cinematic experiment solely focused on only the absolute worst inclinations of human nature. Many will respond to this positively, and it’s easy to see why. This film is so unabashedly, so unflinchingly evil that it is extremely impressive and extreme unlikeable.

On a personal level, I hated this picture with every fiber of my being. Rarely do I slip into the first-person for these reviews, but for this I make an exception. Hopefully, I will forget the memory of seeing this movie and feeling the way I felt while watching it. In a way, this is a testament to its power and, in another way, a recommendation for those looking for a wholly uncomfortable theater-going experience.

Ignore the letter grade at the bottom of this review and heed the words above. Pesce gave us a bad dream. I wanted to wake up the entire time.

The Eyes of My Mother premiered at the 2016 Sundance Film Festival and opens on December 2.