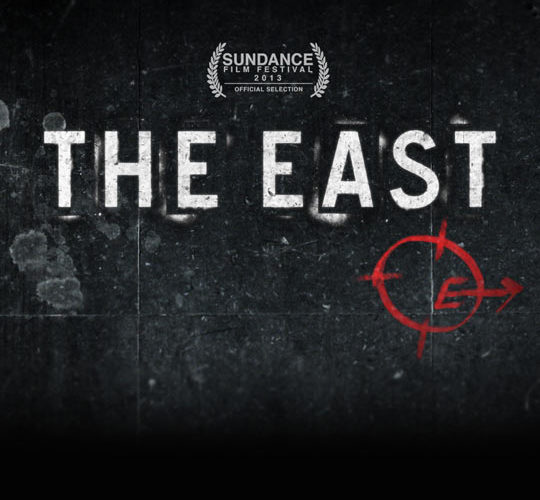 Serving as an engaging antithesis to last year’s Sound of My Voice (a cryptic piece of filmmaking that left a myriad of questions unanswered), Zal Batmanglij’s second feature The East leaves little left to the imagination. That sort of straightforward approach, while coherent and sensical, consistently hinders the film from excelling into anything more than a well-crafted and cogent thriller (which, admittedly, we’re in short supply of these days).

Immediately upon getting hired by a private intelligence firm, the young, highly-skilled, and determined Sarah Moss (Brit Marling) is hired to infiltrate an environmentally motivated anarchist group called “The East.” This reckless organization, led by Izzy (a cold and calculating Ellen Page) and Benji (a reserved and persuasive Alexander Skarsgard) serve a some sort of twisted public crusaders (hidden ones at that).

They’re goal is to takedown the CEO’s of big companies producing harmful products consumed by the general public. As Sarah continues working undercover she unintentionally (though understandably) forms friendships with members of the group. There’s even a small romantic thread between Sarah (a typically professional individual) and Benji. But no matter how many lives are spared at the cost of their mission, “The East” manages to find a way to justify their damaging actions. They prevent “eco-terrorism” pronounces the passionate group. Moreover, Sarah grows, against all rational thought, sympathetic to the organization’s violent means of providing justice.

Once again, Batmanglij and Marling prove to be quite the talented writing duo. After penning Batmanglij’s directorial debut, the intelligent team of two tackle pressing environmental issues (i.e. lucrative companies creating unsafe products for the sake of profit) without devolving into didacticism. Aside from the film’s candid cultural commentary, The East presents a morally and emotionally conflicted protagonist that forces the viewer to contemplate how they’d respond in her sticky situation. Contrary to Sound of My Voice (a much more deliberately paced and metaphysical film), The East flows with a sense of rapid fire urgency that keeps one on the edge of their seat. And yet, while Sarah’s ongoing struggle between her profession and her beliefs is a convincing one to watch unfold, this neo-noir hybrid misses the boat on evoking emotion.

Influenced by the deftly constructed films of Tony Gilroy (chiefly Michael Clayton), Batmanglij appears to far more concerned with telling a focused and grounded story — no matter how elementary and simplistic it is. However, despite The East suffering from the occasional dose of banality, the film is mostly rescued by Batmanglij’s taut screenplay and Marling’s dynamite leading performance.