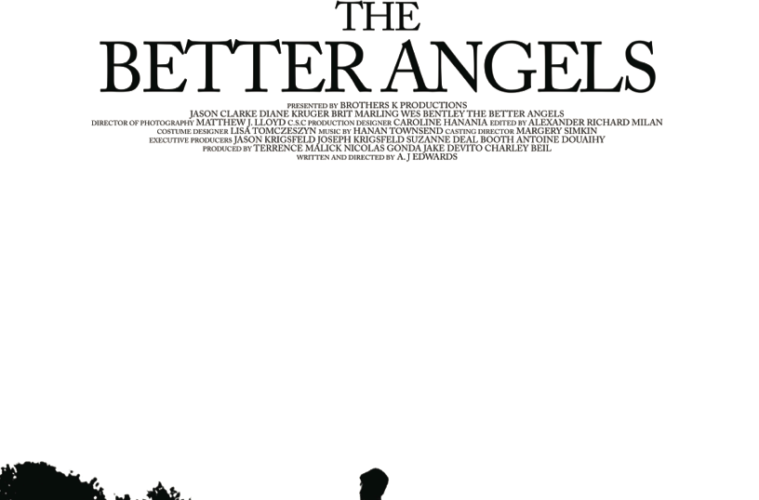 The style of Terrence Malick has long since been a comparison point in many critical examinations, as of late hitting something of a fever pitch. While I rarely find such claims to be of real merit, a new drama premiering at Sundance does more than proudly wear this style on its sleeve, instead using the auteur as a collaborator and key member of the creative process: The Better Angels, produced by Malick and directed by a To the Wonder editor, A.J. Edwards, makes for a sublime, transfixing, and informative look at the early life of Abraham Lincoln.

When beginning in Indiana circa 1817 — the film will span over a nearly three-year period from that point forward — we’re introduced to the spare farming life of our to-be President, played with a youthful spirit by Braydon Denney. Living in a modest cabin in the woods, we see the family — also made up of his cold, but authoritative father, Tom Lincoln (Jason Clarke), and loving mother, Nancy Lincoln (Brit Marling) — farm, chop wood, play in the forest, and eat. While his father clearly wants a son who will follow in his footsteps, the mother sees a more ambitious future. As a strikingly spiritual film, The Better Angels evinces an ability to mine the beauty of any situation, even death. When Marling’s character passes away, we see the last gasps of air, a figure walking through the doorway, exiting this life; we then peer up into the trees, above the earth, where the family prays her soul will now live. Lincoln’s father soon leaves his children and returns with a new wife, Sarah Lincoln (Diane Kruger), who also embodies a heavenly figure. She, often lit by rays of sunlight, tells her stepson that no matter his feelings towards her, she’ll love him unconditionally — a nurturing balanced by Clarke’s character, whose demanding actions are highly reminiscent of Brad Pitt and Hunter McCracken’s relationship in The Tree of Life. Although Tom Lincoln’s parenting approach is different, he sees the greatness in his son, saying, “You’ll be twice the man I am.”

While Edwards’s method is coming from a place rooted in visual storytelling — or what one would typically define as an approach of “visual storytelling,” broad as that may be — it’s an unmistakably informative film, with events (even those illustrated via voiceover) culled from a variety of historical documents. We see the Great Emancipator have a first encounter with slavery and receive the education that would come to form him — reading Robinson Crusoe, studying the states, and reading the Bible under the tutelage of Mr. Crawford (Wes Bentley). All of these formative moments — particularly the life lessons learned by his family — result in a remarkably complete portrait of his childhood.

Although he only serves as a producer, essentially every frame of The Better Angels feels as if it’s been touched by Malick; the idyllic voiceover, provided by the young Lincoln’s cousin, far outweighs any diegetic dialogue; the stunning cinematography of Matthew J. Lloyd, shot in black-and-white, is clearly inspired by Emmanuel Lubezki, with a constantly roaming camera often pointing toward the heavens; the editing from Alexander Richard Milan further pushes forward a memory-as-cinema aesthetic, culminating in a comprehensive, tender snapshot; the angelic score is provided by To the Wonder‘s Hanan Townshend, who will work on the upcoming Knight of Cups. It’s all there, and, while some might complain that Edwards hasn’t brought forth a unique directorial voice, after so many have tried, he’s the only director who’s been able to effectively follow in the footsteps of Malick, making for a worthy successor if ever we’ll have one.

The Better Angels premiered at Sundance Film Festival 2014. One can see our full coverage of the festival below.