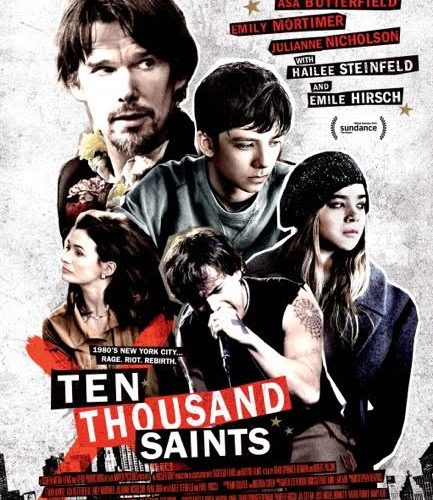 Working in the tried-and-true coming-of-age drama with a focus on sex, drugs and rock-n-roll, Ten Thousands Saints, from directors Robert Pulcini and Shari Springer Berman (American Splendor), is equal parts sensitive and overwrought, intelligent and preachy.

When we open in Vermont it’s 1980 and Les (Ethan Hawke) has just been kicked out by his wife Harriet (Julianne Nicholson). When their son Jude asks Les what happened, he’s told two things: Les got a neighbor pregnant and Jude is adopted. It’s a complicated moment that’s sad, touching and very funny. Ultimately, a good tonal springboard for what’s to come. Years later, Jude is a teenager played by Asa Butterfield, with dreams of punk rock New York. He meets Eliza (Hailee Steinfeld), the daughter of Les’ girlfriend (Emily Mortimer), who’s stopping by Vermont on her way back to New York. A fun night turns tragic when Jude’s best friend Teddy (Avan Jogia), after sleeping with Eliza, dies thanks to a bad combination of drugs. His death purges Jude from Vermont and puts him in a one-room East Village apartment with Les, minutes away from Teddy’s older brother Johnny (Emile Hirsch). Soon after Jude’s arrival to the Big Apple, we learn that young Eliza is pregnant with Teddy’s baby.

There’s a lot that happens in Ten Thousand Saints. The film is engineered to cover any and all cultural bases that relate to New York in the late ‘80s. Eliza’s mom is a rich yuppy, Les is a slumming drug dealer, Johnny is a straight-edge rocker and Jude and Eliza are stuck in the middle. It’s a convenient set-up that allows for a large dollop of melodrama, and Pulcini/Berman show a strong hand in addressing the viewpoints of each character, rarely judging them for their actions. For every moment that feels overtly draped in nostalgia (one too many direct notices to the gentrification to come), there’s another moment that feels authentic to growing up in this specific kind of urban chaos. Hawke coasts in the dead-beat dad role, playing comic relief with noticeable ease, while Butterfield and Hirsch do fine work as boys doing their best to be men. All of that said, the real stars here are the women. Steinfeld shines in a role that very clearly announces her transition from talented youngster to leading lady. As we watch Eliza do her best to navigate her situation, her struggle not to make the right decision, but rather to make any decision becomes clear. Nicholson and Mortimer – both wonderful here – drive this point home in a scene they share towards the end of the film, in which they bond over the trials of raising another human and the mistakes that will ultimately form that person.

It’s a very honest conceit in a movie that’s sometimes a bit too concerned with capturing a very specific time and place. The core of the film is universal, regardless of its setting.

Ten Thousand Saints premiered at Sundance Film Festival and will be released on August 14th.