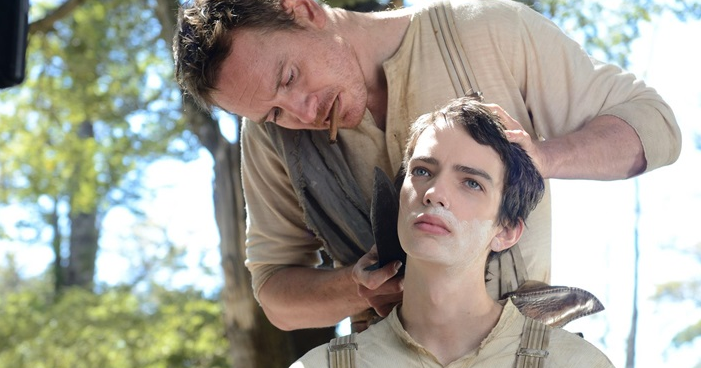 The treacherous landscape of the west has been captured in numerous entries in the genre, but rarely with the distinctive vibrancy cinematographer Robbie Ryan (Fish Tank) brings to it in Slow West. John Maclean — who has had a long relationship with his star Michael Fassbender in a handful of shorter form projects — makes his directorial debut here, clearly reveling in providing his twist on the genre, while still holding true to its roots.

The film begins as any should: before any images, the voice of Michael Fassbender introduces the story, featuring a Scottish teenager Jay Cavendish (Kodi Smit-McPhee) determined to traverse across the West in order to return to his past lover. Filled with dangerous men (chief among them Ben Mendelsohn and his gang of outlaws) to prevent this reunion from happening, Cavendish and Silas Selleck (Fassbender) meet at an opportune time. Striking up an agreement, they head out into the unknown terrain, which soon becomes more perilous as Silas learns there’s a $2,000 bounty on Jay’s desired partner, Rose (Caren Pistorius) and her sole remaining family member, her father John (Rory McCann). As the title suggests, there’s a slow burn leading up to the climax — which features one of the most well-executed, clever, and even humorous shoot-outs in recent memory. The build-up is less successful, attempting to tie in Jay’s backstory with unwieldy and ultimately unnecessary flashbacks. In a stoic, but underwritten supporting role, Fassbender portrays the essential cowboy, even if one wishes there was a bit more meat to his character, and the rest of the ensemble for that matter. A brief hint at a past relationship between Fassbender’s Silas and Mendelsohn’s Payne could’ve done wonders if expanded, but Maclean unfortunately keeps characterization at a minimum.

Shot in New Zealand, there’s a surreal beauty to the environment, particularly in the exquisite symmetrical framing and bright palette Ryan provides. Cowboy boot heels are given as much stature as the breathtaking vistas in their picturesque frames. There’s also the John Ford-inspired, centered compositions of characters, while an exceptional visual device is employed to show the violent path left behind.

The inevitability of violence, as in most westerns, commands one’s attention here. The way Maclean handles the sudden bursts of gunfire or a bow-and-arrow shot out of nowhere range from effectively unembellished to farcical, but it’s in these singular ways that sets the film apart from the spare westerns we’re given. It may skimp on its characters, but with a mostly successful amalgamation of various tones, Slow West is a beautiful and bold shot in the arm for the genre.

Slow West premiered at Sundance Film Festival and will be released by A24.