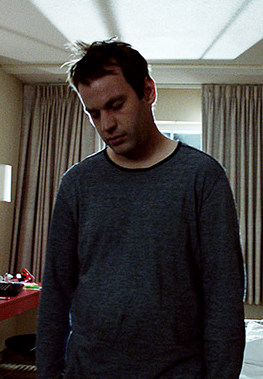 [Sundance Review] Sleepwalk With Me

Sleepwalk With Me, written and directed by Mike Birbiglia, is the manifestation of a stand-up routine in feature film form. Think an episode of Louie, only 90 minutes and featuring subject matter not quite as dark. This is because Birbiglia, who also stars here as a ficitional version of himself, and his stand-up material are not quite as dark.

The film opens with Matt Pandamiglio (Birbiglia) talking directly at the audience from the driver’s seat of his car. He begins to narrate his own story, about a young man trying to make it in the New York City stand-up comedy world, and the 8-year relationship he begins to compromise to succeed. What evolves should be required viewing for any young person convinced they want to pursue a career in the arts. It’ll be this hard, probably even harder. Throughout there’s Birbiglia, telling his story his way, more funny than sad, but undeniably true and heartfelt. Pandamiglio’s girlfriend Abby, played by Lauren Ambrose, is one of the most well-rounded girlfriends portrayed on film in quite a while. She never becomes the stock character we fear she’ll be. Ambrose, who you know from Six Feet Under, plays up both Abby’s independent streak and inherent kindness enough to show the viewers what both Matt and Abby already know: they should not still be together.

But instead, they begin to plan a marriage, following one of the more awkward and brutal “marriage proposals” in some time. If comedians dissect their real-life problems on stage in front of God and everyone, then this is Birbiglia’s symphony. This film follows a book and one-man stage show of the same name, literally calling “action” to events in the man’s life that are almost hard to believe. While Pandamiglio drives around the country doing stand-up for empty college auditoriums and bars past midnight for less money than it costs to get there, he struggles with a severe sleepwalking problem. A problem that gets more and more severe. The sleepwalking follows his depreciating relationship and slowly-blossoming yet unforgiving stand-up career with equal measure, promising a climax that will finally lead to some decisions getting made.

Carol Kane and James Rebhorn shine as Matt’s parents, featuring one especially smart recurring joke in which Linda (Kane) always abruptly continues a finishing discussion with “and one more thing…,” that thing being completely off-topic.

On a technical level, the film never looks like much more than a long episode of television, thanks to generally wide framing and mile-a-minute pacing. All of the eloquence is in the writing and Birbiglia’s telling of events. Just as things are about to get particularly gritty in the story of his life, Birbiglia looks to his audience and reminds them, “Before I tell you this next part, remember, you’re on my side.”

And we always will be, as long as he keeps telling stories like this.