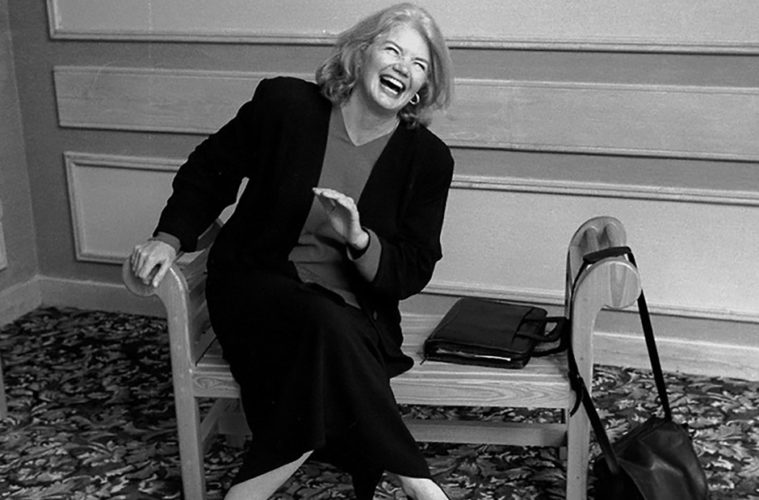 Sundance Review: ‘Raise Hell: The Life & Times of Molly Ivins’ is a Hilarious Ode to a Tough Texas Woman

Often hilarious and always a delight, Raise Hell: The Life & Times of Molly Ivins is the conversational, down-home story of the Smith College-educated Texan who found herself bouncing around the country to find her voice. When she landed at the New York Times in the late 70s after a stint at the Texas Observer her colorful language became too much for the conservative editors of The Gray Lady. She found herself running the paper’s one-woman Rocky Mountain bureau, concluding that the best job at the Times is one away from New York City.

A Texan at heart, she found herself in Dallas where she was given a broad mandate at the Dallas Times Herald, penning several books and later becoming an unintentional expert of the Bush family dynasty. Standing over six-feet tall with a wide frame, Ivins proclaims herself, despite her left-leaning politics, as a proud gun-loving, beer-drinking Texan who aimed to hold a mirror to a multicultural state, which we’re told is more American than America; equal parts black, Hispanic, southern, suburban, freak, and shit-kicker. Ivins remained fascinated by the tensions at all levels and especially in the tensions that play out in the Capitol building in Austin. She early on calls the state a laboratory for bad governance, stating “Texas public policy is like Hungarian wine, it doesn’t travel well.” And the film suggests that these flaws have been exported on a national level.

Raise Hell, directed by Janice Engel, blends witty interviews with and talks given by the late Ivins along with interviews by family friends and admirers like Cecile Richards, Dan Rather, and Rachel Maddow who flesh out what is remarkable about Ivins: her love of Texas, her willingness to take powerful targets, and her endless straight talk. She finds herself both on the inside and outside, battling alcoholism but willing to socialize with state legislators at the bar.

The film is an entertaining, loving portrait of Ivins who was a woman that was not without specific flaws, from the comic activities of bringing her dog and her own six pack to a job interview at Austin’s The Texas Observer to her unwillingness to comprise in New York. She finds herself making enemies of certain allies along with away. She remained friends with iconic Texas governor Ann Richards; hilarious footage is shown of a roast that might have been one hell of a night. Former employer Ronnie Dugger of The Texas Observer found discomfort in how she attacked specific targets in the legislation threatening the good ol’ boys club, while Ben Barns former Lt. Governor of the state found her too funny to hold a grudge for very long.

Battling the sexism of the time both overt and in the newsroom, she escaped the home, garden, and fashion beat thanks to her Columbia University masters degree. Ivins and friend Ann Richards were unafraid to give it right back to the lawmakers both in person and over dinner as told in archive footage that inspires some of the film’s biggest laughs.

Raise Hell: The Life & Times of Molly Ivins is a funny portrait of a quick-witted satirist who called it as it was, unafraid to be a little mean to the narcissists who were just glad to see their name in print. Tracing her life and career from her early years at Smith as she fades from a lively firebrand to her battle with breast cancer, Engel has directed a comprehensive and hugely documentary with a rapid-fire pace. Like Ivins, there is nary a moment when the film isn’t colorfully documenting the generation of tough-as-nails Texas women who took on status quo and even, in the case of Ann Richards, briefly won over Texas’ “Bubba” vote. It was an exciting era to be a progressive, or so this film makes it seem.

Raise Hell: The Life & Times of Molly Ivins premiered at the Sundance Film Festival and opens on August 30.