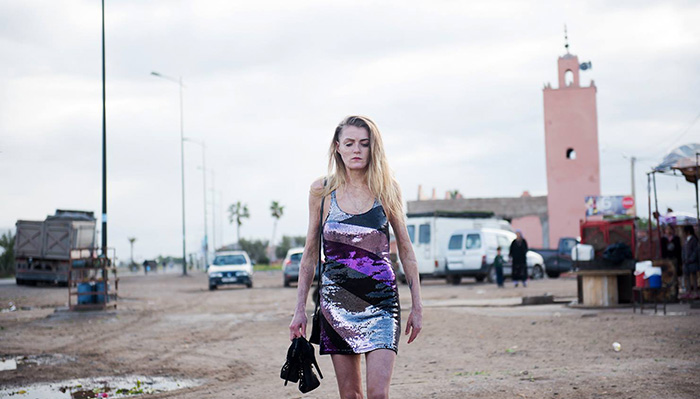 Sundance Review: ‘Dirty God’ Shows the Aftermath of a Nightmare

How do you cope after an attack that leaves you visibly scarred for the rest of your life? This is the difficult question that director Sacha Polak looks to delve into with Dirty God. Alongside co-writer Susie Farrell, they craft a scenario wherein the victim of such horror is a pretty young woman in South London who’s done nothing to deserve a fate she cannot outrun. She can’t even isolate herself with friends and family until ready for public re-assimilation since there’s a toddler involved whose first word upon seeing her mother in the hospital was “monster.” Pair that with baby Rae’s (Eliza Brady-Girard) incessant crying due to a newfound unfamiliarity after returning home and you’ll begin to understand the arduous period of readjustment Jade (Vicky Knight) faces.

This isn’t some posh princess, though. Jade’s mother (Katherine Kelly’s Lisa) makes a living stealing clothing and accessories from high-end shops; her best friend (Rebecca Stone’s Shami) is ready to take her clubbing as soon as she’s out of the hospital; and she’s not afraid to throw down with any chump who deserves it from disrespect. That last one goes for Rae’s grandmother (her ex-boyfriend and assailant’s mother) too. It takes a deluded piece of work to think you’d be welcome to even look at a helpless baby let alone hold her after what this woman’s son did to Jade. Talk about a trigger warning after so many surgeries and rehabilitation sessions. Just days away from a trial and this woman swings by like its no big deal.

That’s just one of many excruciatingly rough details within Jade’s new life. Suddenly everything brings with it a memory of what happened whether it’s the potential love interest (Bluey Robinson’s Naz) that could have saved her all this pain (now romantically involved with Shami) or the once fun atmosphere of a pulse-pounding club wherein her mind can’t stop from seeing her ex approaching through the crowd. She tries cyber-sex dating sites, a telemarketing job, and even the questionable act of cultural appropriation via wearing a burqa — but it all just augments the fact that she’s no longer comfortable being herself. So she latches onto the hope that more plastic surgery is still an option whether in London or on the cheap in Morocco. Her psychological headspace is unfathomable.

Knight is a first-time actor and yet she embodies this role with an authenticity that goes beyond mere performance. She too is a burn victim with facial and body scars. She knows exactly what it’s like to cope with circumstances both in and out of her control. The quiet rage seething within when an idiot co-worker makes a jab is palpable because she’s surely had to deal with similar mean-spirited ignorance herself. But there’s also Jade’s selfish drive to brush it off when desperate to fulfill her wish for another skin graft. No matter how good it might feel to punch that dude in the face, this is a job where she isn’t forced to be as self-conscious as others might. Sometimes anger can become our best motivation. What about the baby, though? What about her mother constantly glossing over her wishes when it comes to letting Rae see members of her father’s family? What about Naz’s perpetual smile and closeness — the kind that’s able to wash the stigma of how she looks away until Shami arrives to break the trance of what might have been? There’s the push and pull of those who love her doing what they can to make her feel normal and at the same time drawing focus to the fact that she isn’t in the process. It’s that fine line between being blind to what happened and pretending that it didn’t. Jade knows the difference and sometimes that pandering hurts more than some nobody she’ll never see again hurling an insult.

This is where Polak really gets at the nuance of the situation. She’s not afraid to introduce new characters like Dana Marineci’s Flavia to truly treat Jade like anyone else at their crappy job. Where Shami is prone to bend over backwards, Flavia won’t. There’s no special treatment and thus no expectations like the sort Shami is always letting come up short. Polak is also willing to let the complex feelings between Jade and Naz play out in ways that aren’t mired in external details. The two acting on their lust is absolutely wrong considering present relationship dynamics, but there’s power in letting them do it anyway. Dirty God isn’t some contrived pity project tugging on heartstrings. Polak is legitimately engaging with the aftermath of a real-life nightmare.

So things can get difficult to watch at times. Jade will make mistakes before letting her stubbornness exacerbate them further and Rae will sometimes be used as a pawn. There’s also the mixture of terror and allure in dream with her ex supplying the love she believed they shared before becoming the jailbird monster that derailed everything. A sense of futility is never far behind any event that occurs and yet Jade refuses to let it control her no matter how impossible the future may seem. Neglected babies and self-inflicted wounds will make you cringe, but Polak isn’t interested in their depictions as evidence of squalor. They’re instead the consequences of PTSD-fueled rage. Sometimes remorse can’t come fast enough to excuse actions, but it’s there nonetheless.

That tough area of inexcusable deeds having the room to be excused is where the film really excels. The stuff about what it means to be beautiful inside and out is effective, but so much of that goes hand-in-hand with the trauma too. After all, how much do the reactions of strangers towards Jade alter her perception of herself? It’s incalculable. Before she can even think to brush off the hatefulness of outsiders, she must first deal with the disgust she feels for herself. She must recognize that neither she nor God is to blame for what happened. That’s her ex’s burden to bear all his own. The truth she must confront is whether her scars make her less of a mother, daughter, friend, or lover. Will those scars define her or will she define them?