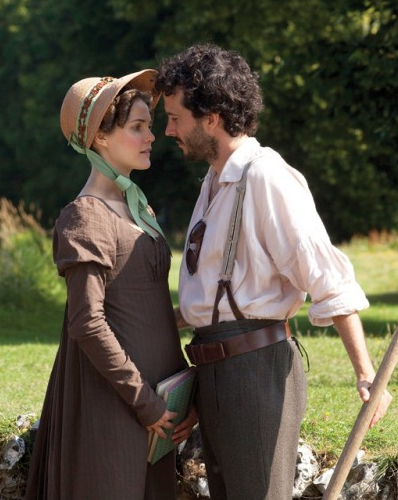 Few works stand the test of time like those from English novelist Jane Austen. A rooted staple in our culture, her elegant romantic dramas have set a precedent in the centuries following, leading directly into the cinematic world with many adaptations, including a film from Joe Wright and even a planned take on Seth Grahame-Smith‘s zombie-infused novel. Premiering at Sundance Film Festival, Jerusha Hess‘ Austenland, the latest project featuring the renowned author’s namesake, provides a modern-day twist, yet is sorely absent of the timeless characteristics that make up Austen’s 19th century classics.

Jane Hayes (Keri Russell) is a 30-something who has hit a romantic roadblock, partially due to her undying love for Jane Austen, specifically her seminal Pride and Prejudice and even more explicitly, the romantic icon known as Mr. Darcy. With a full-size cut-out of the character as portrayed by Colin Firth and other memorabilia filling every corner of her room, her obsession has hit a breaking point and Hayes’ best friend attempts to put an end to the madness by instilling a bet. For her dream vacation, Hayes eyes a getaway at the titular Austenland, a one-of-a-kind experience promising to recreate the romantic fantasies found in Pride and Prejudice. If these said fantasies match up to the actual events, then Hayes is free to go on living an Austen-obsessed life, but if it doesn’t turn out to be the case, then she must finally — for the first time since a teenager — do away with this infatuation. Jetting off to London, she is greeted with a carriage ride from the family servant Martin (Bret McKenzie) as her adventure begins.

Starting off on a promising note, the initial handful of scenes provide the offbeat comedy one might expect from the writer who brought us Napoleon Dynamite, including some hilarious dry exchanges with minor character in Hayes’ life. But it isn’t long until the predictable nature of the plot kicks in, as Hayes meets the other women on the English estate, including the beguiling “Lady Amelia Hartwright” (Georgia King) and Jennifer Coolidge‘s “Elizabeth Charming,” an aloof American who continually attempts (and fails) at a period British accent, a joke that wears thin by its fourth occurrence. As for a possible suitor, although Henry Nobley (JJ Feild) is set up in the Mr. Darcy role, it’s apparent from his first few scenes that it is McKenzie’s character that will become the focus, including any implications that may follow. While Hess attempts to play with the idea of theatrics vs. genuine love, as the emotional line between Mrs. Wattlesbrook’s (Jane Seymour) hired actors and her clients becomes blurred, its never sold in a convincing manner. Despite Russell’s sturdy lead performance, the rest of the ensemble are nothing more than one-note pawns, making any emotional investment unattainable.

While the production design is top-notch, Hess’ captures this ornate world with unremarkably flat direction. Her cookie-cutter approach rarely causes a moment of tension and as our characters becoming increasingly ambiguous about whether they are acting or showing their true colors, we are continually pulled out of what is clearly attempting to be a story in the mold of an Austen classic. Cloying and repetitive with the end results foreseeable from the start, and little engagement throughout, one is better off curling up with any Jane Austen novel then taking a trivial trip to Austenland.