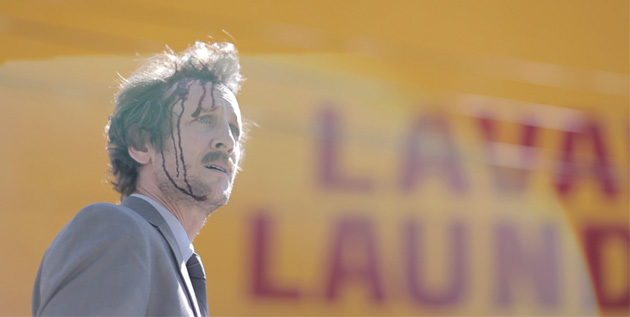 [Sundance Interview] Director Quentin Dupieux on the Logic of ‘Wrong’

One of the films that jumped out at me last year was musician/filmmaker Quentin Dupieux’s oddball tire slasher flick Rubber. This year the feisty Frenchman has returned to Sundance with a new bizarro tale that continues to define his unique off-kilter style. Wrong is the story of man who loses a dog, but the world Dupieux creates is full of absurd symbolism and metaphors while being funny and at times heartfelt. I was lucky enough to sit down with the filmmaker and discus the inspiration behind some of his concepts, how he directs actors and how his love for movies led to his success in music. Check out the interview below and our review here.

The Film Stage: What inspires your unique blend of cinema? Where do you get your inspiration? Where do your ideas come from?

Quentin Dupieux: From nowhere. Ideas just come. You know what I mean? I’m just seeing everyday life from a different angle. For example, to me, real-life stuff – what we see everyday around us – is, to me, a little absurd. I’m trying to talk about my perception of real life, because to me there are a lot of things in this world that don’t make any sense. So I’m not trying to get away from this world, I’m just trying to talk about it as I see it. Does the randomness in some of your scenes have specific meanings to you, or do you want it to be abstract and let people interpret it for their own?

I like to let the viewer make his or her own movie. I really like this approach. But to me, the script has a perfect logic. It’s not random. I work following a few rules. It’s hard to describe these rules because they’re just there inside me. But it’s definitely not random. I know there’s some kind of strong logic in my writing, but I don’t know how and why. It’s just there.

But do you still want it sometimes to be open for the audience to interpret?

Oh yes, all the time. All the time. There are many ways to watch this movie. You can just stay on the light level, the first level. You can just enjoy the absurdity and the funny beats and the strange dialogue. You can just watch it like this, and that’s also a good way to watch it. I’m not expecting anyone to understand everything. Basically what I’m trying to do is put the viewer in a weird situation, because usually when you watch a movie, you’re guided – they tell you what you’re supposed to feel. “This is the sad moment, this is the strange moment, this is the creepy moment, and this is the funny moment.” What I’m trying to do is let the audience feel their own stuff. I’m just asking the audience to work a little bit, but not with the brain. It’s not like a complicated approach where you have to understand something. I’m not interesting in doing this. I’m just interested in making the audience feel something different. I quite like the idea of everybody feeling different.

It’s amazing that you shoot, edit, direct, and write – you do everything. So what was the most challenging scene for you to film during Wrong?

Basically, for stupid technical reasons – I mean, not [exactly] technical – the dog scene at the end. Suddenly we had to deal with something complicated – the dog jumping out of a bus, which looks okay on screen but was a pain in the ass to shoot, because it’s a dog, and even if he’s a movie dog, suddenly you can’t do exactly what you want. So that was the only difficult beat during the shoot. Otherwise, everything has been really, really smooth and the actors were great – totally into it. Basically it was just me talking to the actors and then as soon as the camera was rolling, it was perfect.

It has been quite easy because there were smart actors totally into the script. So, yes, that was the only beat, which sounds ridiculous because it’s quite a short scene – I think it’s like five shots – but, you know, dealing with the dog and that was [quite difficult]. And that was a very important scene. When I shot it I was pretty sure I needed to do it again because, to me, it was a nightmare. I’m so used to shooting something and have it directly [where] it’s already perfect and you can watch the footage and it’s already good. Doing this, I was like, “Eh, maybe we should do it again,” and then I tried to edit the scene and it was perfect. Did you always want to make movies? How is making movies different than when you were making music?

Actually, I started by shooting short films. Yeah, I did that until I was like 15. I was playing with video cameras and I was really, really into it. And then I did music, because I needed music for my short films. The funny thing is that I had success first with the music. I mean, not really, because the Levi’s commercial I had directed [brought some success]. But people back in the days were not really aware that I did everything – the music and the commercials. So, let’s say I had success in the music, which was weird because I did this flat-beat tune in two hours. I mean, I still love music and I still make music almost every day. I love it and I’m going to put out a new record again. I’m still passionate about it. It’s just that making movies is more exciting because a lot of people are making music, a lot of records come out, and a movie is still something special.

What kind of direction do you give to your actors?

It honestly depends on the actor. I know what I want, I hear something in my mind, and it’s also hard to describe. So usually we try first, we shoot the scene and then I make some adjustments. But it’s really different – you know, it depends on the actor. For example, with Jack Plotnick, the lead, we had a lot of conversation during the shoot, we were trying a lot of stuff because he was the main character and almost all the time on screen. So we tried a lot of things, and he was very, very into it. He helped me a lot. We were suggesting stuff. It was fascinating working with him. Then, for example, working with Bill Fichtner [who plays Master Chang], he just came up with this idea of the accent and he just did it like this because he worked on it before. That was funny because when we shot the first scene with him, he just told me, “Hey, Quentin, do you like it?” I said, “Yeah, I love it. It’s crazy. It’s so weird.” He said, “Okay I’m glad, because I have nothing else.” [Laughs.] So I knew with Bill it’s going to be like this. And then with Eric, the French actor who plays Victor the gardener, it was also very different because we know each other so well and for him it was a great experience to act in English. So that was also different. We were having fun, I was driving him, he was suggesting stuff. With Alexis, the girl playing Emma, she needed to talk a lot and that was it. After ten minutes of conversation, she was [prepared for] the scene perfectly. And that’s it, it was perfect. And then we had to move on to another scene. So it’s different – it depends on the character. It’s always different. But it was exciting to work with every actor on this movie. They were all incredible and generous.

Yes, I will shoot fifteen minutes of it in [about] ten days. And then we’re going to put it online and then shoot the rest of it.