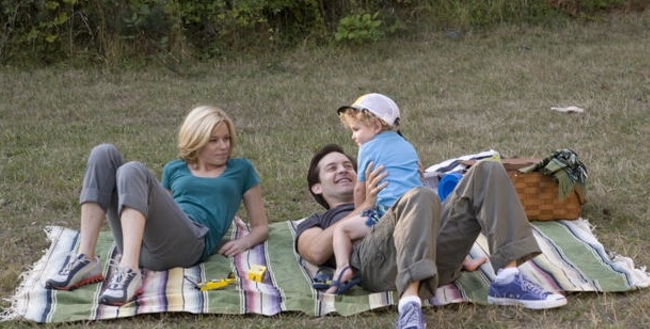 More Sundance wheeling and dealing: The Weinsteins have grabbed The Details, while Fox Searchlight picks up Another Earth and SPC have The Guard.

After a marathon bargaining session, Deadline reports that The Weinstein Company has acquired the Sundance dark comedy The Details, buying the domestic distribution rights for $7.5 million, with a P&A commitment of around $10 million.

This is the biggest deal from the festival reported so far, higher than the $6-$7 million the Weinsteins paid for the Paul Rudd comedy My Idiot Brother, though their P&A for that film is reported to approach $15 million.

Bob and Harvey are being their usual, aggressive deal-making selves this year, outbidding Summit Entertainment’s The Details offering by a good 2.5 mil. Will they take a bath on these acquisitions? Well, our own Raffi Asdourian gave The Details a “C” grade in his review, saying of writer-director Jacob Aaron Estes:

Estes, who is aiming to create an existential midlife crisis fairy tale, fails to make any correlation between the absurdist humor and the animalistic human nature of his characters.

Raffi calls it “too quirky for its own good.” This has been echoed by Deadline, who cites the lukewarm reception following its premiere. My Idiot Brother is another matter, since Paul Rudd has been a lucky charm for the past few years (I Love You Man, Dinner For Shmucks, his funny bit part as a stoned surfing instructor in Forgetting Sarah Marshall). The Weinstein Company probably has a lot more faith in My Idiot Brother‘s ability to turn a tidy profit, as evidenced by plunking down more cash for advertising. Check out Dan Mecca‘s favorable review of this one.

The Wrap brings us a report of Fox Searchlight’s fourth Sundance acquisition, picking up director Mark Cahill‘s debut feature Another Earth for an estimated $1.5-$2 million. Fox’s offering topped those by The Weinstein Company and Focus Features.

Another Earch is described thusly:

Star Brit Marling co-wrote the script, which follows an MIT student who kills a man’s family in a car accident. After serving a four-year prison sentence, she returns home anxious to meet the bereaved widower (William Mapother).

TFS’ Nick Newman also reports on The Guard getting picked up below:

One of the big hits of the 2011 Sundance Film Festival has been the guard, writer and director John Michael McDonagh’s dark comedy/thriller. Starring Brendan Gleeson and Don Cheadle with supporting turns by Liam Cunningham and Mark Strong, it’s gained considerable acclaim since its premiere, including from our own Raffi Asdourian. Sony Pictures Classics seems to have taken this into account, as THR tells us that they’ve just picked it up for domestic distribution.

The story of an Irish police officer (Brendan Gleeson) with unorthodox methods who’s paired with an uptight FBI agent (Don Cheadle) to investigate international drug smugglers, it’s a blend of dark comedy and more dramatic elements, almost like In Bruges. It’s been described as an “Irish Hot Fuzz”, and when I consider that movie’s status as one of my favorite comedies of the past ten years, along with the good cast assembled here, I get very excited. I can’t wait to see this, and along with SPC’s other acquisition Take Shelter, it’s the movie from this year’s Sundance that I’m looking forward to seeing the most.

What do you think of these Sundance deals? Which ones are most likely to make it to the multiplex?