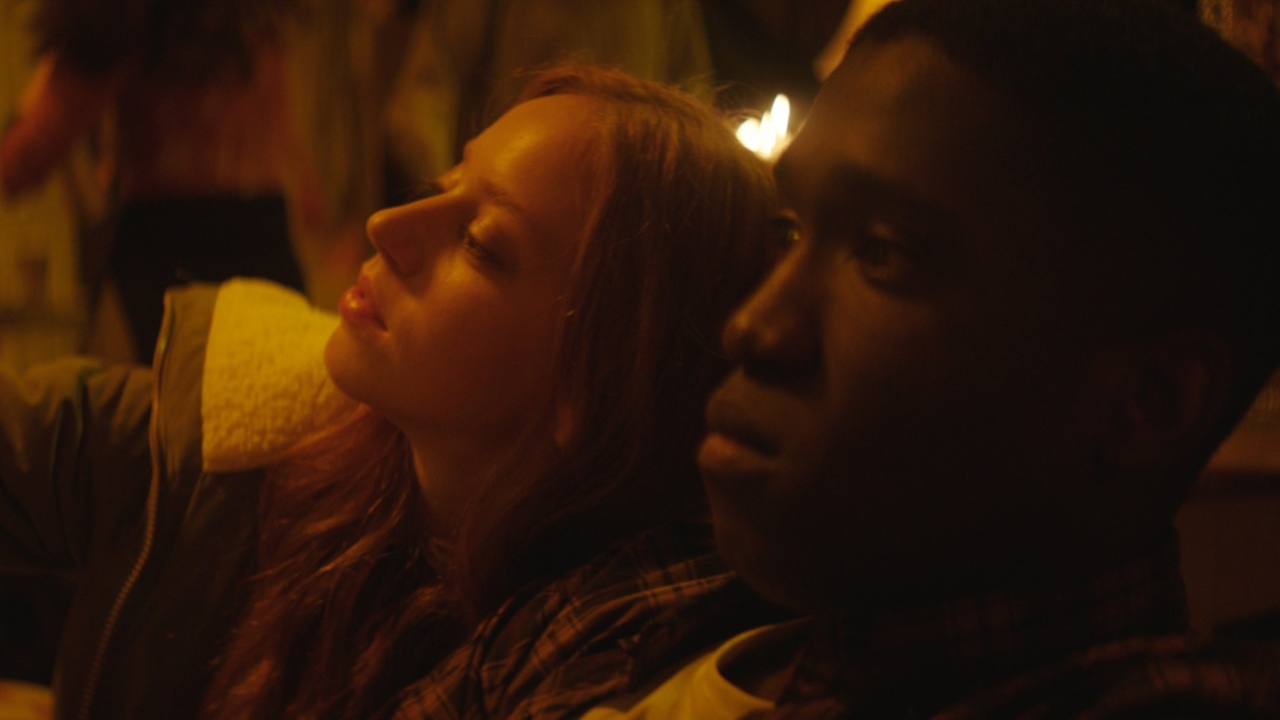 For their first feature, A Brixton Tale, filmmaking team Darragh Carey and Bertrand Desrochers set themselves a trap. It’s a film about filmmaking ethics—who gets to tell which stories, and where is the line between artistic expression and exploitation? By asking those questions, the Irish Carey and Québécois Desrochers put themselves under the microscope, too, in their depiction of a housing estate in rapidly gentrifying Brixton. They preempt those criticisms with a title card at the beginning that reads, “Made in collaboration with the community,” and yet I still can’t shake the feeling that A Brixton Tale is made with an outsider’s gaze––not because it’s exploitative, but because it’s generic. It’s a film that plays it too safe, sanding off the thorny edges of its characters to make something tiresomely morally straightforward.

The story is centered on a romance between Benji (Ola Orebiyi, also seen in Limbo), a Black Brixtoner, and Leah (Lily Newmark), a wealthy documentarian making a film about life on the Barrier Block housing estate, where Benji lives. The start of their courtship is positioned like a predator—Leah—stalking her prey. She shoots Benji and his friends from a distance, noticing him without introducing herself, and then watching back the footage, as if she’s picking out a target. Then, a few days later, she finds him again on the street and introduces herself by asking him to light her cigarette. Newmark is an interesting performer precisely because her expression is often so hard to read; that’s what made her so good at deadpan comedy in Sex Education, and compelling as a young woman still trying to figure herself out in Pin Cushion. Here, her ambiguous expression is interesting for a while, as we try to puzzle through whether Leah is manipulative or genuine in her affection for Benji.

Yet as the film goes on, it becomes clear that Carey and Desrochers don’t have much insight into Leah’s or Benji’s behaviour; I found it hard to care whether their romance was genuine or not, because it was so thinly drawn. Benji is straightforwardly sweet, and his affection for Leah is doggedly sincere—but for what reason? We’re given little idea what attracts Benji to the standoffish, shallow Leah, or what keeps him coming back to her after multiple betrayals. Is it just that she’s a pretty girl who gave him attention? Carey and Desrochers are careful not to exploit Benji with their camera in the same way that Leah does, but Benji’s one-note characterisation and muddled motivations make it clear that they’re more interested in the exploiter than the exploited.

And yet, Leah is also given curiously little narrative agency. She isn’t painted as a master manipulator or a misguided lovestruck young woman—instead she’s a puppet on a string. Scenes of her courtship with Benji are interspersed with meetings Leah has with an art exhibitor, whom she got in touch with through her well-connected family. The ruthless exhibitor has promised to screen Leah’s work as long as it meets her standards. When Leah shows her the Barrier Block footage, the woman scoffs that it needs more “edge.” What she means is that it needs drugs, violence—poverty porn. And Leah complies, willing to do anything the woman says without really thinking twice; she’s not an interesting character to watch, because she’s not actively making choices so much as she’s doing what she’s told. A Brixton Tale will tell you that white privilege breeds exploitation, but if you already knew that, then there’s nothing much else to take away.