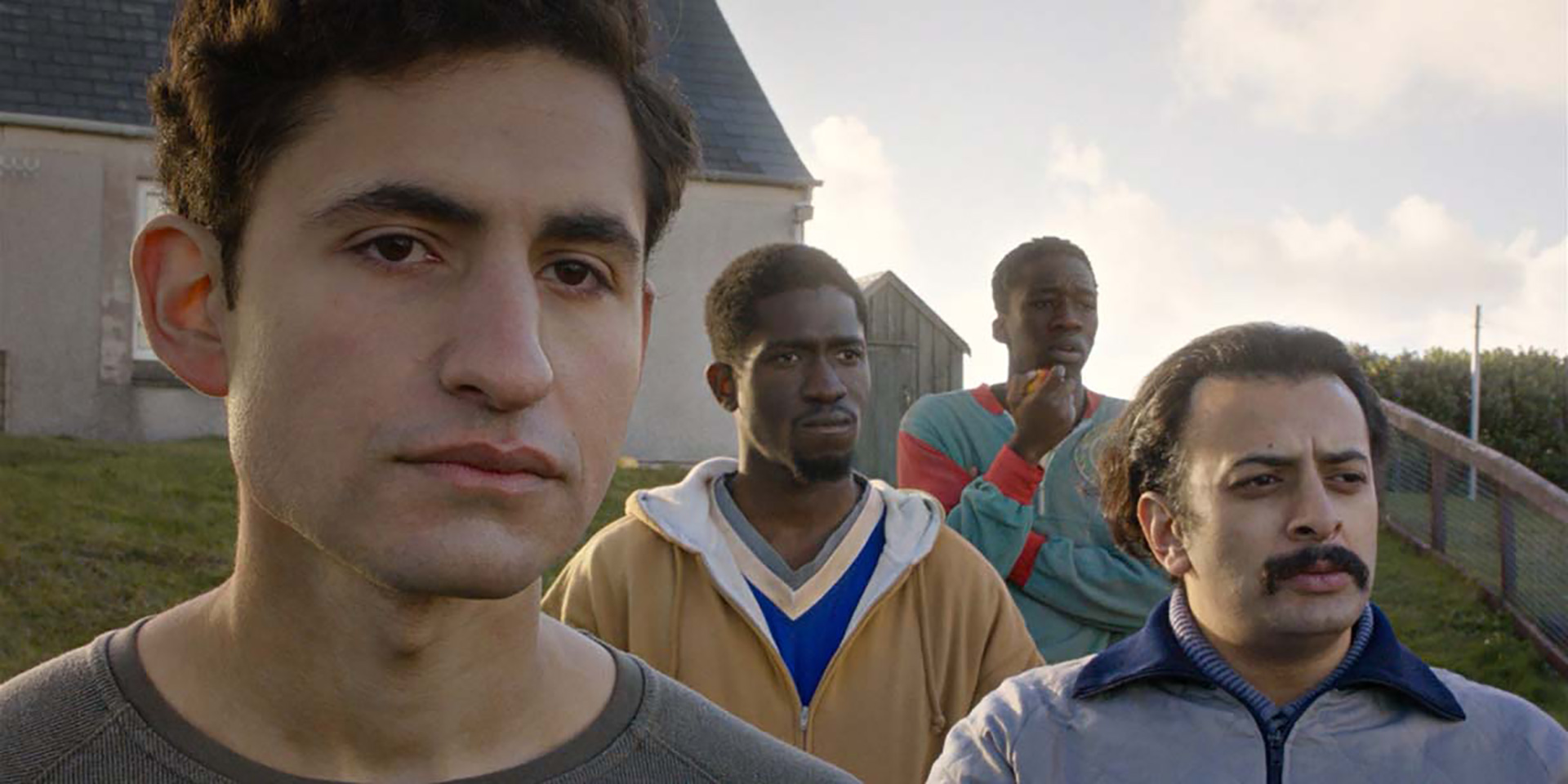 Two Africans, an Afghan, and a Syrian walk onto a remote island in Scotland. The punch line potential is infinite. Writer/director Ben Sharrock knows it too as he places them all in the same cramped apartment with a “Refugees Welcome” banner outside so they can argue about the merits of Ross and Rachel’s “break” courtesy of a burned Friends box set left behind by whomever lived there last. Add an eccentric cultural awareness course led by a duo in Helga (Sidse Babett Knudsen) and Boris (Kenneth Collard) who teach sexual harassment by having the former smack the latter’s intentionally handsy dance partner in the face and you’ll find yourself mimicking the class of foreigners watching in stunned silence thanks to the dryly humorous mix of confusion and horror.

Sharrock’s Limbo is very British in this way despite its multi-cultural cast of strangers in a very strange land. Omar (Amir El-Masry) fits perfectly as the straight man doing everything but mugging for the camera in response to whatever wild scenario unfolds before his eyes. He’s a promising young musician forced to leave his country after the Assad regime bombed it to the ground. With his parents residing in Turkey and his brother Nabil (Kais Nashif) staying behind to fight, all Omar has is the oud he hasn’t played in months because of a busted hand well past its need for a cast. He can’t busk for money and he can’t procure a job because of his status. There’s nothing to do but wait and hope for asylum.

It’s the same for the Freddie Mercury-loving Farhad (Vikash Bhai) and bickering brothers Wasef (Ola Orebiyi) and Abedi (Kwabena Ansah). They go to class, congregate by the local payphone to call home (as one character states: cell reception was better in the middle of the Mediterranean), and keep an eye on the mailbox for a letter sanctioning their stay. And when down time isn’t spent watching Joey Tribbiani’s latest antics, this quartet wanders the island to show us just how eccentric its nooks and crannies are. From townies doing donuts in the sand to a half-empty grocery with a spice section limited to ketchup and mustard, it’s no surprise Farhad eventually brings home a pet chicken. The Outer Hebrides doesn’t hold much for residents let alone their guests.

What begins as a modest and perhaps slight take on the refugee crisis tinged by an acquired yet welcome taste of British comedy, however, slowly reveals its underlying drama via the stark inevitability of its existence. You can only deflect from your plight so long before the stress and anxiety bubbles back to the surface. Maybe its Abedi’s frustration with Wasef’s implausible dream of playing for Chelsea or perhaps it’s Omar’s mother constantly trying to get him to speak with his brother despite their differences. Hope is waning. Omar is so lost in depression that he can’t even pick up his oud once the cast is cut off. Farhad does his best to be positive as his friend’s self-proclaimed agent/manager, but the dread threatens to consume them all.

With an unexpected visit by the police, Limbo becomes less of a zany take on troubling times and more of a devastating depiction of the nightmares provided to those who were lucky enough to escape whatever war or persecution is occurring in their homeland. Fearing the unknown of the future as well as the present is a tough pill to swallow and makes these men do desperate things in order to preserve what little chance at happiness they have left. With despair, jail, and even death awaiting them, it’s difficult not to give in to the increasing futility. Just like with the donation center: that which you need is often never available. Take a winter hat. Take a bicycle. But don’t expect to ever see a coat.

To pray for that government letter is therefore akin to ensuring it won’t come. And as more hardship befalls Omar and his friends after a blizzard blows in, you have to wonder if the money spent and dangers risked was worth it. That Sharrock can so subtly tell us why it was through a brief conversation between two characters separated by the frosted glass of an interior door without actually saying the words is a testament to how well-crafted his story proves. Because while Omar would be putting his life on the line returning to Syria’s never-ending onslaught of bombs, someone like Farhad might be forfeiting his instead. Where one hopes for a better future, the other quite literally has none if the UK doesn’t extend its hand.

That’s a powerful message made more potent by how naturally it takes over the plot without fully negating the comedic edge of the whole. Sharrock takes us into some really heavy territory and yet none of it feels pandering or exploitative. We get to know Omar and his plight too well to think anything that happens isn’t more feasible than earning asylum. Add living in America knowing that our president banned Syrian refugees from entering our borders and the fact my own grandfather immigrated from that country decades ago (prior to Lebanon’s separation) only makes it hit harder personally. No matter the horror or uncertainty of what might be, watching Omar pick up that oud to acknowledge he still has today is beyond heartening. Sometimes today is enough.

Limbo screened as part of the Toronto International Film Festival.