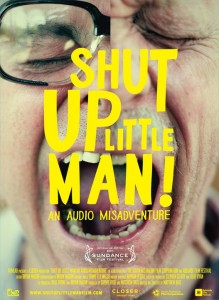 Shut Up Little Man! An Audio Misadventure is a quirky Australian documentary that centers on the underground obsession of a deeply bizarre recording. When two young men living in San Francisco discovered their next-door neighbors were a truly odd (and verbally abusive) couple made up of a “flamboyant gay man” and a “raging homophobe,” they began to record their boisterous fights, which were easily heard through their paper thin walls. This odd hobby resulted in recordings that has become a pop culture sensation.

This doc played at Sundance this year (read our review here), and will be featured at The Museum of Modern Arts and the Film Society of Lincoln Center’s 40th Annual New Directors/New Films event in New York City at the end of March, but you can get a taste of this heady concoction now, thanks to this trailer, courtesy of Trailer Addict.

(Warning language is not suitable for work, children, or civil conversation. Enjoy!)

Admittedly, if you’re unfamiliar with this tape, this is an odd and potentially off-putting trailer. I expect the next trailer will break it down a bit more for the uninitiated. In the meantime, you can get a feel for the story by checking out This American Life’s “Quitting” episode, which explores the tale in its second act. This episode is available for free at their website.

Are you familiar with Shut Up Little Man? What do you think of the trailer?