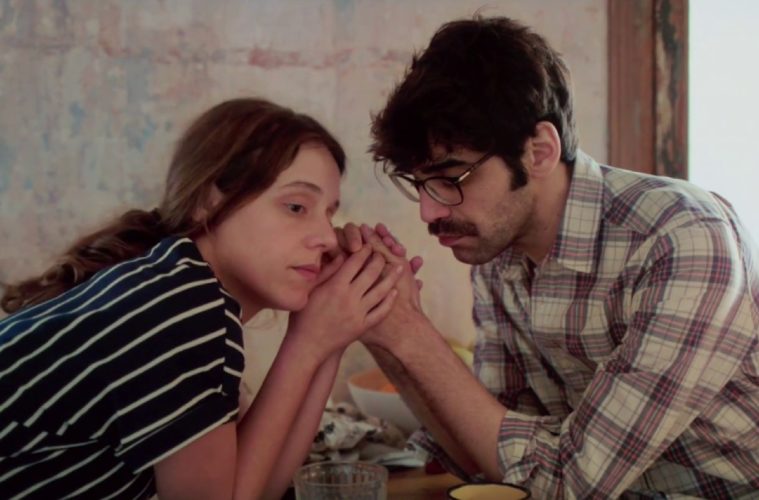 Rotterdam Review: ‘The Days to Come’ is an Engrossing, Energetic Elegy to Parenthood

“I lose my keys every other week. I’m a fraud of a person. Do you see me raising a kid?” When Vir finds out she’s pregnant, early into Carlos Marqués-Marcet engrossing The Days to Come (Els Dies Que Vindran), the nervous chuckles she breaks into next to her boyfriend Lluís quickly turn into tears, the couple’s dumbfounded faces belying the same question: what do we do now? It’s a story that’s been churned out countless times before: a young couple grapples with an unexpected pregnancy, ponders whether to abort or not, decides to keep the baby, and watches as a nine-month window in time shakes their relationship to the core. And yet The Days to Come still thrums with the compassion of a deeply felt memoir, an elegy for a couple fumbling into parenthood that bursts with the unbridled energy of a true, lived story.

For David Verdaguer (Lluís) and Maria Rodríguez Soto (Vir) are a real-life couple, and real is the pregnancy Rodríguez Soto undergoes in Marqués-Marcet’s third feature. Hastily planned after the couple realized they were expecting a child while Marqués-Marcet was busy shooting his previous Rotterdam darling, 2017 Anchor and Hope, The Days to Come unfurls like a series of journal entries chronicling the couple’s nine months before the birth of Zoe, their first child. Lluís is a lawyer; Vir works in marketing. Unsurprisingly, the pregnancy impacts their job prospects the way you’d expect a patriarchal society would respond to it: Vir is unceremoniously fired in a matter of weeks, and Lluís forced to look for more remunerative gigs–even if this means selling his soul to an uncle’s firm.

Before financial constraints start vexing the couple, Marqués-Marcet affords them a few moments of piercing tenderness, as the two grapple with the sheer magnitude of the decision they’ve taken, and anxieties teem with awe. There’s an early sequence where Verdaguer–sporting a Groucho Marx moustache–idles about with the old-time pals he’s just shared the news with, and the group improvises a street football match late at night, the young man’s luminous face breaking into a nostalgic smile for a world that drifts farther away from him every day. And there are others when Vir rehearses routines she’ll have to perform on a daily basis, dressing and lulling bowling pins while staring at old VHS footage of her parents as they themselves braced for her birth, thirty or so years prior, and The Days to Come dances between two pregnancies, present and past, its lilting vignettes coalescing into a richly nostalgic whole.

Conflict may be low-key, but it’s ever-present, and by the time tensions around the couple’s future together erupt, that the prospect of seeing Vir and Lluís drifting apart aches so badly is a testament to the enveloping chemistry Verdaguer and Rodríguez Soto have stirred up along the way. “We’re having troubles understanding each other,” she sighs, and there’s nothing polemical in her tone, just the sheer, frightening realization that their days together may be reaching an untimely end. It’s a conflict that pivots on unresolved issues, from whether or not to give in and get married, whether or not to sell yourself to a “mercenary gig,” or fight to find a better deal together.

In Marqués-Marcet’s perceptive gaze, such tensions are articulated as an integral and necessary component of the couple’s life. People fight, sure, but arguments need not spell the end of a life together, and there is something so ineffably engrossing in all the love Verdaguer and Rodriguez wring out in the silent walks that predate Zoe’s birth, as they fight to stay a whole–a struggle made of small gestures and searching glances. After a particularly bitter altercation, Lluís places his head on Vir’s womb, and speaks to the child: “don’t ever trust people who don’t argue; you and I will, too, but we will still love each other.”

Watching Vir devour the VHS tapes of her mother’s pregnancy, her eyes agleam with a bittersweet happiness for a long-gone epoch, I couldn’t help but notice the subtle irony underpinning The Days to Come. Save for an anonymous smartphone protruding into the frame in the delivery room, nobody–not Lluís, nor any other member of the extended family–is ever shown taping Vir’s pregnancy. Nobody, of course, except for Marqués-Marcet, who escorts Verdaguer and Rodríguez Soto into the hospital, and films as Zoe enters the world–an entrancing climax for a film as miraculous as the birth it captures.

The Days to Come screened at the International Rotterdam Film Festival