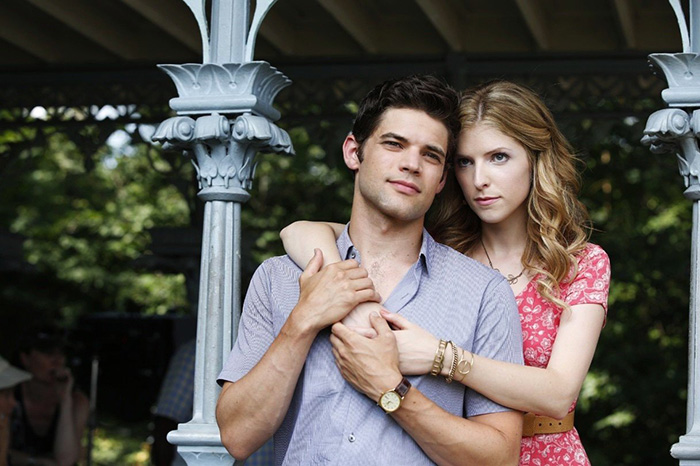 Richard LaGravenese on Following the Music of ‘The Last Five Years’

Like a musical theater version of Blue Valentine, adapting writer/director Richard LaGravenese’s The Last Five Years intimately explores a relationship from its grinning beginning through a devastating end, albeit with nonlinear retrospect. This tale of love and love lost is that of aspiring actress Cathy (Anna Kendrick) and her marriage to novelist Jamie (Jeremy Jordan). Jason Robert Brown’s bleeding-heart music & lyrics serves as an uncommon mixtape for failed relationships, as the two leads alternate songs; Cathy’s start at the couple’s end, and trace backward. Meanwhile, Jamie’s start when they’ve just met, and move forward. They share the lead at their relationship’s peak, in a proposal scene that LaGravenese shoots in a single take. Like other sequences, this moment is captured with inspired camerawork work by cinematographer Steven Meizle, while the singing is performed live.

LaGravenese is no stranger to the lovers’narrative, having written the adapted screenplays for The Bridges of Madison County, The Mirror Has Two Faces, The Horse Whisperer, P.S. I Love You (which he directed), Water for Elephants, Beautiful Creatures (which he also directed), and Behind the Candelabra. Before 2015’s limited release of The Last Five Years, LaGravenese also had a co-writing credit on the Angelina Jolie film Unbroken, collaborating on its screenplay with the Coen brothers and William Nicholson.

After seeing The Last Five Years as the centerpiece presentation at the 50th Chicago International Film Festival last October, I had a chance to talk with the Oscar-nominated screenwriter (for The Fisher King) about the project that he says is a “reward for all of the other work I was doing.”We discussed his contributions as a writer/director to a narrative that already has its story from music & lyrics, the vitalizing support that The Last Five Years received from Steven Soderbergh, LaGravenese’s perspective on the deficit of original scripts in Hollywood, and more. Check out the full conversation below.

The Film Stage: In the theater world, The Last Five Years is not cinematic at all. The two characters monologue directly to the audience, and they don’t interact with each other until the middle when their timelines intersect at the proposal. How did you work with this attribute when adapting it for film?

Richard LaGravenese: When I listened to the score, I didn’t know that it was a monologue show. I just kept getting images listening to the score years before. When we decided to finally do the film, I just started writing what I imagined the staging to be in my head. Then when I brought in Anna [Kendrick] and Jeremy [Jordan] into rehearsals for five days, I got ideas for each of the songs. And when we were shooting, a lot of camera ideas came because of music. I actually put headphones on the dolly grip, and I said, “Hear when those strings come in? That’s when I want the camera to move.”Everybody was listening to the music so that they could feel when the camera should be moving, and on what lyric.

In terms of adapting, if the music and lyrics are already there, it doesn’t seem like much has changed.

That was my key, because I didn’t want it to change. Musical theater geeks like me, we are the same personality as Comic-Con geeks — very possessive, very critical. You don’t fuck with [the material].

So you’re adding a lot of blocking, and camera framing.

But also intention. Because, for example: “This lyric that has a certain effect, she moves away. Why does she move away?”So it became subtext. I had to fill in the subtext for all of the lyrics for the person who wasn’t singing. I had to give them a story about what they were feeling, with each lyric that was being sung to them. Both Anna and Jeremy were involved in different musical projects from director Todd Graff; Anna had a supporting role in his cult film CAMP, while Jeremy was a lead in Joyful Noise. Coincidence?

Todd’s one of my best friends, that’s why I knew the score! Todd gave me the CD. We go to theater all of the time together, and he gave me the CD because I had never heard it before. I had known Anna’s work from CAMP, so I cast Anna before Pitch Perfect ever came out. That was a lucky break for us.

Jeremy had worked with Todd on Joyful Noise, but he came from Bernie Telsey, a great casting director, When he believes in talent, he is amazing. And Jeremy came in an auditioned for me, and he was incredible. He’s got the most incredible voice, and he’s a great guy.

Was directing this film more of a challenge than your previous ventures behind the camera?

Very much. Absolutely. It also forced me to think in a visual language, as opposed to dialogue. I’m a writer, and I’m not as strong in the visuals. So this was a great opportunity for me.

Have you shown this to musical theater fans in particular?

Oh yeah, they applauded. They really get it. But I’ve always had the audience mixed. The non-musical theater people are pretty affected by it, because if you’ve ever been in a relationship, this material speaks to you.

Curiously, Steven Soderbergh is name-dropped in your “Thanks”section in the film’s end credits.

He gave me Steven Meizler. I was looking for a director of photography, and Steven had been Janusz Kamiński’s assistant all through Schindler’s List through War of the Worlds, and among camera people, Steven Meizler is a god. And then he was with David Fincher and then with Soderbergh, so I said to [Soderbergh] that I want someone who is hungry creatively and who is good, I don’t want a DP for whom this is just a job. And he recommended Steven, and he so believes in Steven he’s like his agent. And I loved Steven. It was the greatest relationship I’ve had with a cinematographer ever. He had his Red camera, and we did these rehearsals together and I played him the score and he got so into it. We did a lot of these things in very, very long takes, and that’s him holding the camera during all of it. He was pretty amazing.

What about Meizler’s experience with Soderbergh might have influenced him, or you, when making this film?

My and Meizler’s style came from the material and wanting to make as organic as possible. I also remember being on set briefly for Behind the Candelabra, and Soderbergh said to me briefly, “What I do is that I come on set, and I see the scene and think, ‘How can I shoot this in as few angles as possible and tell the story?'” That’s how we approached it. And I love capturing performances. So if you have those long takes, what you are seeing the actor do is in real time. It’s not cut together and edited piecemeal. I love that.

Considering your experience with numerous romance films, what do you think is the key to making couples endearing to audiences?

How do you do that?

Flaws. They’ve got to have their ugly spots. I don’t believe in victims, and I don’t believe in perfect love, and I don’t believe in love that lasts forever in exactly the same way. The feelings change. It fascinates me because I don’t really understand what it is – how is it that you can feel so intense about somebody, and then have them, and it fades? Or, it turns into something else. You know what I mean? It’s a really mysterious property.

Has that always been your mindset? Was that the mindset when you were adapting something like The Bridges of Madison County?

For that film in particular, it was just about trying to make them human so that they didn’t sound [whispers] like they did in the book. [Laughs] It was just making the dialogue, and how they spoke to each other, to be real and organic.

What interested you in taking on the Unbroken script, of which you shared co-writing duties with the Coen Brothers and William Nicholson?

My father was a WWII veteran. He was an athlete, he was the son of Italian-American immigrants, he came back crippled, [and] he was in the Asian campaign. So, I did that for my dad. He and [film subject] Louis Zamperini have a lot of similarities.

As someone who started working with original screenplays (Rude Awakening and The Fisher King) and has now involved himself with many adapted projects, what’s your take on the cynicism related to a lack of original ideas in Hollywood?

It’s not so much the adaptations, it’s the reboots. When they’re rebooting a movie that was only ten years ago, that worry me. There are always going to be adaptations, books or comic books, and there are always originals. It feels like originals are finding more of a voice in the independent world, which is maybe as it should be. Because the studios now don’t seem to be able to know not only how to sell an indie film, or how to develop one. The executives don’t seem to understand creatively the voices. Even The Fisher King—I would never in a million years be able to sell that to a studio nowadays. In those days there were executives who actually were passionate about it. I don’t know that that would be true today. It’s different. The business has changed and it’s all about big movies and tentpole movies. but there are certain people, I’m a big fan of Elizabeth Gabler at Fox Searchlight, the fact that she got Life of Pi through the system, and not only got it through the system but that it became an enormous box office hit. That’s an executive who loves moves and has a creative eye. I shouldn’t make a general statement, but most of the Hollywood system is geared for stuff that original voices can’t thrive in as much.

How did the experience of adapting The Last Five Years differ from others?

Well, this was all for me. It was very liberating because creatively I could do whatever I want. This was a— I hate the phrase—a labor of love. Working on it was like a reward for all of the other jobs I was doing.

What’s wrong with that phrase?

It’s overused. It’s that love thing. I’m already considered a softie and all that shit [laughs].

The Last Five Years is now on VOD and in theaters.