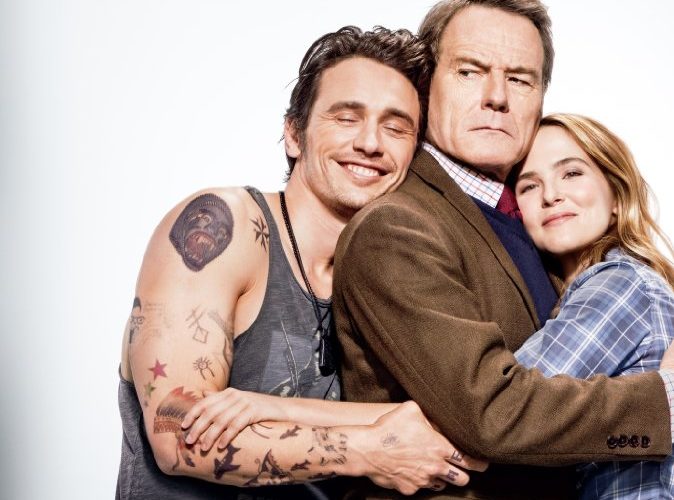 Review: ‘Why Him?’ is a Good-Natured, Scattershot Comedy

It’s not often that Bryan Cranston and Megan Mullally are the comedic saviors of a movie, but that’s 2016 for you. Their years of practice improving sitcoms (Malcolm in the Middle and Will & Grace) enable them to rescue Why Him? from abject mediocrity, as the parents of a young woman who has taken up with James Franco (this is not a horror film).

Laird is said to have “no filter,” a screenwriting hack that allows a character to say and do anything you need him to, no matter how bizarre or outrageous, without it ever being out of character. In practice, it means he swears a lot, often goes shirtless, and gets impulsive but thoughtful tattoos (like the Flemings’ Christmas card on his upper back). His home is decorated with things like a painting of two capybaras humping, helpfully labeled, in large letters, “CAPYBARAS HUMPING.” Laird adores Stephanie and wants her family to love him, but they’re alarmed by his erraticism and are unsure of his trustworthiness. Ned, in particular, in his role as protective father, wants to figure out what Laird’s deal is.

The Meet the Parents premise goes approximately where you’d expect, though not exactly, and that deviation is one of its saving graces. Directed by John Hamburg (I Love You, Man) and written by Hamburg and Ian Helfer, the plot blessedly is not about secrets and schemes, not about Laird and Ned trying to outwit each other, not about Ned becoming obsessed to the point of mania. Nor is it a What About Bob? situation, where someone is insufferably obnoxious but only one other character sees it and everyone else chides him for being such a grump. Everyone recognizes that Laird’s behavior is problematic; the only issue is whether it’s a deal-breaker.

Ditto the awkward, comedy-repelling cameos, which in this case include Elon Musk and members of Kiss. You know, it’s one thing for SNL or a late-night talk show to grab somebody famous and wedge them into a skit on the spur of the moment. If it’s not very funny, eh, you shrug and move on. When a movie goes to the trouble of cramming a celebrity into a single scene, you expect more thought to have been put into it.

But Franco’s enthusiastically moronic sweetness is perfectly suited for this kind of thing, and Cranston and Mullally play off him and each other with expert skill. The film is loose enough to allow for a variety of goofiness, much of which works just fine, like a scene where Barb, high on pot, gets amorous with Ned. It’s not that funny on paper, and there’s no good reason for it plot-wise, but Mullally and Cranston sell it. Overall, the laughs are scattershot, but the tone is good-natured, and the humor isn’t cruel.

Why Him? is now in nationwide release. See more of Eric D. Snider‘s reviews here.