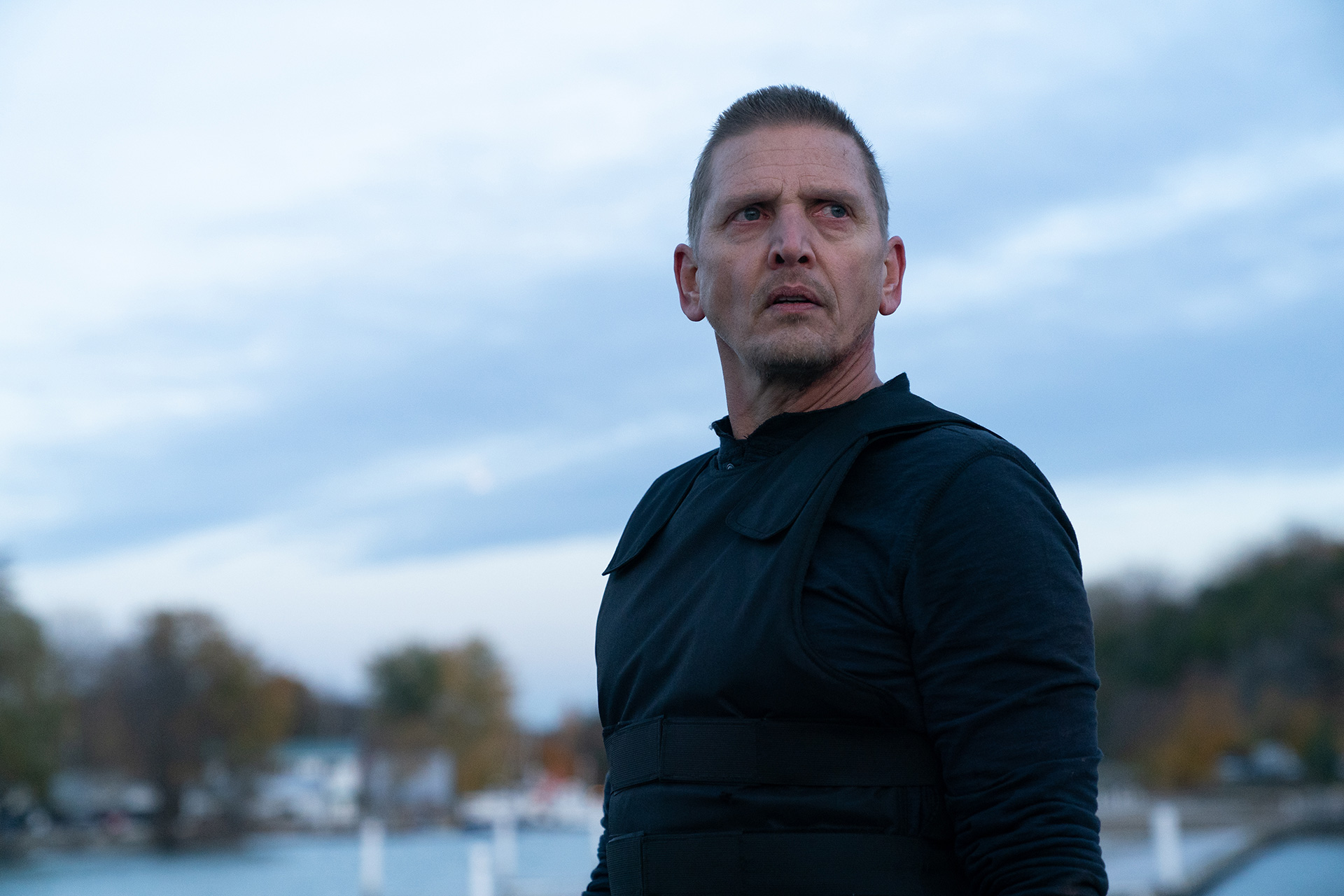 Things get off to a pretty rocky start with Brad Turner’s Trigger Point thanks to a haphazard opening sequence comprised of silencer shots and gun flashes as random bodies fall to the ground. It feels like the cold open to a television show (Turner has worked on the likes of 24, Homeland, and Agents of S.H.I.E.L.D. amongst many others during his thirty-year career) and thus the precursor to what will ultimately feel like a made-for-TV actioner. That we quickly move to a day in the life of Nicolas Shaw (Barry Pepper) with high-tech gadgets in a low-tech small-town setting with loquacious acquaintances at the diner and bookshop doesn’t necessarily help matters since it all feels so artificial. Things finally settle down upon discovering that’s kind of the point.

Screenwriter Michael Vickerman has created a man in hiding. Those bodies that fell at the beginning—that was a year ago. And Nicolas may have been the reason for their deaths. He doesn’t remember it, but his former colleagues at an unnamed agency of covert operatives do. Captured, tortured, and drugged, Nicolas gave up their identities. The only reason he’s still alive is because those who took him knew the guilt was enough to drive him underground and those who were left (Colm Feore’s Elias Kane) knew his friendship might come in handy. The past officially comes back to haunt him after all this time living the quiet (if paranoid) life now that Elias’ daughter (Eve Harlow’s Monica) has gone missing. Only Nicholas can save her.

Why? Because only he knows the identity of elusive crime boss Quinton—the person who may or may not have been responsible for hiring Fiona Shaw (Laura Vandervoort fans should know she has a total of about two minutes on-screen) to kill their associates. Nicholas doesn’t agree with that assessment, but Elias doesn’t really care since the trail to find Shaw led Monica to Quinton either way. And whether or not Nicholas wants to put that life behind him, finding out what really happened to force him into giving everything to the enemy is enticing enough to help Elias find his daughter. Like most films of this ilk, however, that mission is just the tip of the iceberg as double crosses, mistrust, and faulty information makes anything possible.

It’s difficult to really say more plot-wise since Trigger Point eventually ends as it began: inconclusively. Turner and Vickerman aren’t shy about potentially expanding this story into a trilogy (or more), so don’t be surprised when the credits roll eighty-minutes later only to reveal there are still a lot more questions than answers. And despite their want to liken things to John Wick (based solely on that being the hot “secret operative” property right now), their film is more akin to a low-budget, Canadian Bourne Identity. Finding Fiona may be the central conceit, but it isn’t the overall end game when there are so many other moving pieces to contend with. That road may answer questions Nicholas didn’t know to ask, pushing the rest further down the line.

That doesn’t, however, mean things are incomplete. Just because we’re only getting part of a bigger picture that may or may not ever come to fruition depending on box office and finances (the latter may be feasible considering production was completed during the pandemic and thus proves the financiers deemed it valuable enough to forego extended postponement or cancellation) doesn’t mean Nicholas won’t achieve what he seeks. This chapter is about retribution and he will get it even if the form it takes isn’t quite what he imagined. The one thing I wish Vickerman did while writing is not end things with the tease of what’s coming. Tie this thread in a bow and worry about exposing the next one if and when there is a next one.

Beginning and ending the film as he and Turner do guarantees audiences will feel cheated even if they receive what they were promised because they’ll know that promise was purposefully manipulated to look like it was more important than it actually was. Rather than leave with a sense of satisfaction, we wonder why we spent our money on a bridge episode without having the comfort of knowing more is coming next week. That’s the caveat of bringing so-called “prestige television” mechanics into cinema without already having the whole thing green-lit. It leaves a bunch of orphaned prologues that leveraged their disposable present for the dream of a solid future that never arrives. That’s the risk you take when buying a ticket, so do it with your eyes open.

Does Trigger Point‘s long-term disposability mean it is disposable itself? I’m sure a lot of people will say yes. However, I had a good time going along for the ride if only to watch Pepper cause some calculated chaos during his pursuit. That was enough to provide the suspension of disbelief necessary (and you’ll need it with so many details being glossed over and chalked up to Nicholas being “very good” at hacking into security systems with the push of a button on his phone) to see how things play out. Are there any surprises in that respect? Not really. Anyone who watches this genre will be able to guess what’s happening fairly early. It therefore becomes about the character. Liking him makes the journey worthwhile.