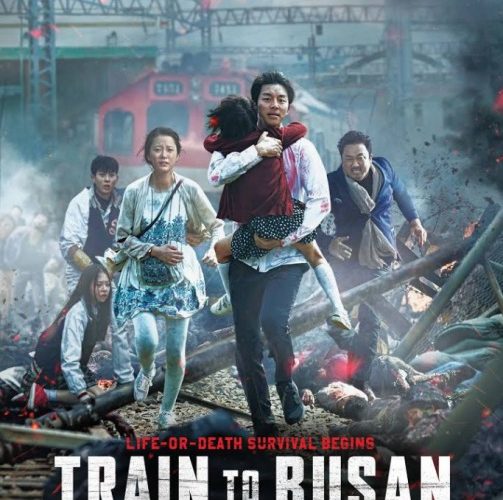 Dozens of zombie films come out every year, and yet every one of them is being dictated by a rigid moral logic. Characters are placed into categories of heroes and villains – the characters who care about themselves, and those who care about others. Few zombie films have ever made this schematic more transparent than Yeon Sang-Ho’s Train to Busan, an occasionally smart, and very entertaining zombie film that makes final judgments about nearly every major and minor character within thirty seconds of their first appearance.

This same dynamic goes for our lead, Seok Woo (Yoo Gong), a selfish fund manager living in Seoul with his daughter, Su-an (Kim Su-an), a shy young girl who resents her father in the wake of a messy divorce. Su-an has taken to secretively calling her mother in Busan in the hopes that she can leave. It’s hard to blame her; Seok isn’t exactly father of the year material.

As the film begins, he’s missed Su-an’s recital because of work, and tries to make up for it by buying her the same birthday present he’d already given her earlier in the year. Desperate to make her happy, he finally agrees to her one wish: to go visit her mother in Busan. It’s supposed to be a short hour-long bullet train ride from Seoul, but there’s not usually a zombie outbreak to deal with.

For the first forty five minutes, Yeon’s direction is all about implication as we glimpse the oncoming chaos. On the way to the train station, Seok nearly crashes into a pair of firetrucks barreling through an intersection, while their gaze is attracted to an unsettling image of a burning skyscraper in the distance.

The train is equally eerie as the camera flashes over Su-an seeing a train attendant being lunged at outside, and cycles through different cabins with a bleeding young woman mysteriously convulsing in a bathroom, and a trembling, homeless man who keeps cryptically repeating, “everyone’s dead.”

Yeon confidently keeps all these conflicts dangling, and introduces a host of other characters to establish the scale of the train, and meet potential survivors. They range from unscrupulous business men to a high school baseball team led by a teenybopper pretty boy and his crush (K-pop star Ahn So-hee) to a pregnant woman (Hong Sang-soo regular Jeong Yu-mi) and her husband (Choi Woo-sik), who has little respect for Seok’s attitude, and humorously calls him ”douche” for the entire film.

This is all generally effective although a character’s fate is evident pretty immediately when, for instance, the only exposure we have to them is that they want another passenger thrown out. The best moments ignore this social commentary, and come from little events like Su-an looking for a usable bathroom as people are starting to turn into the walking dead around her. The geography is cunningly kept clear enough to understand that the back half of the train is dangerous, but vague enough that the audience doesn’t know how many cars are between Su-an and Seok as she passes by the various characters.

This is made all the more intense by the brain eaters of the film, who are clearly of the post-28 Days Later variety as they contort their body like they’re auditioning for Cirque Du Soleil, and let out a piercing screech like blaring radio static.

The bullet train environment is the major selling point for Train to Busan, and like Snowpiercer, the film wrings out much of its momentum from a sense of visual progression. It offers a constant tension and narrative propulsion as the survivors shimmy and bash their way through claustrophobic cabins to each new locked door.

Before it moves into action territory, Yeon makes sure to keep the train passengers as ignorant as possible to the scope of the situation. In one of the most blunt, but effective moments, he cuts from the passengers watching news footage talking about the outbreak being contained and the government holding control to a birds-eye view of various explosions across a wide expanse of the city.

For seasoned fans of George Romero, let alone The Walking Dead, Train to Busan offers very few wrinkles in its elimination of zombies, but it remains mostly engrossing – especially as it starts throwing logic out the window for scenes of survivors pummeling zombies with baseball bats, riot shields, and duct-taped fists.

And whether shooting close quarters combat between the living and the undead, or offering a more broad look through slick tracking shots, Yeon’s direction remains focused on coherence above immersive movement. That’s a saving grace, especially as the zombies start swarming en masse and dominate the frame a la World War Z.

While it’s disappointing to see the film defuse its oppressive atmosphere with violence, the bigger problem comes back to the classification of its characters. There’s a certain leeway of logic in a situation of panic, but a few characters make baffling decisions that seem entirely motivated by either complicating the plot, or creating characters that are more likable, or usually, unlikable.

As always, it’s still a good time to see who’s going to escape being lunch to a horde of CGI baddies, but there was a possibility for a film that had a real emotional underpinning. It’s another well-made, culturally specific zombie film, but it could have been something much more filling.

Train to Busan is now in limited release. See a new trailer above.