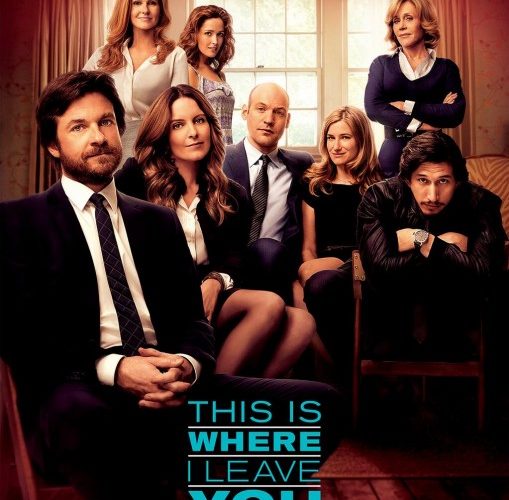 [Review] This Is Where I Leave You

This Is Where I Leave You is Franny and Zooey meets The Big Chill. Before one starts throwing accusations of hyperbole, hold on a second and let me explain. Jonathan Tropper is not J.D. Salinger and Shawn Levy isn’t Lawrence Kasdan. While overall quality comparisons would be delusional, the general connection is still sound if you’re willing to take it with a grain of salt. The former work popped into my head straight away through the film’s familial drama between siblings and its quietly brewing, completely relatable chaos. The latter took a little longer, germinating until the moment Kathryn Hahn‘s Alice pulls a Mary Kay Place—with much less tact—to cement the deal. Tropper’s adaptation of his own novel isn’t as tightly woven nor as precisely manufactured as either of those classics, but I found what’s on display emotionally relatable. I saw myself in all four of the Altman children grieving the death of their father. I felt the pain concerning everything outside the funeral itself gnawing away at them and rejoiced in their less than sunnily perfect ends tinted by hope we all optimistically pray find us as well.

And I’m neither rich nor white as many flippantly say this, The Big Chill, and Salinger ultimately target. Just because the characters are well-to-do with first world problems doesn’t make them less sympathetic. Strip away their façades and look closer at how they’re painted—admittedly to clichéd extreme—with the fallibility mankind can never shake. We’ve all felt stagnant as the world around us implodes like Jason Bateman’s Judd. We’ve all found it difficult to break free from the mold of responsibility and sound reasoning like Corey Stoll’s Paul. Add Tina Fey’s Wendy’s self-imposed prison with a man she’ll never love as much as she did her first and Adam Driver’s Phillip’s inability to earn the respect of anyone who already knows him and you have every family ever distilled to best suit the melodrama and comedy to come. With the amount of characters involved, it would have been surprising if This Is Where I Leave You didn’t fall prey to rushed resolutions and unsatisfying explanations and yet none truly derail the message. If anything, the ambiguity that’s embraced helps flesh out these people in a faux three-dimensionality their otherwise stereotypical existences shouldn’t possess. We don’t need to know more than a casual reference to a miscarriage before understanding why Judd and wife Quinn (Abigail Spencer) have been emotionally on the rocks enough to push her into an affair with his boss Wade (Dax Shepard). And Wendy’s ambivalence playing mother to all despite having a hole in her heart just needs the quick revelation of how deep her relationship with tragic high school sweetheart Horry (Timothy Olyphant) went.

Tropper infuses a ton of these soap opera-y plot points and while on paper they can look cloyingly over-the-top, there’s a subtlety in the roles they play towards the character development of those affected. It also doesn’t hurt that the main quartet is sarcastic and cynical enough to call each other out on their shenanigans whether Phillip oedipally dating “his mother” in Connie Britton’s psychiatrist Tracy, Paul becoming the defunct and rigid patriarch ruining everyone’s fun, or Judd unraveling at the seams. Thrusting them together to sit Shiva because Mom (Jane Fonda) explains it was their Atheist father’s last wish only ensures their struggles get aired without censor for our enjoyment and their catharsis. That doesn’t excuse some total attention grabs like a revelation concerning Debra Monk’s Linda, but not everything can work perfectly when you’ve so many fireworks. Enough does, though, and in a natural way thanks to some worthwhile performances by all involved. Driver steals the show as the hilariously complicated younger brother doing his best to exit the immaturity of his past and step up to the plate for his siblings even though he has a lot of work ahead of him to do so. Fey is fantastic in a role that’s kind of the exact opposite of what she’s used to portraying—headstrong, vulnerable, and mature. Fonda hams it up at times for comedic effect against the always deadpan and relatable Bateman, but she also possesses a few key moments of authenticity as well when called upon. And while Rose Byrne as Judd’s potential rebound, Hahn, Britton, and Olyphant are more pawns than complete people, they each serve their purpose effectively.

Add the blatant comic relief from young Cade Lappin’s self-potty-training Cole, Ben Schwartz’s Rabbi Grodner — who, of course, was an old school chum of Phillip’s nicknamed “Boner” — and the constant desire for slap fights on behalf of the Altman men, and, at the very least, one shouldn’t be bored. After all, it has been years since the whole family was together in the same room so physical and verbal chaos is a foregone conclusion—especially when we learn Mom has made a career publishing studies concerning the private lives of her kids’ youth. They have a lot of frustrations to get off their chests, a lot of repressed love to receive, and even more to give. These seven days aren’t going to solve their problems, but they will remind them that they aren’t alone. They never were.

This Is Where I Leave You opens wide on Friday, September 19th.