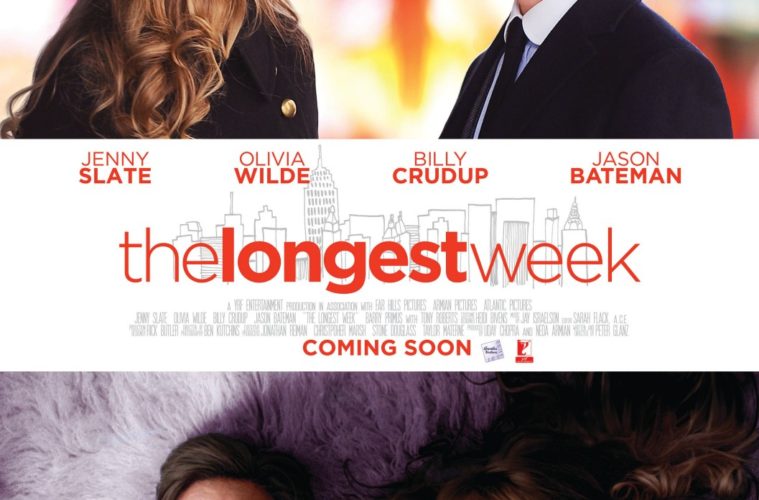 Clearly inspired by the works of Wes Anderson and Woody Allen (although failing to reach the heights of either), The Longest Week follows Contrad Valmont (Jason Bateman), a philandering pseudo-intellectual who has been living off of his father’s hotel fortune. At 40, his delusional bubble is final burst when his parents, on a whim of wealthy petulance, get a divorce and decide to cut him off. Conrad is forced out of the hotel sweet that he had been living in for his entire adult life. Now, without the financial support of his parents, he seeks the shelter of his friend Dylan (Billy Crudup). The two possess a mutual envy and the tension between them only builds when Conrad steals Dylan’s girlfriend Beatrice (Olivia Wilde) out from under his nose.

Conrad attempts to conceal their blossoming relationship from Dylan, who tries to tries to set him up with Jocelyn (Jenny Slate). The four go out on a double date, which only serves to heighten Dylan’s suspicion about Conrad and Beatrice’s romantic involvement. As the story unfolds, Conrad struggles to perpetuate the facade of wealth he thinks that Beatrice, like all previous romantic involvements, have sought from a man of his reputation. Eventually the web of lies and deceit become too much for Conrad to sustain and he must confront his current reality. The romantic dramedy is a well-crafted tale with a few unexpected flourishes of French film noir and is photographed beautifully by cinematographer Ben Kutchins. Writer-director Peter Glanz shows a great confidence in his craft, which is displayed in the films’ specific choices in shot selection and tone. It’s nothing particularly ambitious as far as composition and framing are concerned, yet there is something in the cohesion of the rhythms of the performances and the confidence in letting the shots breath and linger that gives a film a soothing quality. It’s nice to see a more subtle approach from Peter and editor Sarah Flack; an impressive feat considering this is Glanz’s first feature film.

The performances from the ensemble help to redeem the mediocre story as Bateman and Wilde are clearly professionals at this sort of drama. Slate’s piercing humor provides a much needed jolt into the sometimes slowly paced story arc, but it is Crudup that truly shines. He somehow manages to take a wealthy artist, whose uselessness is even addressed by Slate’s character at one point in the film, and make him endearing and fully realized. This is despite the limited screen time and some clever, yet superficial dialogue.

Unfortunately, this isn’t enough to compensate for a story that at often times tedious and without meaning. Although Conrad does redeem most of his prior indiscretions, he still ends up reverting back to his old ways. His character arc is so disappointingly minuscule that perhaps that’s the point. Nonetheless, taking his unexceptional journey as it, I found myself wanting more. Glanz has moments where it feels like he might pull off something substantial, but in the end, he comes up lacking. Not irreverently quirky enough to possess the charm of a Wes Anderson film, yet too offbeat to really appeal to a mass audience, I fear this will get lost in the fray. Despite the exciting notion it’s reaching for something different, The Longest Week is a middling experience.

The Longest Week is now in limited release.