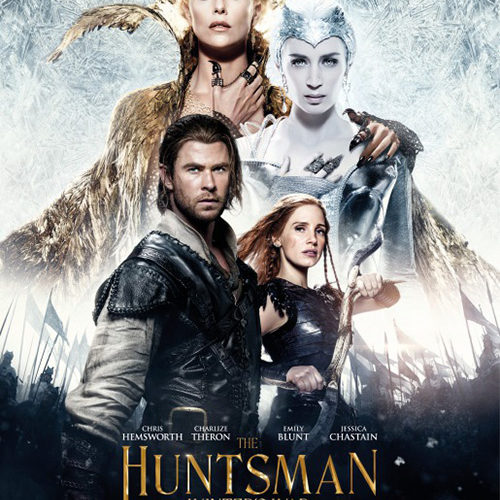 The level of complication related to relaying the basic facts of The Huntsman: Winter’s War could be seen as the greatest strike against the film. When one has trouble describing the “what” and the “why” of a thing, it can be nearly impossible to move beyond those questions in order to assign any sort of subjective value to the experience of the thing. Existing as it does in a liminal space between sequel and prequel, spin-off and continuation, The Huntsman: Winter’s War is a film that is ungainly in ways both narrative and aesthetic.

It is all the more shocking, then, that in spite of some egregious filmmaking and storytelling missteps, on top of its status as a symbol of everything wrong with our modern filmic obsession with origins and franchises and branded properties, the film still works as both a charming romance and a rollicking adventure tale. Should anyone ever doubt the salvaging power of proper casting and chemistry in a film, one only need point their attention to this strange beast of a movie to correct them.

The story here begins many, many years before the narrative of Snow White and the Huntsman, with Ravenna (a gloriously arch Charlize Theron) using her wiles and magic to steal the throne of some unnamed kingdom. By her side is her sister Freya (Emily Blunt), who is making eyes at a nobleman even as the body of the king lies in state before her. The stage is set for a classic fairy tale romance, though things take a turn for the decidedly dark when her noble suitor kills their lovechild and unleashes in Freya the same magical power that her sister has so gleefully embraced. Now able to control and create ice, Freya moves to the north to set herself up as the Ice Queen. There, she slaughters kingdom after kingdom, sparing no one save for the children, who she shuttles to her citadel in the mountains to be trained as her new soldiers, her Huntsmen. Among these child soldiers are Eric and Sara, a capable fighting pair who grow up to be played by Chris Hemsworth and Jessica Chastain.

That a romance should develop between these two mighty warriors is unsurprising. Amazingly, though, the two are able to sell their deep attraction and the world-changing might of their affection from moment one. Both Chastain and Hemsworth are actors whose expressive features make them adept at portraying steely resolve and goofily unbridled happiness, and the extremity and malleability of their expressions serve them well here. Hemsworth in particular seems to take to Eric’s unrestrained joy in Sara’s presence as a license to be lean into the charm and charisma he is often asked to suppress in other roles. Many movies have two characters say they love one another while never breaking their stolid visage, but this film seems to understand the physical change that someone undergoes when they actually find love. It’s a bizarrely true and unguarded portrait of human emotion, and it goes great lengths to making up for the deficiencies of the story and filmmaking.

Freya’s kingdom has a golden rule, and that is that love is forbidden. She uses her loyal soldiers and her icy powers to divide the two lovers just as they are about to run away, and this sets the stage for the narrative break during which Snow White and the Huntsman took place. This film, skipping over that story, finds Eric living alone in the woods, victorious but still in mourning over the loss of his love. Snow White’s emissaries find him and draft him into service, setting him up with two dwarves (Nick Frost and Rob Brydon) who serve as his companions and stupidly effective comic relief. Their mission is to retrieve the Magic Mirror, take it to Sanctuary, and make sure that it is hidden away forever. This plan is complicated by the power of the mirror, and the agents of Freya, who desires the object for which her sister, Ravenna, died.

That everything previously described is just the set-up of the essential plot of this film should serve as a warning of the narrative convolution of this film. Even with the inclusion of narration by Liam Neeson, the prelude still feels obligatory and perfunctory. In trying to create a sequel that justifies its pivot away from Snow White with the inclusion of prequel elements, screenwriters Evan Spiliotopoulos and Craig Mazin inadvertently craft a narrative Gordian Knot, one which makes both simple summation and spoiler avoidance nearly impossible. Moments that should be twists instead feel like obvious narrative necessity, which alienates us from the characters that see these moments as shocking.

Not only that, but director Cedric Nicolas-Troyan subscribes to the Christopher Nolan school of fight choreography, shooting most fights so close and so frenetic that one is left to discern the beats of the battle through sound design alone. The editing is at times truly atrocious, with an actor in the background in the middle of one action before the scene cuts to focus on them doing something completely different. Shoddy CGI likewise mars what would be otherwise stunning establishing shots, and the film is a tremendous step backward from the visual imagination of the previous film – doubly shocking because Nicolas-Troyan was the visual effects supervisor on that film.

Yet somehow, beyond all expectation, these seemingly fatal flaws are redeemed by the characters and their relationships. The dwarves, who are soon romantically and comically paired with a set of female counterparts (Sheridan Smith and Alexandra Roach), provide dumb, sometimes groan-worthy asides to the action, but their banter and budding romances work because the actors truly give themselves to those pieces. Emily Blunt takes the Ice Queen, a figure whose title is often used to symbolize a lack of feeling, and instead imbues her with crushing sadness and pain. Rather than make the easy choice of playing someone whose heart is frozen, she plays instead as someone whose heart is constantly bleeding.

As previously stated, Hemsworth and Chastain are the true stars here and their time on screen is what people will remember most. Chastain’s Sara could be the humorless warrior princess with a heart of stone, but instead she treats her as a fully-formed woman with agency and desire and thoughts that change and adapt from one minute to the next. She loves and loathes and fights and fawns in equal measure, never feeling the need to compartmentalize what are, in essence, all equal parts of herself. This plays effectively against Hemsworth’s Eric, who is too happy to be near Sara to allow himself to be swallowed up by masculine expectations. If being in love openly makes him look like a fool, he will appear to be a fool, and even in his moments of daring he is not above laughing at himself. Their moments together are truly something to behold.

Fairy tales often hinge on the premise that true love conquers all, but The Huntsman: Winter’s War understands that love is not magic. It doesn’t bind two people together on a whim, nor is it preordained. Love is a promise and a choice, both of which are remade every day with every decision someone makes. In spite of all of its myriad shortfalls, this film succeeds as well as it does because it does not shy away from this truth, and because it gives us a romances that feel so true between people we would like to see succeed. Maddening as every other strange, lazy, or sloppy decision in this film may have been, getting that one element right really was enough — true love really did conquer all.