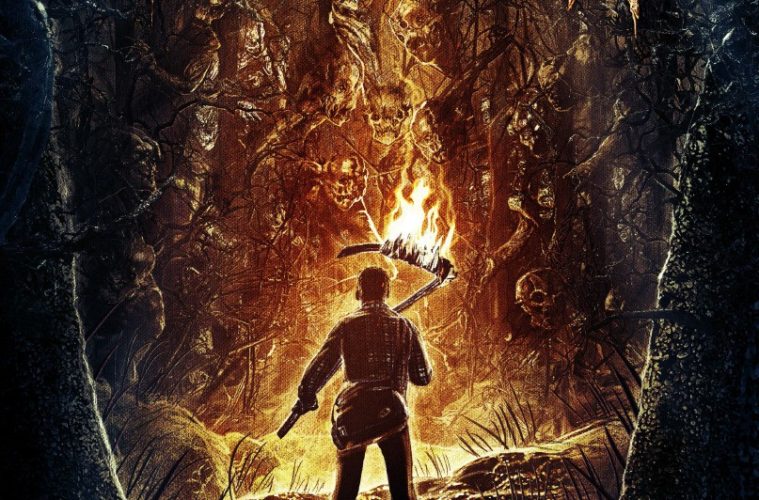 Don’t go to Ireland or, better yet, don’t go to the part of Ireland where your insane neighbor tells you to stay out of the woods is the moral of The Hallow. Also, when something crashes into your child’s bedroom and somehow slams the door, don’t assume it’s a bird and move on with your lives as if a clear set-up for a horror movie didn’t just occur. Somewhat naive characters and the obvious sense of dread in the introduction implies director Corin Hardy‘s The Hallow isn’t exactly going to reinvent the wheel, but that’s acceptable, considering the final product tells a familiar horror tale notably well.

It’s tree doctor Adam Hitchen’s (Joseph Mawle) job to inspect a small Irish town’s woods, which are meant to be torn down. Adam, his wife (Bojana Novakovic), and child aren’t greeted with the warmest of welcomes. Then again, they’re in such an isolated part of the country there’s only a few distant neighbors around to give them grief about toying with those creepy woods. While it’s immediately obvious something is not right in the forest, the “there’s definitely something wrong here” set-up is an effectively streamlined one. In fact, the first act is the the highlight of the film.

We know something is wrong at the start, but Hardy builds a suspenseful mystery around what lurks in the woods. Hardy and his co-writer Felipe Marino nail the build-up to the initial creature reveal for two reasons: they get us invested in Adam and his wife, Clare, and they know exactly when and how to reveal the demons (or fairies) that torture the couple. There’s no teasing when it comes to unveiling these monsters, just good old-fashioned, well-earned suspense. On top of that, when the monsters are fully out in the open, they live up to the well-drawn suspense — they’re truly horrific. These are real deal practical monsters, which the effects and make-up team did a terrific job of bringing to life.

Changing tones, the first act is a mystery, the second act is a siege film, and the third act is a chase, and the first two acts are more exciting than the finale. The suspense and scares turn end up turning into pure mayhem. The ticking clock is exciting — stay alive until sunrise — but The Hallow ends up becoming a whole lot of running around, unable to energize certain tropes the way the first two acts did. Using a camera flash in a horror movie isn’t a novel idea, but it’s well done here — at least until the ending. By then, the momentum and scares ultimately dwindle.

If anything keeps the third act afloat it’s Novakovic, Marino, and a notably good baby actor. Not only does Corin Hardy have an eye for atmosphere, but also for performances. It’s obvious why The Hallow got him in the director’s chair for the remake of The Crow, because he shows plenty of promise with this feature directorial debut. While Hardy’s film ends on a whimper, The Hallow is still a handsomely produced horror movie with genuine scares, great monsters, and fine performances.

The Hallow premiered at Sundance Film Festival and opens on November 6th.