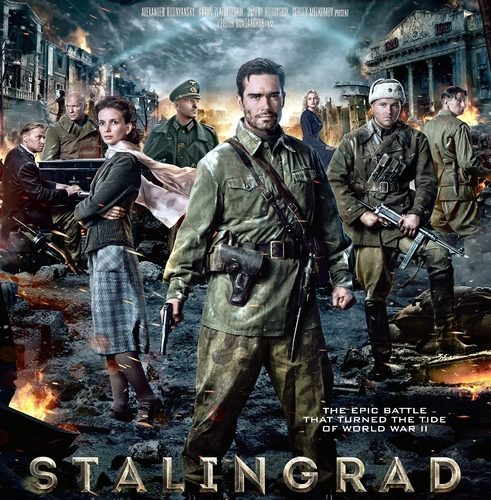 Harkening back to IMAX’s origins, Stalingrad — the highest-grossing Russian film of all-time — makes full use of the format with an absolutely dazzling sound mix and disturbingly realistic mise-en-scène. The format, though, ought to encourage more experimentation; watching a still environment in the film’s more quiet moments should have been rendered in a traditional aspect ratio, returning to a full frame for the action (taking a nod from The Hunger Games: Catching Fire and Mission: Impossible Ghost Protocol).

Opening in 2008, as a Russian forces spring to action during the Chinese Earthquake, the film establishes itself as a work of national pride wrapped in the form of a heritage spectacle. And what a spectacle it is, as filmmaker Fedor Bondarchuk then shifts to several stunning action sequences focusing on a small group of Russian fighters; the story specifically details how the men were ambushed by the evil Germans in the nearly flattened city of Stalingrad in the autumn of 1942. Advancing into the city as it’s captured, a small band of Russians troops set up command in a devastated building as residents are shipped off to concentration camps or brutally killed. Katya (Mariya Smolnikova), a woman who has remained in the building, offers assistance, putting a human face on the conflict and a reason to fight for mother Russia (she’s also “the mother” of our frame narrator). Bondarchuk is skilled at establishing the physical lay-out of the building and the small corner where the fighting takes place, however, the lack of character development amongst the men is a little problematic.

The Germans, in contrast, as evil as they are, are a bit more developed, including Captain Peter Kahn (Thomas Kretschmann) who retreats from the battle, raping Masha (Yanina Studilina), another woman that has remained. Masha, in contrast to Katya, is forced to use her sexuality to remain alive, an important human element that is mostly effective in the film’s more restrained moments. While the most interesting characters are these two woman, unfortunately their time on screen is all too brief.

Despite the presence of two contrasting women functioning as objects of desire at times, I admire that they are given more psychological weight than the men on the battle field. While this group is the focal point, it’s disappointing we know so little about the male leads, including Gromov (Petr Fedorov), Astakhov (Sergey Bondarchuk), Chvanov (Dmitry Lisenkov), Polyakov (Andrey Barbash), and Krasnov (Oleg Volku). Running over two hours and ten minutes, Stalingrad could have benefited from some tightening, as well as some additional character development.

Working as a heritage film, designed to inspire national myths, it certainly resonated as intended with its audiences at home. Narratively, it’s a bit scattered, but, as one might be able to tell from its presentation, the action is the real star; as an IMAX spectacle deserving of the format, it’s worth seeking out. The IMAX format itself was born from an organization tasked with educating a nation and the world about itself (the National Film Board of Canada).

Before the IMAX corporation was launched, various experiments in large screen multichannel storytelling were given a trial run in world’s fair expos. I have a feeling the founders of the format – Graeme Ferguson, Roman Kroitor, Robert Kerr, and William Shaw — would approve of Stalingrad, which advances the format while returning it to its roots. This is certainly more deserving of an IMAX screen if only for a week than the usual grab for additional box office dollars, such as Paranormal Activity 4: The IMAX Experience.

Stalingrad is playing nationwide, for one week only, in IMAX 3D.