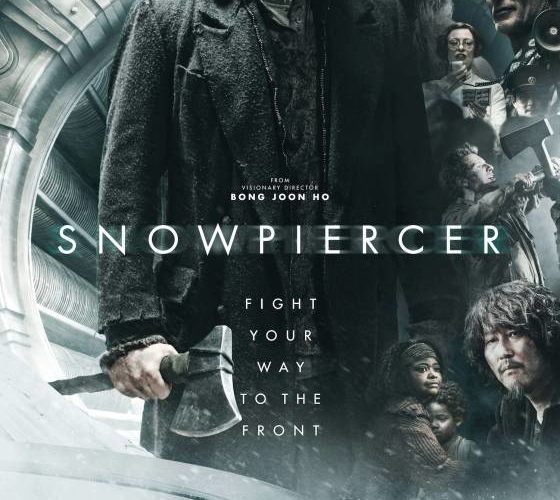 An impossibly long train, filled to capacity with the remnants of humanity, hurtles across an icy, unforgiving wasteland in Bong Joon-ho’s Snowpiercer. Like its titular train, which runs an endless loop around the frozen globe thanks to a perpetual motion device, this new sci-fi epic is a spark of life amidst a harsh landscape of its own; the blockbuster movie season. With so many plastic franchise pictures deluging us in special effects and massive production set pieces, often to increasingly diminished effect, it’s a joy and relief to find a film that gives us a new kind of space to inhabit while masterfully telling a story that resonates.

That’s not to imply, however, that Snowpiercer is some sort of sedate indie thinkpiece or that it doesn’t offer its own bevy of impressive effects and breathtaking production design. In point of fact, Bong’s latest is his most visceral and action-oriented film to date, tapping into the generous fantasy of its stylized source material—a French graphic novel from the 80’s—and imbuing the final result with the dizzying structure and pathology of modern video games. Yet, while Bong utilizes the current pop-culture miasma to ground and decorate his story of an impoverished sect of lower-class passengers fighting their way through the bourgeoisie luxury of the front, he doesn’t depend upon that milieu for sustenance. If Bong movies like Memories of Murder and Barking Dogs Don’t Bite established a fondness for the edge of 1970’s American cinema, and The Host adopted the paranoid wonder of young Spielberg, Snowpiercer forages for sustenance in the work of cinematic sci-fi pioneers like Fritz Lang’s Metropolis and Ridley Scott’s Blade Runner, showing a particular fondness for Terry Gilliam’s Brazil. In fact, the narrative is kick-started by a man named Gilliam, an old, wizened lifer that was once in cahoots with the enigmatic brain trust of the super-train, but now cares for and leads the disenfranchised in the tail section.

This obvious phantom, played by John Hurt (the real-world Gilliam’s latest choice for his elusive Don Quixote), isn’t even the film’s most obvious evocation of the surrealistic director; that would be Tilda Swinton’s frightening yet pathetic Mason, a lock-step puppet tyrant with coke-bottle glasses and intricately nightmarish dentistry. Mason, the desperate mouth-piece of the train’s God-like overseer Wilford, could have stepped right out of a Gilliam concoction, but Bong establishes her as a curious by-product of this cloistered dictatorship and Swinton conjures a fascinatingly banal, vapid creature that intrigues with her intentional cluelessness.

So many of the characters and details in Snowpiercer are like this; they remind us of fragments and shadows we’ve seen before, but are presented here in a new context, fully-formed and furnished by Bong’s assured direction. Caught in between Gilliam, Mason, and Wilford is the real de-facto leader of the tail-section rebellion, Curtis (Chris Evans), a man who wasn’t born on the train like his second-in command Edgar (Jamie Bell), but remembers exactly how bad it was before the elite gave them what little scraps they have now. The truth he carries within him fuels his resolve, while stolen children, squalid conditions, and processed food bars (the special ingredient would cause Chuck Heston to retch) drive his compatriots. The secret to the revolution are messages hidden inside those sickening bars, sent from an informant somewhere on the train. One of them mentions a security officer who designed the locks on each section, now stowed away in the cryo prison a few cars up. As one might anticipate, there’s a lot of early narrative legwork that Snowpiercer must go through to get us acclimated to this absurd microcosm of humanity. The concept of all Earth’s people getting on a train to avoid freezing to death is indeed a big pill to swallow, as is the notion that a perpetual motion machine’s best rescue of humanity would be in service of a titan locomotive. What Bong wisely does is simply hint at these past events, just enough so that we see the hubris behind both the men who damned the world and the one who believes he saved it. Instead of heavy back story, we are dropped immediately into the tail-section, in an overwhelmingly bleak landscape whose color palette is one of dust, dirt and gloom, and then invited to a single visual spark of brightness; the vibrant yellow of a young woman’s coat. That this invader into the land of shadows is actually a usurper from the front, taking away young children from the tail’s surly rabble, abruptly emphasizes the disparity between the haves and the have-nots in this cruel parody of our modern world.

The bulk of Snowpiercer is a classic kind of quest tale, sparked with notions of real immediacy; Curtis and his crew will fight their way from the back to the front, past Mason, Wilford’s soldiers and the privileged citizens who comprise the front compartments of the train, all in an effort to arrive at Wilford and the Sacred Engine, the device that propels them all forward. It is in these passages that the movie excels, as both an exciting slice of adventure cinema and as a scathing and hot-blooded indictment of inevitably unjust and impenetrable social orders. There’s a skirmish in the train’s mid-section, between Curtis and the tailies and Wilford’s ax-wielding death squads that taps into the grittiness and ragged austerity of Korean genre filmmaking while also deconstructing the amoral headspace of modern video-gaming, all the while convincing as a thrilling and palpable battle. This scene also signals a crucial juncture in the visual style; everything beyond this hooded army belongs, as Mason, would say, “to the front.”

In this about-face, Bong reveals that Snowpiercer isn’t just Mad Max on a train, but something more far-reaching and intrinsically strange. The cars ahead hold a carnival of demented wonders, including a classroom of indoctrinated children tutored by an absolutely unhinged Alison Pill, who takes every zealous mouthpiece you’ve ever seen and wraps them up in a twisted vision of upper-crust flakiness. All along the way the details of this world accumulate, but with an emotional price; from the flammable drug Krono that Kang-Ho Song’s security specialist covets to the stark, bracing ice vistas that frame the train’s social upheaval, new wrinkles weigh down our struggling warriors while recasting our own image of them. There’s a near-end confession from Evans’ Curtis—given right before opening the door that conceals the truth of Wilford—that hits us right in the guts and reconfigures the basic stakes of the story, coming just before Bong demolishes them again with the final scene. Evans, leading a diverse and sublime group of wonderful actors, is a revelation here, even if he’s really just building on the rigid but emotionally elastic men of action he’s played in the likes of the Captain America films and Danny Boyle’s Sunshine. A film like Snowpiercer depends on fanciful, outsized charisma but also on realistic human drive, and Evans demonstrates these qualities, coupled with such a pungent and tangible sense of regret that it adds agency and urgency to everything Curtis does. Hurt, Bell and Octavia Spencer play back-up, but do so in such specifically convincing ways that they rise above cookie cutter rebel archetypes.Kang-Ho and Ah-sung Ko, as father and daughter here, gift the picture with a bemusing and organic human warmth that doesn’t always apply to the other, driven characters. As previously mentioned, Swinton is particularly delightful, playing a character that should scream cartoon, but instead unnerves us with the plausibility of the human nature lurking under her Elmer Fudd veneer.

At the end of the day, it’s the fact that Snowpiercer—after all of its tantalizing craft and invention—does cohere into something that rises above the sum of its parts that elevates it in the current action cannon. There’s a bit of a learning curve for these kinds of allegorical fantasy sagas, and some of the early sections threaten to get away from us, but the essence of the film, its strong and beating heart, is intact and that carries us right through to the end, no matter our questions of logic regarding the setting. Like so many worthy science fiction films before it, Bong’s grim vision of a hopeless future grips us and intoxicates us because it doesn’t forget about the tenacious reality of hope itself; that in the face of unrelenting uncertainty and certain human frailty, there’s exists the spirit and drive to change a future we find ourselves racing towards. Yes, Snowpiercer is downbeat in its trajectory, but not so in its execution, that finds time for humor, heart and the rallying cry of those fighting to rise above the tide.

Snowpiercer opens today in limited release and will be expanding in the coming weeks (full list here).