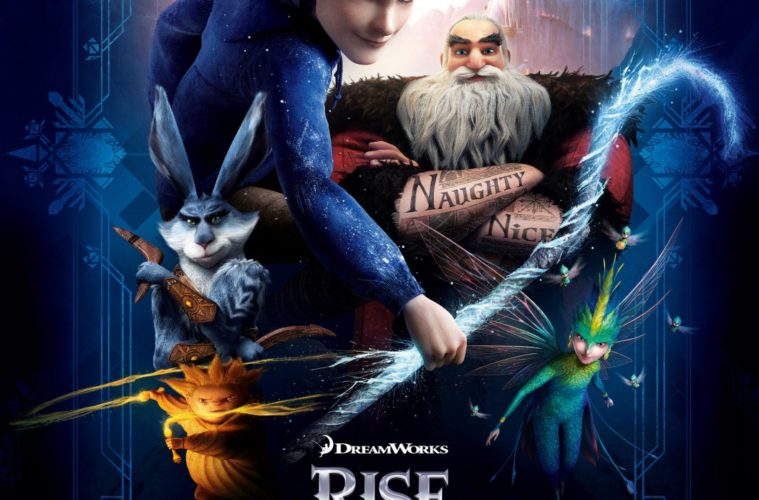 [Review] Rise of the Guardians

It was only a matter of time before someone turned our favorite holiday-bound mythical creatures into superheroes. Unsurprisingly it’s William Joyce who did. By no means a household name, he isn’t a stranger to the world of youthful fantasy with credited work as a conceptual artist (Toy Story and A Bug’s Life), television show creator (Rolie Polie Olie), and author of cinematic adaptations earning box office success (Meet the Robinsons inspiration A Day with Wilbur Robinson). His latest project coined The Guardians of Childhood caught the eye of DreamWorks Pictures early as they, director Peter Ramsey, and PG-rated screenwriting staple David Lindsay-Abaire decided to let it usher in this year’s yuletide season. Safe to assume he pitched the series to Hollywood at the get-go considering the books were published mere months ago, Rise of the Guardians came to life. Utilizing the tried and true concept that Santa Claus, the Easter Bunny, and the Tooth Fairy exist only when children believe, this action adventure is more than a high-concept idea to put them onscreen together. Skewing young to hit its key demographic of those still sleeping at night with thoughts of fantastical creatures giving gifts for being good boys and girls, there is a resonate message at play about our need as a species to stop forgetting our humanity. The kids awakening to the possibility everything has been bedtime story lies meant to delay their transformation into jaded teens grow into the pessimistic sad sacks turning our world into one built on selfish desire and cutthroat competition. The dreamers refusing to let go of life, love, and community’s wonder end up persecuted, marginalized, and possibly converted as a result.

Rise of the Guardians looks to reinvigorate this culture of imagination that is close to shrinking into nothingness. I personally discovered the ruse of St. Nick around the age of six and while that seemed young in 1988, the majority of kids these days don’t even make it that long. Watching a character like Jack Frost (Chris Pine) live three hundred years invisible to the real world without knowing his purpose therefore provides the perfect metaphor of youth’s vicious cycle of bullies and image makers ensuring coolness can’t happen until you’ve grown up and stopped indulging fiction. The joy and mystery of the unknown must be eradicated in order to overcome the fear of adulthood and the pressures it instills. Our society seems to believe the quicker we learn these ‘truths’ the quicker we can adapt and succeed. But it’s not true—we need to let loose, have fun, and laugh at the darkness knowing there is kindness out in the ether to aspire towards. This is the role bestowed upon North (Alec Baldwin), Tooth (Isla Fisher), Bunny (Hugh Jackman), and Sandy by the Man in the Moon. They are childhood’s last line of defense against the nightmares of a cynical world devoid of happiness Pitch the Boogeyman (Jude Law) has created. It only takes the disappearance of one holiday to begin an irreversible chain of events that will eradicate them all. If children wake to find the teeth they left underneath their pillows still there the next morning, a seed of doubt is planted and the tree grown shields them from the other magic now too far out of reach.

Unable to protect against Pitch alone, the Moon chooses Jack to become their savior. Bitter to have been left isolated from both worlds—not believed in by children and despised for his lack of seriousness by the Guardians—he refuses the responsibility in lieu of wreaking havoc for a laugh. Only the prospect of discovering who he was before rising from the depths of a lake with an icy touch can cajole him into joining the fight, but even then it’s for selfish gains and not the sanctity of youth. No, young Jamie (Dakota Goyo) and Sophie (Georgie Grieve) provide that added push so Jack can look inside himself and discover what it is the Moon had known from the beginning. The ultimate secret weapon, he must believe in himself before the others can accept him into their covenant of protectors. And while this spiritual and emotional journey towards redemption may appear generic on paper, the character design of its legends is utterly unique and fun. Sure, people can bicker about why Santa is Russian and the Easter Bunny Australian, but that would be preventing the magic from taking you over. While Baldwin’s accent is goofy, his muscular physique, tattoos, and unbridled wonder converge to retain the role’s essence while also making North unlike any representation you’ve seen. The same goes for Jackman’s boomerang throwing warrior, Fisher’s cutely inquisitive fairy, and Sandy’s mute yet fierce Sandman possessed by seemingly infinite power. And Law’s Pitch is dripping with British villainy as tar-black, shadowy stallions trail behind to infiltrate the otherwise innocent minds of the children he hopes to corrupt.

There are dark moments as well as sad ones with death a theme the filmmakers aren’t afraid to touch upon, but Rise of the Guardians is above all else a family friendly movie. Very few jokes carry a double meaning to satisfy parents’ adult minds and this simplicity is met with a slew of supporting characters existing for pratfalls alone. North’s workshop sloths are like cuddly Wookiees; his elves are belled minions out of Despicable Me; Tooth’s Baby Teeth are adorable little fairies serving as easy hostages; and Sophie’s cuteness rivals that of Boo from Monsters Inc. But more important than the universal tonal appeal is the message teaching us to conquer our fears and band together for strength against adversity. We have it in us to be just and having Jack and company by our side helps that potential turn real.

Rise of the Guardians is hits wide release on Wednesday, November 21st.