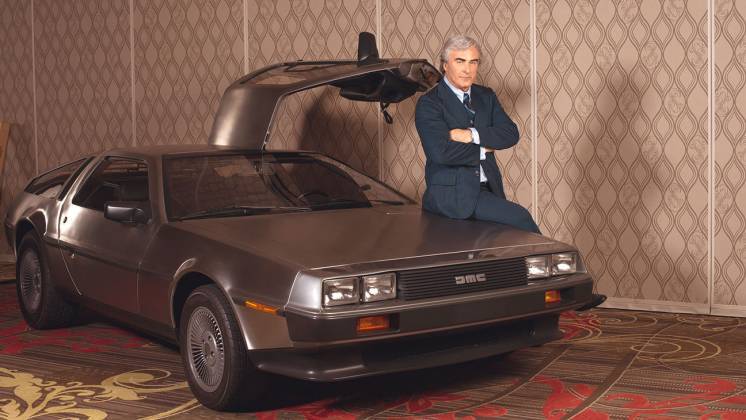 We learn early in Framing John DeLorean that many films about the famed car maker have died on the vine in pre-production, yet Don Argot and Sheena Joyce try–with the help of Alec Baldwin, Morena Baccarin, Josh Charles, and make-up experts–to capture a guy that embodied the go-go 80s. The film is mildly successful at capturing the cult of personality from multiple sources including his son and daughter, his employees both in the U.S. and Ireland, TV appearances, and the surveillance video of an FBI sting that catapulted the playboy family man into infamy. The story is framed with reflective recreations with Baldwin and Baccarin playing, respectively, DeLorean and his model wife (25 years his junior) Cristina Ferrare.

Early in the film we’re teased by his son Zach that this story will have “cocaine, sports cars, bombs, hot chicks, Reagan, and Margaret Thatcher” and yet it’s not as entertaining a tale as it might have been in the hands of someone like Cocaine Cowboys and Screwball director Billy Corben, whose tendency is to blow (pun intended) past the major players and find those at the fringes who add color. Here the color is found by Baldwin in a series of recreations that are shown all too briefly. One wonders why even include them as a framing device. Surely if A-list talent wasn’t hired, the “process” which occupies a good portion of Baldwin’s screen time would be best discussed at a post-screening Q & A rather than on-screen.

Framing John DeLorean suffers from functioning as two potentially entertaining films in one, fighting it out on screen with enough footage to fully flesh-out DeLorean’s rise to power as the executive of GM’s Pontiac division, transforming a sleepy label into a powerhouse that introduced the muscle car to America with the GTO. Along the way, DeLorean annoyed the conservative GM, wearing open-collar shirts, working out, having plastic surgery, spending weekends in California, and dating much younger actresses and models. Criticizing GM’s quality proved to be a step too far, leading to the foundation of the DeLorean Motor Company launching with a single vehicle later made famous by Back to the Future. Envisioned as a mass-market competitor to European sports cars, the vehicle was engineered by GM defector Bill Collins, played by Charles in the reenactments. The first DeLorean make was plagued by several problems and, even for a marketing genius, it’s hard to sell the value of a product that’s more expensive and less fun to drive. Despite slumping sales and production problems he was encouraged to increase volume due to government incentives in Northern Ireland which would soon come to an end thanks to the Thatcher era.

Framed with interviews from filmmakers like Back to the Future writer Bob Gale as well as DeLorean historian Tamir Ardon, Framing John DeLorean seems more concerned with the myth created by the man rather than the means to justify the frauds perpetrated by him. Shifting occasionally into the mode of a heist film as DeLorean is framed for cocaine trafficking by a DEA informant whose pockets were lined by Reagan’s War on Drugs, the film explains away the incident that ultimately led to his acquittal and only a few days later his divorce from Ferrare.

Framing John DeLorean is an entertaining and occasionally fascinating take on a playboy turned family man that unfortunately finds itself distracted with recreations that add another layer of analysis removed as Baldwin and Baccarin get into character. At times the film feels a little like a very long DVD extra for a narrative film about DeLorean that I think we’d all like to see. If Argot and Joyce want to make that film next, they may have what the DeLorean Motor Company wished it had back in 1980: a viable proof of concept.

Framing John DeLorean premiered at the Tribeca Film Festival and opens on June 7.