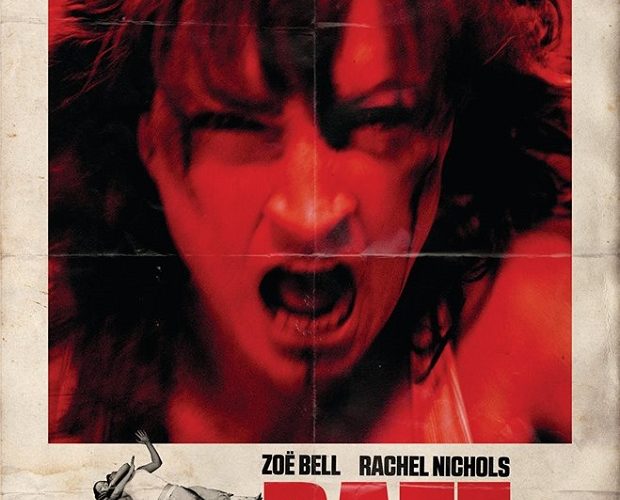 Zoe Bell established a badass reputation through her unforgettable performance in Quentin Tarantino’s Grindhouse selection Death Proof, as well as an appearance in the documentary Double Dare, and athletic supporting parts in films such as Whip It. But unlike her contemporaries, which include such tenacious personalities as Sigourney Weaver, Linda Hamilton, and MMA fighter-turned-action star Gina Carano, the former stunt woman commands attention with raw intensity, natural acting talent and fine-tuned physical prowess, a rare combination that allows her to dominate the screen in her first lead role.

Based on a concept by director Josh C. Waller, Kenny Gage and screenwriter Robert Beaucage, the twist on women in prison exploitation films begins with Jamie (Rachel Nichols), who wakes up in a mysterious room swathed in harsh red light. What looks like the beginning of an average torture porn becomes more complicated when she runs into Sabrina (Bell), a fellow captive who proceeds to bash her face in at the bottom of an underground arena. It’s then revealed that Sabrina is the iron-fisted champion among dozens of women who are imprisoned and forced to compete in a death match organized by a pair of secret society leaders (Sherilyn Fenn and fantasy film regular Doug Jones). Though the event carries a higher purpose (something about maenads and Dionysus), it primarily serves as entertainment for a group of socialites, who watch the carnage on hi-def televisions in an unknown location. Even then, the stakes are unusually high – the winners get to see their loved ones live another day, while the losers, and the people they care for, are killed. With plots as flimsy as the one presented here, there’s a tendency to favor spectacle over character development, and it’s no surprise that Raze struggles to balance the two. Unfortunately, cliches still become lazy substitutes for motivations, especially in the case of Sabrina. In addition to being a veteran and a former POW, she’s fighting for the daughter that she gave up for adoption, which makes hers the most interesting back story. But that all goes downhill the minute she cries out for the father who abandoned her – as if the torture she suffered behind enemy lines wasn’t enough to justify her tough exterior, they had to go and add daddy issues.

Regardless of its baser intentions, it’s impossible not to view Raze as a gendered discussion on whether or not women can become empowered through violence. The captors explain that the goal of the competition is to create a more resilient female specimen, and as many of the opponents are driven to a animalistic state, others still struggle to retain their humanity. Though the film’s final take on the issue leaves little room for interpretation, the process still makes for some riveting performances. In the role of born psychopath, Phoebe, actress Rebecca Marshall is a joy to watch as she struts and whistles and eyes the other women like a caged beast ready to strike. On the other end of the spectrum is Sabrina’s friend, Teresa, whose quiet dignity is beautifully portrayed by Bell’s Death Proof co-star Tracie Thoms. However, the excellent supporting cast and Bell’s riveting screen presence are the few bright spots in an otherwise anti-climactic letdown that offers little honest exploration of its overt feminist themes.

Raze is now in limited release.