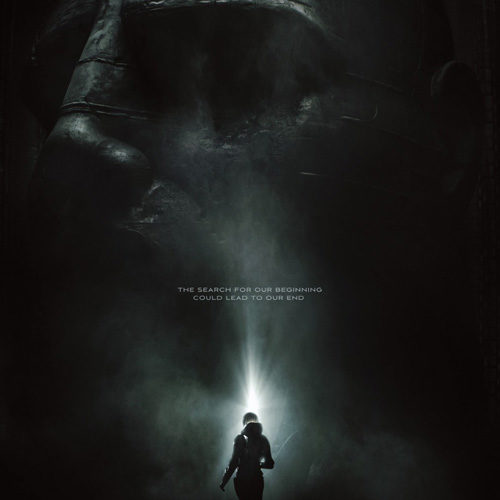 It’s hard for any director to return to the genre that once heralded their filmmaking bravado as revolutionary. Yet it’s something we as audiences crave, especially when it comes to films we love or that have earned a special spot in cinematic history. Ridley Scott has created not one but two sci-fi masterpieces with his breakthrough Alien and stunning follow-up Blade Runner. Since then the English director has strayed away from futuristic dystopias (it’s been three decades), opting instead for a wide palette of films that have established him as one of the premier filmmakers working today. And so it is that Prometheus, his latest endeavor, is an overly ambitious 2001-esque nod to the same space-opera horror that established Scott in the beginning. Known for his meticulous visual details and the manner in which he uniquely depicts environments, Scott seems right at home here. Even though at times the film feels like bloated science-fiction porn, there is a clever balance of existentialist philosophy blended with breathtaking visuals that fully immerse you in the fantasy of the future.

Prometheus, like most films, is best experienced with no knowledge of the proceedings, a near-impossibility given the never-ending litany of hype-inducing trailers that eventually dilute the very same hype said marketing has built. With that in mind, it is best to keep the synopsis brief. The script, penned by Jon Spaihts and Lost scribe Damon Lindelof from a concept by Ridley Scott, has been in development for several years and is nearly identical to the original Alien in premise. A group of space explorers and scientists led by archeologist Elizabeth Shaw (the original Girl with the Dragon Tattoo Noomi Rapace) are dispatched to a planet at the edge of the galaxy after discovering a map within a series of cave drawings on Earth depicting higher lifeforms. In hopes of discovering the secrets of these aliens, who Shaw believes humans have descended from, humanity can perhaps begin to understand the complexity of our own existence. The only problem is, of course, that once they land and start to explore the planet, their discoveries of alien life are not exactly what they hoped for.

Featuring an ensemble cast of divergent personalities, the development and relevance of each character’s fate varies on how much screen time they are given. Charlize Theron plays Meredith Vickers, a snarky blonde corporate elitist who raises doubts about these other-worldly lifeforms and seems to have ulterior motives for her conflicted rag-tag crew. Idris Elba and Logan Marshall-Green serve more as fodder for fuel than substantive players in the grand scheme of things. Michael Fassbender, on the other hand, steals every scene he’s in as David, an A.I. life-form oozing with cold, calculated charm. He oversees the system operations, a nod to Lance Henriksen’s Bishop from Aliens. Fassbender is clearly having the most fun of the bunch, reveling in the coy nature of his emotionally-detached robot, who, after watching Peter O’Toole in Lawrence of Arabia, decides to bleach his hair blonde. Rapace does her best Ripley impression, displaying a strong female will to survive, but it is overshadowed by the grandiose ambition of Scott’s narrative style. Technically speaking, Prometheus is a rapturous spectacle of computer-generated imagery that will elicit similar emotions of awe to that of Avatar. The 3D is incredibly astute in extending the depth of field of each image, with POV character HUDs and subtle variations in textures that enhance the viewing experience. The richness of the art direction and complexity of the production design are worth the price of admission alone.

Unfortunately, the bigger-than-life questions strung throughout the film, meant to evoke deeper, philosophical questions, do not always mesh with the action/horror direction the film moves in. The busy script cannot keep up with the concepts and scenes that are supposed to have gravitas. This is all a prelude to a rather disappointing finale, in which we descend into Event Horizon territory and an overall resolution that feels ham-fisted and subservient to potential sequels. These blemishes aside, Prometheus remains one of the most thought-provoking science-fiction films in recent years and should be applauded as a landmark return of one of the great storytellers in the genre.