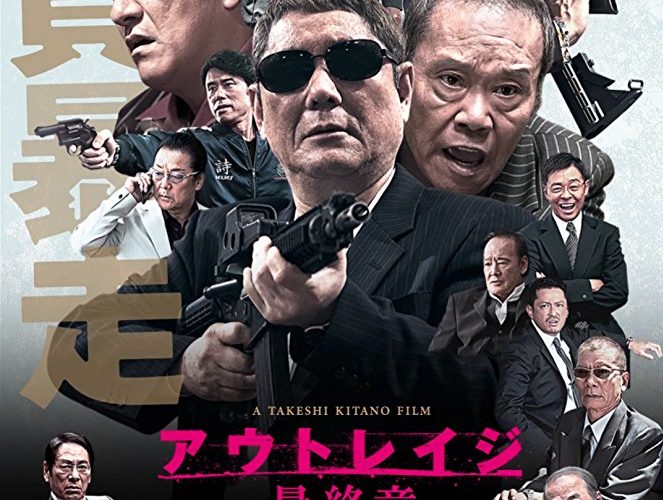 Thrilling, talky, and densely plotted to a point of convolution, Outrage Coda closes Takeshi Kitano’s Outrage trilogy, which follows various warring yakuza crime organizations in Japan and now, South Korea, centering around an enforcer named Otomo, played by Kitano under his acting name Beat Takeshi. It’s interesting that Kitano’s work first hit North America under the banner of Quentin Tarantino’s Rolling Thunder Pictures. Luckily for audiences, Kitano is a filmmaker utterly unspoiled by the post-Tarantino wave in which hitmen became preoccupied by discussions about the discography of Hall & Oates as they sliced their target’s throat with a garrote wire. (Although the two filmmakers do share a love of Godard.) Outrage Coda is a gangster revenge film which slyly favors plot over character; where the violent antiheroes talk about the film’s plot, and absolutely nothing else.

After Otomo becomes aligned with a Korean crime organization, a young yakuza on vacation on Jeju–a resort island in South Korea–roughs up a pair of prostitutes, drawing the scorn of Otomo and his men, who demand money in exchange for their forgiveness. Instead, the younger man kills one of Otomo’s partners and flees back to Japan. Soon, the yakuza organizations clash and Otomo sees an opportunity to exact some revenge.

What might sound like a by-the-numbers gangster picture eventually weaves itself into a playfully complex tale with over a dozen lead characters scheming and plotting to overthrow one another. The narrative has more in common with Shakespeare than gangster cinema in the way each betrayal is gleefully celebrated as a chief driving force in the plot itself. Unfortunately, the outcome of all this manipulation, one crime organization played off the other, is less complex, bordering on the predictable. If the denouement weren’t so perfectly suitable and fun, this might not have impacted with as much charm. It’s a flaw that could have potentially crippled a lesser film.

Kitano’s screenplay works with its tongue in its cheek, taking pleasure, topping and re-topping what has come before–often his own films, in terms of violence and the lurid creativity of each kill. Kitano has no interest in realism, pitching his characters towards humor and absurdity at every chance. This is a movie in which the lead character fires his gun into the river in a moment of frustration, followed seconds later by a close up of a fish with a bullet hole in its head floating in the water. Instead, he pushes forward with this ever-twisting plot, safe with the knowledge that if we’re having fun, audiences will happily remain in their seats.

Indeed, it’s miraculous that we spent the majority of the running time with overly dry expositional dialogue and lots of it, and in the end, we don’t really mind. At its worst, moments stray into jargon as we’re treated to scene after scene of men in rooms, discussing the fates of other men, not present. (Pity the poor audience member who forgets one of the gangster’s names.) The notion of playfully underlining the overly corporate nature of the yakuza organizations mines fewer laughs than the filmmakers evidently expected. The most effective humor come from the world-weary performances of Takashi, Toshiyuki Nishida, and Sansei Shiomi, wise and hardened men burdened with the incompetence of their more youthful cohorts. It’s worth noting the only female characters in the movie are prostitutes–perhaps not unheard of in this genre, but still, a dusty choice by Kitano.

Fans of Kitano’s Sonatine will revel in this unhinged revenge tale, even if the movie itself feels a bit too eager to recapture the magic of that earlier hit, closing with a sly nod to the cult yakuza classic. Outrage Coda is not a great film, nor an essential one, but it accomplishes what it sets out to with gallows humor and a deeply cine-literate style.

Outrage Coda plays at Japan Cuts 2018 on Saturday, July 28 and will be released by Film Movement.