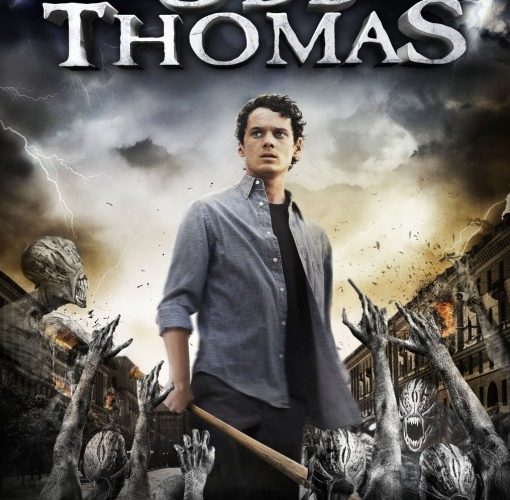 It’s August 14th in Pico Mundo, CA and the world is about to end. Well, not the world per se, but the community young Odd Thomas (Anton Yelchin) resides. Sort of. He sees ghosts of dead people with unfinished business, a gift passed down by his crazy mother wielded in secret from everyone besides Police Chief Porter (Willem Dafoe) and girlfriend Stormy (Addison Timlin). But while it allows him to help the tragic, helpless souls wandering around him to find peace and justice, it also saddles him with the evil, slithering demons called bodachs who hover around those about to inflict carnage. There’s a swarm of them today surrounding the haplessly awkward “Fungus” Bob (Shuler Hensley) and their path through town is about to lead Odd towards potential mass murder that only he has the power to stop. Based on prolific New York Times best-selling author Dean R. Koontz‘s soon-to-be seven-book saga, Odd Thomas has had a bumpy ride to US theaters after a lawsuit concerning production cost allocation held back its release. Even without this hiccup, however, I’m not sure writer/director Stephen Sommers‘ latest foray with action-packed fantasy (The Mummy, Van Helsing, G.I. Joe: The Rise of Cobra) would have earned more than a select city limited run anyway. The reason is that it feels like it should target middle schoolers and yet contains enough horror elements and gore to warrant a PG-13 if it cared to have the MPAA rate it. I’ve never read a Koontz novel, but I don’t think his target audience is pre-teens. Sadly, I’m not sure anyone much older would find the end result to be more than novelty.

That said—novelty doesn’t always have to connote “bad.” Just because I will probably never find myself thinking, “Man, I’d love to revisit Odd Thomas again” anytime in the future doesn’t mean I didn’t have a good time watching it. Once you accept the stylized dialogue coming at a speedy clip, the cheesy running jokes/puns about its titular hero’s name, and the repetitive use of comic set-ups (such as Chief Porter’s date night constantly getting ruined in differing stages of undress by Odd’s latest update on their current case), Sommers proves his knack for filming high-concept, low-IQ actioners. He tries a bit too hard to mimic Bryan Fuller/Pushing Daisies whimsy with mild success, but even that possesses a certain type of sweet charm whether an innocuous one or not. Frankly, entertaining goes a long way. And that’s exactly what you get from this twenty-something amateur sleuth with a Police Chief surrogate father and a girlfriend an amusement park fortune teller machine said would be his forever. Both relationships are over-the-top fun with Dafoe’s Porter’s biggest daily challenge being to hatch up new lies covering Odd’s civilian butt when bodies pile up and Timlin constantly calling for updates on her boyfriend’s comings and goings as a cheerleader of rationality from her ice cream counter at the mall. Kooky characters like the ghost of his former teacher (Arnold Vosloo in a one-minute cameo) or artistic metallurgist Ozzie (Patton Oswalt) add brief flavor and you wonder whether they’d play larger roles in subsequent stories similar to how coworker Viola (Gugu Mbatha-Raw) provides a face for the larger hoard of potential victims here.

The special effects succeed in bringing the supernatural aspects to light—something you could say about most of Sommers’ work, whether enjoying the final products or not. Much of the environment they inhabit is shrouded in darkness to obviously help blur the line of reality/computer animation, but you can tell the filmmakers stretched their budget effectively (even without the reported $35 million Outsource Media Group allegedly kept for themselves). It’s the bodachs who steal the show, though, as fluidly translucent, skeleton-less monsters smoothly gliding about our plane, getting into the faces of unsuspecting people to discover who sees them and entering others to do their bidding. They become Odd’s markers to know where evil lurks and are incorporated nicely as a distraction since he cannot let them know he sees them despite always getting in his way. As for the performances, you get what you’d expect from a hugely popular paperback thriller. The aforementioned villain “Fungus” Bob acts a lot like he’s the brother of Vincent D’Onofrio‘s Edgar-suit-wearing bug creature from Men in Black, but the rest stay steeped in reality—or at least the off-kilter reality—necessary to buy this being our world. Dafoe becomes more of a punchline/pawn to the plot than anything three-dimensional while Timlin cutely provides the doting love that keeps Odd grounded rather than the strong partner her character sometimes alludes to being. Nico Tortorella and Kyle McKeever add local cop flavor, Mbatha-Raw a genuine friend to watch out for, and a bunch of nameless extras give us the whispers of an ignorant mass of lemmings unable to understand what it is Odd does for them.

In other words, everyone plays his/her part in service of the plot revolving around Yelchin’s lead. Complete with narration throughout, we follow his likeable Odd from the glossed over darkness of his mother’s “insanity” during childhood, the unheralded daily heroics chasing down killers with their victims’ ghosts in tow, and the day-to-day grind as a short order cook to hide in plain sight. The script doesn’t do him many favors by often making him verbally speak exposition any intelligent viewer already discerned by what’s shown onscreen, but Yelchin does his best to spin it all into Koontz/Sommers’ stylized universe. It’s the kind of thing you’d do in a kids show like Encyclopedia Brown and one more reason Odd Thomas should have been toned down for family friendly audiences. It’s simply too on-the-nose to be taken seriously as anything else.

Odd Thomas is in limited release on Friday, February 28th.