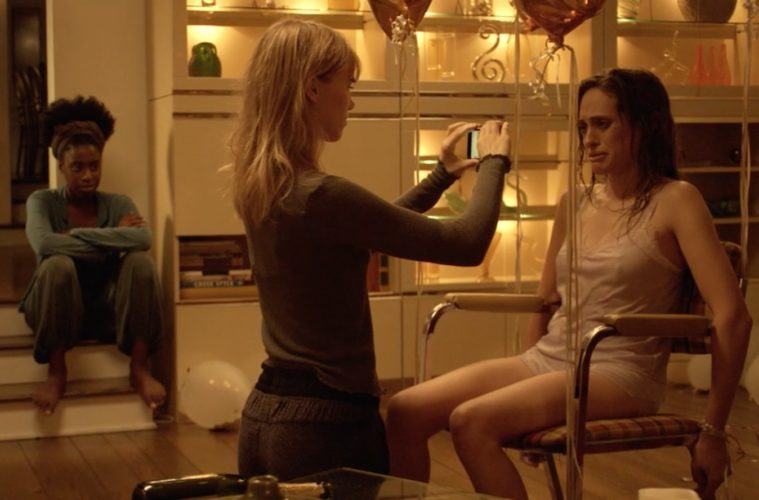 Review: ‘New Year, New You’ is Timely Horror About the Evolving Definition of Toxic Relationships

You cannot talk about Sophia Takal’s New Year, New You (the fourth episode of Blumhouse Television’s holiday-themed Hulu series Into the Dark) without mentioning producer Jason Blum’s reaction to a Twitter storm in October that stemmed from an interview wherein the low-budget financier relayed an erroneous statement that “there are not a lot of female directors period, and even less who are inclined to do horror.” Blum talked specifically about how he’s offered pre-packaged projects to women in the past who have turned him down—artists known for work that they’ve created themselves. So what about giving those filmmakers money to bring their own visions to life a la Jordan Peele and Get Out? What about betting on their creativity rather than a script already in his pipeline?

Is Takal’s feature-length television episode the first step towards making good on his apology? Yes. It comes with some caveats, though. One: it filmed between July and August of this year to place it in post-production when Blum was confronted online about his gendered oversight. This means that he didn’t pitch it as a result of the backlash nor think to mention it as a defense. Two: it isn’t receiving a theatrical release and goes out of its way to give Takal and first draft scribe Adam Gaines “teleplay” credit rather than “screen” credit. It therefore seems Blum is treating this as a work-for-hire gig on a tier below what he brings to theaters on the regular. So the “first female” marketing push proves disingenuous despite being true.

All this is to say I can’t help wondering what might have been if Blum gave New Year, New You more than a fifteen-day shoot and six-month turnaround before bowing online. What if Takal was given the room to truly make this script her own and develop it into something as intense and memorable as Always Shine? What if it wasn’t being released with all this baggage as an anchor around its neck or the “feature film” posturing that prevents it from being judged as an episode of an anthology series? Maybe it’s on me for refusing to ignore these extraneous details when talking about the finished piece itself. I’ll take some of that blame. Like Danielle (Carly Chaikin) says, “admitting guilt is a necessary step towards healing.” She says many such nuggets throughout the film thanks to her hot internet presence as a self-help guru to young girls and women around the globe. Think YouTube personality by way of Gwyneth Paltrow’s Goop or an effervescent version of Alex Jones who uses her extensive platform to hock wares that probably work more as a placebo manifestation of her positivity mantras than a result of true scientific merit. Danielle comes off as a performer, her shtick eaten up by impressionable girls soaking in the fortune cookie platitudes she throws around as a free taste to hook them into buying the “hard” stuff. Is it wrong? Probably. Is it harmless? Maybe. While not physically hurting her avid fans, Danielle is financially, emotionally, and psychologically extorting them with relish.

And this doesn’t sit well with her old high school BFF Alexis (Suki Waterhouse). We know this by watching as disdain takes over her face while the child she’s babysitting jumps on the couch, enamored by Danielle’s pixelated mystique. There’s a hint of jealousy behind it as Alexis explains she had wanted to go into show business before deciding to take a more altruistic path. Or as little Carly surmises: before her cheek found itself marred by a gruesome scar that brief glimpses at a darkened night years previous portend to hold an origin. Maybe Danielle played a role in this disfigurement or perhaps her success merely exacerbates the festering wound of what could have been. Either way, it’s easy to see Alexis is up to something unsavory.

Takal has fun setting the stage for this assumption by showing the faulty, blackout-causing electrical system in Alexis’ parents’ old home (where the nightmarish incident that haunts her occurred), lingering on a set of knives hanging in the kitchen, and ensuring there’s a lightning storm overhead as Kayla (Kirby Howell-Baptiste) and Chloe (Melissa Bergland) arrive for New Year’s festivities just as their car breaks down. The filmmaker wants our minds to go to dangerous places while utilizing these genre trappings as a means of deflection. Danielle is obviously going to show up despite her rising star and insane wealth, but what will her attendance bring? Will Alexis lean into talk of a nervous breakdown and weaponize her cutlery? Will Kayla and Chloe become complicit? Will Danielle deserve what’s wrought?

You’re better off knowing as little as possible going in because the first half’s mix of thinly-veiled malice and periodic bouts of nostalgic joy makes way for a pretty gnarly back-end that delivers exactly what you expect with a hint of table-turning. We learn Alexis might not have gotten the worst of whatever went down the fateful night that caused her parents to replace their windows with plexiglass. The happiness Kayla and Chloe share by reuniting with Danielle after so much time apart may find itself to be a tenuous façade ready to crumble. And this west coast social media maven has as much opportunity to prove herself depressed and longing for a return to simpler days as she does the psychopath Alexis soon declares she always was.

The result is a fascinating character study with a timely message that seeks to reveal how not all toxic relationships are romantic or sexual in nature. Takal and Gaines are diving underneath the artificial sense of trust and kinship today’s internet consumers have built with celebrities and the warped friendships we unwittingly crave from bullies we admire. It delivers the inverse of Ingrid Goes West‘s plot with greater success, inching closer to the anxiety-inducing loss of identity that Cam supplies. They’re showing us a glimpse at the monsters we all have the potential to become if one lucky break arrives to change the course of our future for the better. The more futile our situation seems, the higher the inclination to go the extra mile when opportunity knocks.

It’s the perfect duplicitous subject to satirize the daily occurrences of a new breed of “role model” using their platforms to target and profit off an audience’s insecurities. Takal finds that razor-thin line wherein subtle yet biting humor can co-exist alongside the darkly severe, brutal chop of the guillotine. The deaths that occur are swift and meaningful not because of who died, but because of who wields the knife and who benefits from its slice (these are rarely the same person). All four actors do well to toe that line, augmenting the scenario’s horror for those of us watching while also fulfilling their characters’ two-faced ambitions for each other. And while great as disposable TV consumption, the ending reinforces how these ideas might deserve greater purpose than that.

New Year, New You is now streaming on Hulu.