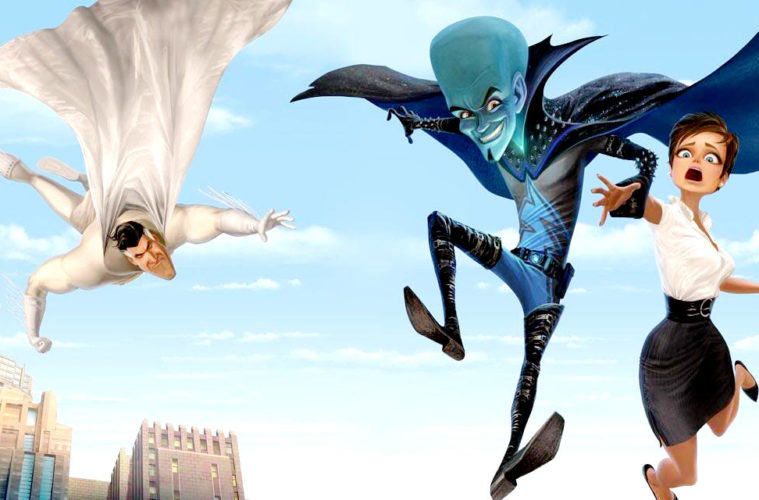 Megamind is no How to Train Your Dragon. On the upside, it’s also not Shark Tale or any other grunt-of-the-litter Dreamworks picture. This supervillain satire is more in the vein of Monsters vs. Aliens. There’s plenty of expected hit and miss moments, but it’s a surprising mild success. It swings heavily from being clever to on-the-nose and makes for a fluffy B-version of The Incredibles.

The set-up of this superhero/villain satire is taken directly from Donner’s ’78 Superman. When a planet is on the verge of destruction, a couple (one voiced briefly by Justin Theroux) send their son to the only possible place: earth. The child sent isn’t the hero though, but rather a villain with an oversized head and flamboyant fashion sense who coins the appropriate name Megamind (Will Ferrell). While the baby Megamind is on route to earth via mini spacecraft he crosses paths with Metro Man (Brad Pitt), the – from the looks of it – hero of the two. From infancy onward, they were enemies. Now as a adults, their battles are notorious amongst the citizens of Metro City (or as Megamind pronounces it “metricity”). Once he’s finally defeated Metro Man, he feels lost without direction in life. With no one to stop him, where’s the fun in easy destruction? Megamind must find a new hero to fill Metro Man’s shoes and quick to feel powerful and important once again.

What’s most fun about Megamind is how oddly adult and dark it is, thematically. This is a film that is utterly all about ego, jealousy, and people doing bad things. Yes, there’s the expected cheesy redemption in the climax, but what comes before is quite dark. For one, Metro Man is a fairly terrible message of a character. (Spoiler Alert) Metro Man fakes his death within the first twenty minutes only to reappear as a fraud to the protagonists Megamind and Roxanne Ritchi (Tina Fey playing the Lois Lane-esque love interest), and the message of his actions is total anti-Spiderman: with great powers, comes little responsibility.

Metro Man is mean-spirited character, but in a fantastic way. It’s saying that just because you have wondrous powers that can help humanity doesn’t mean you have to use them. Metro Man is the obvious villain at the end between the two, but how warped and how much of an ego maniac he is makes him one of the most fun-t0-hate type of characters in recent memory. (Spoiler Over) He’s the perfect satire of most superheros: someone that believes his powers are limitless and that he’s a savior of sorts. Having him voiced by a high A-list actor like Brad Pitt makes it even more funnier as well.

When Megamind is poking fun at superhero film conventions, it flies memorably. Where it falls flat on its face is when the usual Dreamworks pandering kids jokes come intro play, and that even goes for some of the intolerable music picks. With How to Train Your Dragon John Powell delivered the year’s best original score. Here we’re subjected to a forced and annoying soundtrack that features Michael Jackson‘s “Bad” to – prepare to be shocked – George Thorogood’s “Bad to the Bone”. These cheap, easy laughs are hard to bear.

Luckily, these misfires don’t outweigh the more clever moments; the highlight being an excellent Jor-El impersonation that any nerd will adore. Megamind was helmed by Tom McGrath, who’s behind both the Madagascar films, and here he’s delivered a much funnier and enjoyable film than his previous animated efforts.

What did you think of Megamind?