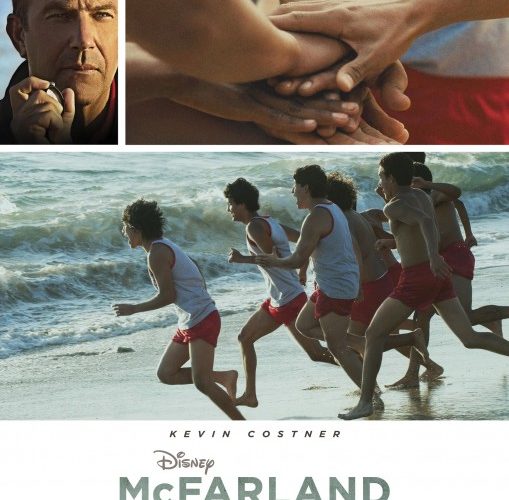 I entered the theater expecting McFarland, USA to be a Million Dollar Arm redux with Latinos in place of Indians. What director Niki Caro actually delivered was something more akin to Miracle—still not a “great” film per se, but definitely a worthwhile telling of a heartwarmingly Disney, sports-themed tale. While the studio that loves plastering “based on a true story” atop every bit of marketing material available to them didn’t do so with this property has me questioning the authenticity of what’s onscreen, seeing its characters’ real-life counterparts at the end does provide the confidence to at least declare it “inspired by” regardless of their own legalities. Either way, Christopher Cleveland, Bettina Gilois, and Grant Thompson have captured the exact form of athletic perseverance theatergoers love to see. And that means something. There’s a big difference between a film about sports and a sports film. While Million Dollar Arm was enjoyable in its own way, giving its lead role an angle beyond “the game” hindered it from being more than a throwaway one-and-done movie. Even if the story centers around the agent who facilitates the kids’ dreams at its heart doesn’t mean you should focus all your attention his way. The feel-good nature of this ilk isn’t whether the bottom-line salesman grows out of his Grinch-like stupor; it’s about whether the underdogs he assists find themselves on a path they didn’t believe was possible. Coach Jim White (Kevin Costner) might have something to prove in McFarland, CA, but it comes from a team standpoint rather than individual fame. He’s a coach and his boys come first.

With that said, he also wants to secure a job outside the run-down neighborhood a few locker room scuffles and misguided bouts of temper have left as his last option. But that’s not the reason he does what he does. Well, it isn’t what the film sets up for us to believe. If he somehow thought he could manufacture a cross-country team of which he, his runners, and his school have zero experience with into a state championship-caliber group when he knocked on Principal Camillo’s (Valente Rodriguez) door, he’s clairvoyant. White merely saw an opportunity to win after watching privileged kids skate by and prove unwilling to grasp the idea of hard work and pride. His newest batch of students breathes hard work so how couldn’t they appeal to his sensibilities as a man and coach? This means that McFarland USA is always coming from a place of genuine heart on behalf of all involved. It’s about giving “pickers” a chance to do something their families have worked so hard to provide. I’m talking early teens waking up at 4:30 in the morning to go to work before school who are then asked to run six plus miles afterwards before a few hours of sleep separate them from doing it again. And in a town where nothing good ever happens, White needs to convince their parents of what he’s doing too. They don’t want their children wasting hours of the day for a pipe dream that goes nowhere. It’s up to Jim to ensure there’s an endgame not only for them but McFarland itself.

There’s always going to be an appeal towards new opportunities that success offers and Disney wouldn’t have made this movie if it didn’t contain success. Just because White entertains such wooing, however, doesn’t belittle what he’s doing. It’s not an uncommon trope either—see the wonderful Friday Night Lights television show. He has a wife and two daughters to think about and despite all the good will he eventually earns, McFarland is still rightfully known as a town where people with the means to leave always do at the first chance. But while this seems like an angle, Caro and the writers handle its inevitability with equal care to that of the kids. After all, their success opens new doors too. College also means leaving the only life they’ve ever known. These are the stakes involved sports-wise and they probably could have sustained the runtime alone adequately. What puts the film into top-tier Disney with Miracle and Remember the Titans is that it gives more. There’s a personal side that goes beyond cliché into a cultural education on both sides. Respect is earned rather than taken as White learns the family values this Latino community has in spades and his runners learn they have the ability to do whatever the country-club bred kids from across the bridge do. That’s not to say the process isn’t full of cliché whether having a prison in town to taunt, a mature-beyond-his-years kid battling depression, or reformed gangbangers who trouble can’t help but find. The results of each trope find footing in a reality that overcomes their familiarity.

Costner is very good in his role as Coach White—never overly tasking and always willing to learn what it is his athletes go through. His evolution into a Jaime Escalante character is authentic with regression to racially motivated fear and hotheaded conclusions before all the facts are revealed. The same goes for the kids arriving with chips on their shoulders before buying into the program and the dream there for the taking. Ramiro Rodriguez provides comic relief as Danny, Hector Duran the likeable and earnest Johnny, Sergio Avelar the peacocking Victor, and Carlos Pratts the complex and stubborn Thomas oozing promise. It’s a lot of fun watching them and Costner embrace the type of work and pain they know too well, exceeding expectations and discovering the courage to do the impossible.